"We Came Here Carrying Our Children on Our Shoulders": Unforgiving Drought Displaces Thousands in Somalia 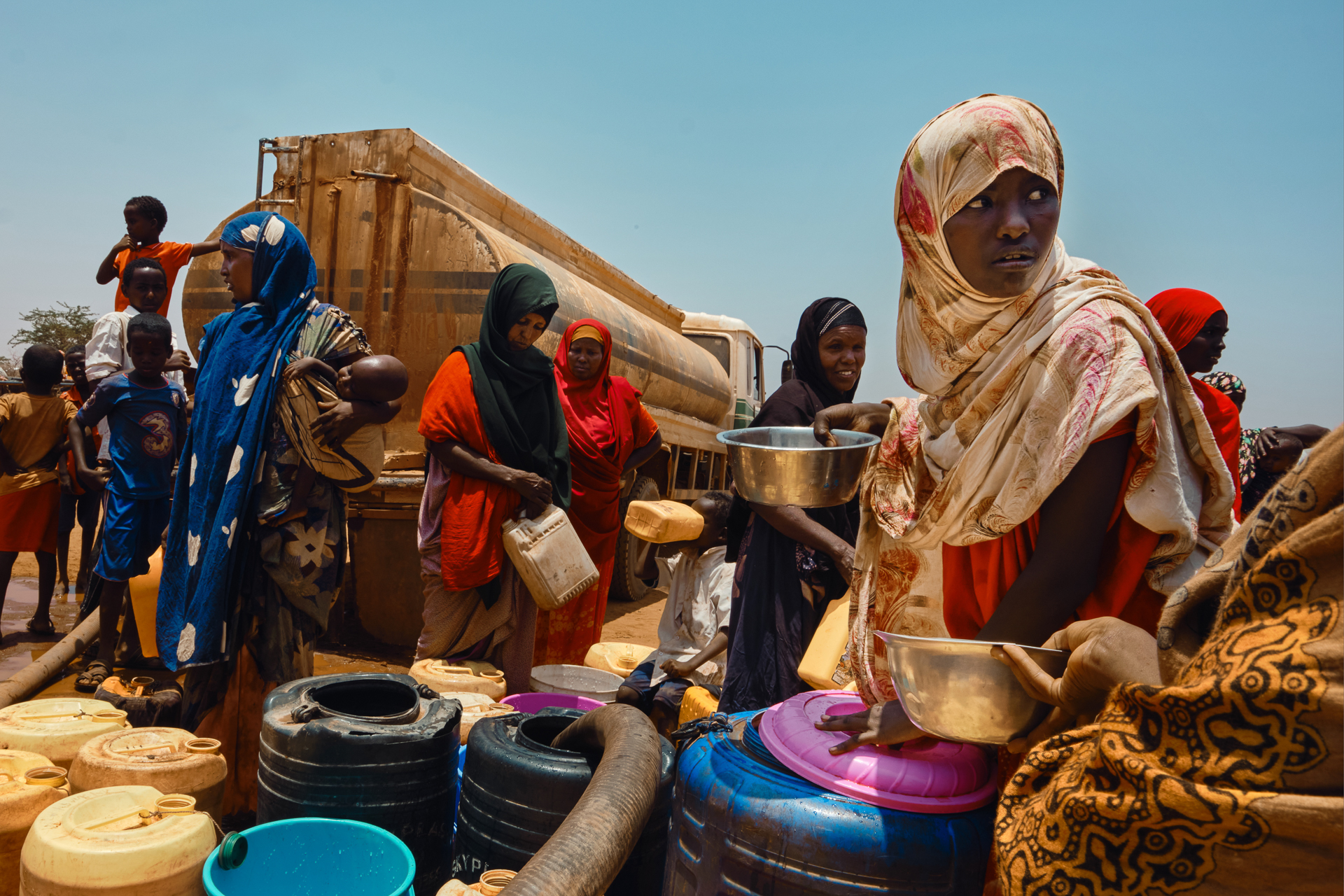 Millions of people are at risk of famine and forced displacement as the drought situation deteriorates in Somalia. For many displaced persons, water provided by IOM through trucks are the only way to access water. Photo: IOM/Claudia Rosel

Dollow, 3 June 2022 – Seven days walking in sandals under the scorching sun with barely enough water and food. Seven nights sleeping in the open, exposed to insects, predators and even thieves. That is how long it took for Aliyow and his children to find some relief. No matter how harrowing the journey is if you are running for your life.

“We came here carrying our children on our shoulders. People who were travelling in their vehicles picked us while we were walking on the road,” says an exhausted Aliyow, still recovering from the long journey.

Aliyow used to earn enough to care for his family doing menial jobs in his neighbourhood. But work has been scarce since the beginning of the year.

“Our clients did not have any money left. They spent the little they had trying to feed their drought-stricken livestock,” he said.

Aliyow is one of the over 771,000 Somalis displaced by an extreme drought ravaging parts of Somalia and the Horn of Africa. Like many others, he had no other choice than to pack what he could and leave his home, hoping to save his life and those of his children. 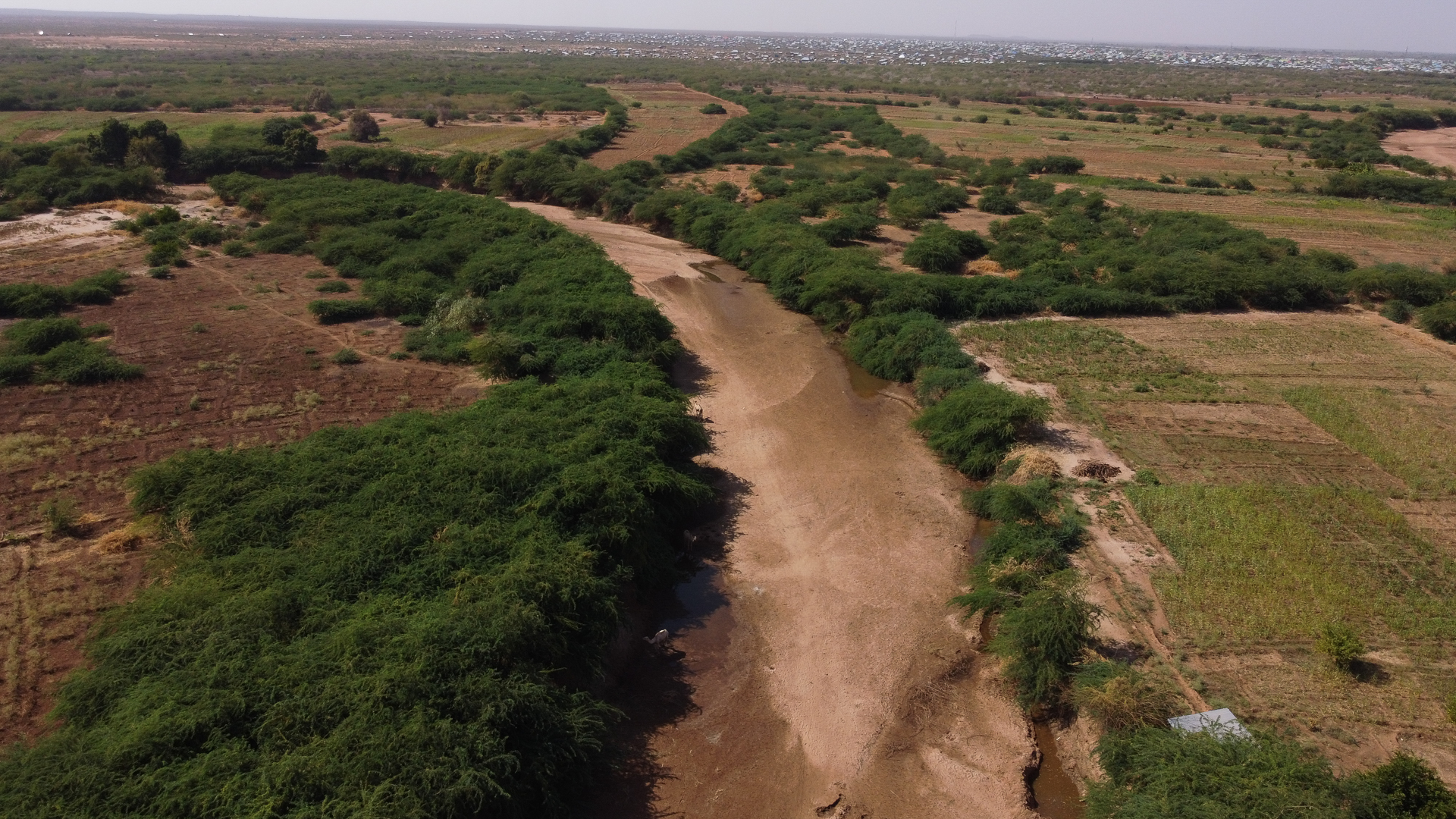 Rivers and water sources such as boreholes and shallow wells are drying up across the country as Somalia suffers its fourth failed rainy season. Dawa river in Dollow, photographed in March 2022. Photo: IOM/Zubeyr

The number of people affected is expected to rise in the next months. The Gu rains – which usually last from April and June – are once again below average. According to the United Nations, it is the longest drought ever witnessed in the Horn of Africa's recent history.

When Aliyow left his village, he went to Dollow – a small town ins Somalia’s Gedo region – where he hoped to find humanitarian support. Together with his family, they are among the more than 36,000 people who have arrived in Dollow since the water crisis worsened late last year. Dollow has been a stop of last resort for thousands of people fleeing climatic shocks and conflict throughout the years due to the presence of aid actors in the area. 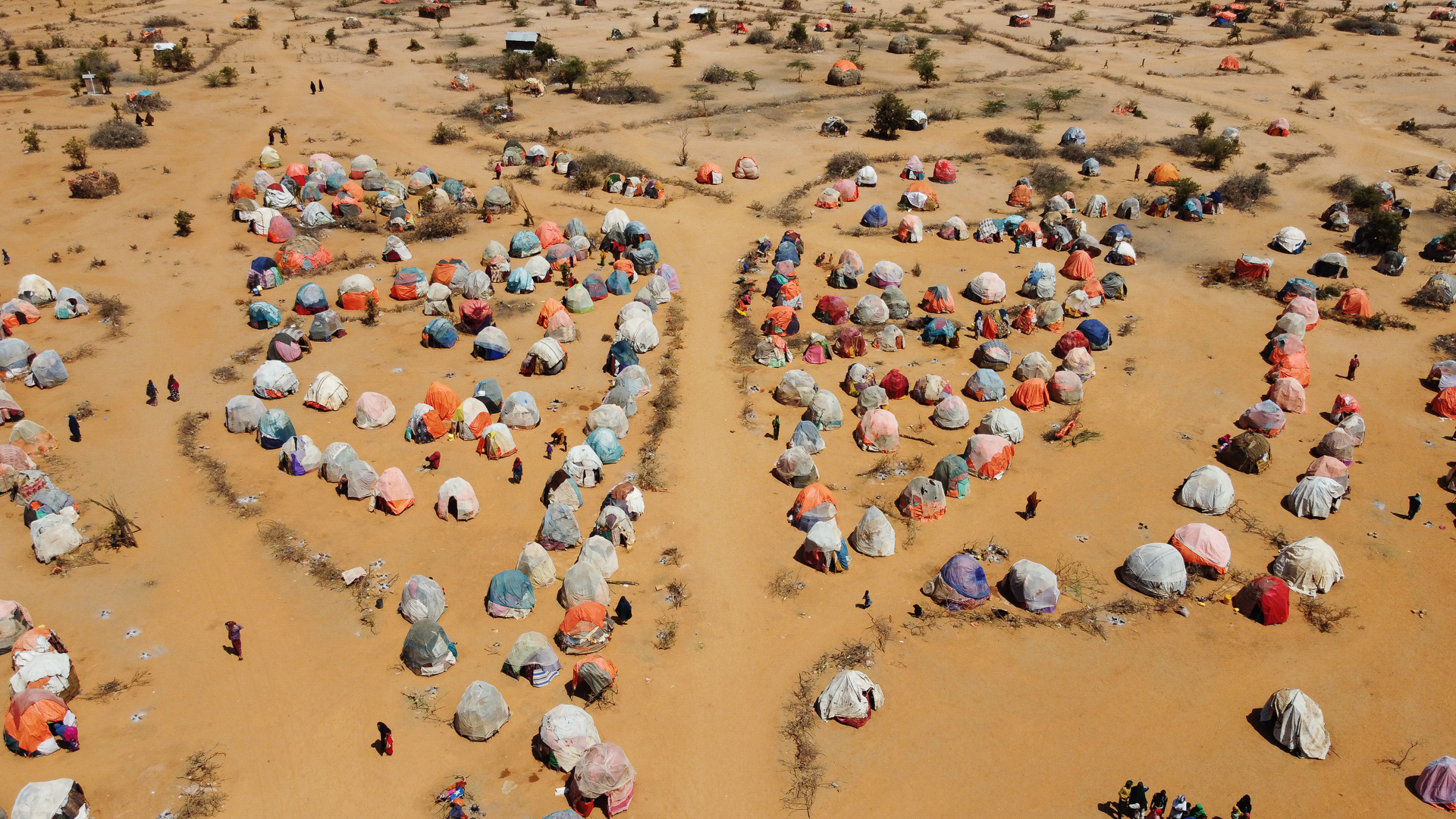 Most displaced people have settled in inadequate and precarious shelters that lack proper sanitation facilities. Cholera outbreaks have already been reported across displacement sites. Photo: IOM

Seinab runs a small food business in a local market in Dollow that was set up by the International Organization for Migration (IOM) in 2019 to support displaced women. Once a thriving business, Seinab has experienced financial losses for months now. With eight children to feed, the situation is becoming unbearable for the single mother and many others who have to make difficult choices as the drought situation deteriorates.

“Many have closed their businesses. They can't operate anymore. Prices of food have tripled in just a few months,” she said. “Only two of my children are going to school. I can't afford to pay for all of them.” 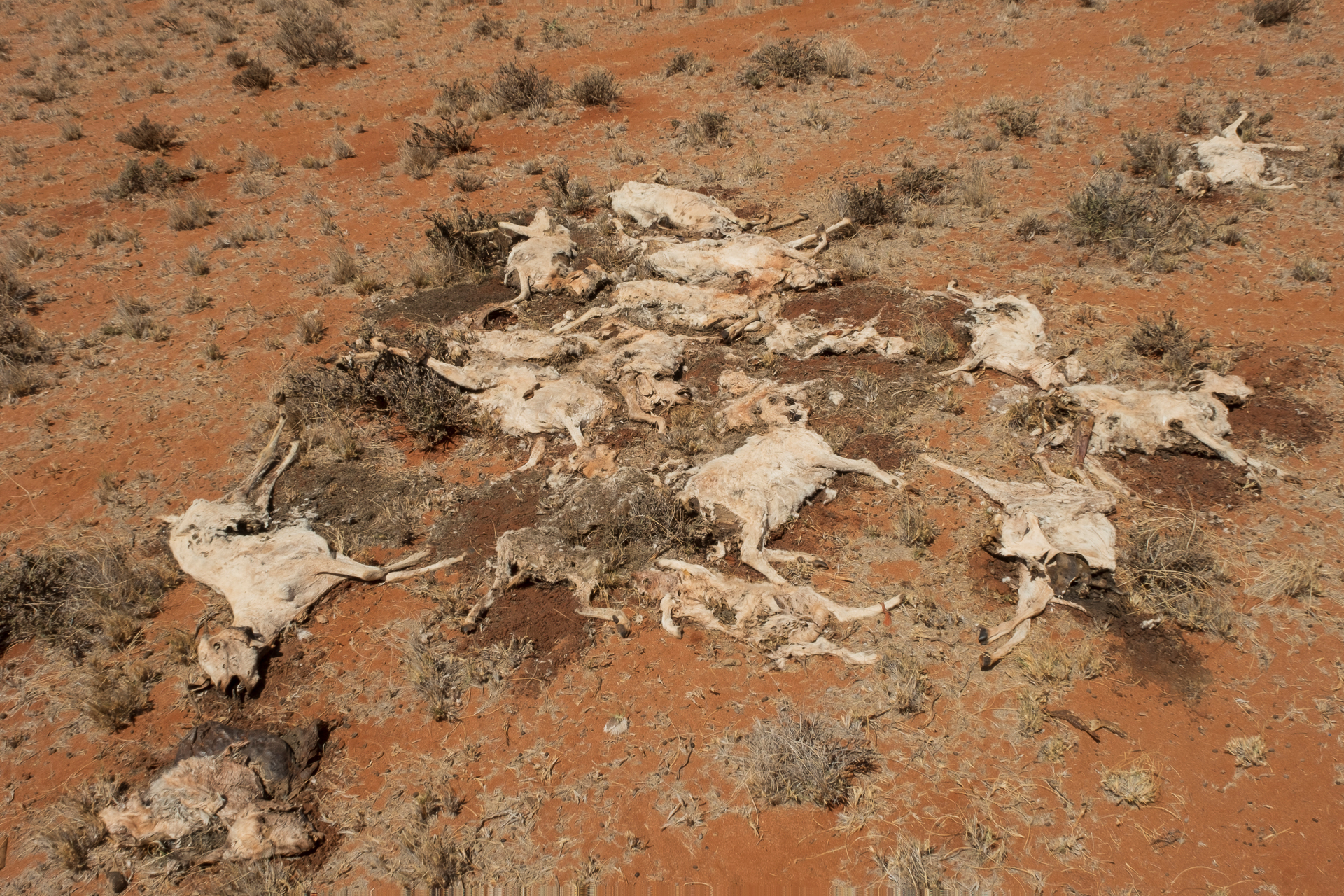 In the worst-affected areas of Somalia, the Famine Early Warning System Network estimates that 1 out of 3 livestock have perished since mid-2021. A herd of camels that died from starvation was photographed in a rural area of Galmudug in February 2022. Photo: IOM/Ismail Salad Hajjidirir

Millions of people face extreme hunger and there is a risk of localized famine if food prices continue to rise, and humanitarian assistance is not scaled up in weeks ahead.

“We came here because of hunger. I was a farmer and was herding animals, but I lost 27 goats and three cows due to this drought. I don't have anything to feed my children,” said Darur, a father of four who made a 400 km journey to Dollow.

IOM is working in Dollow and other areas across the country, providing much-needed life-saving support to thousands of people. IOM has reached over 350,000 affected people with humanitarian assistance and protection services, including water, hygiene kits, shelter, cash, health and information. 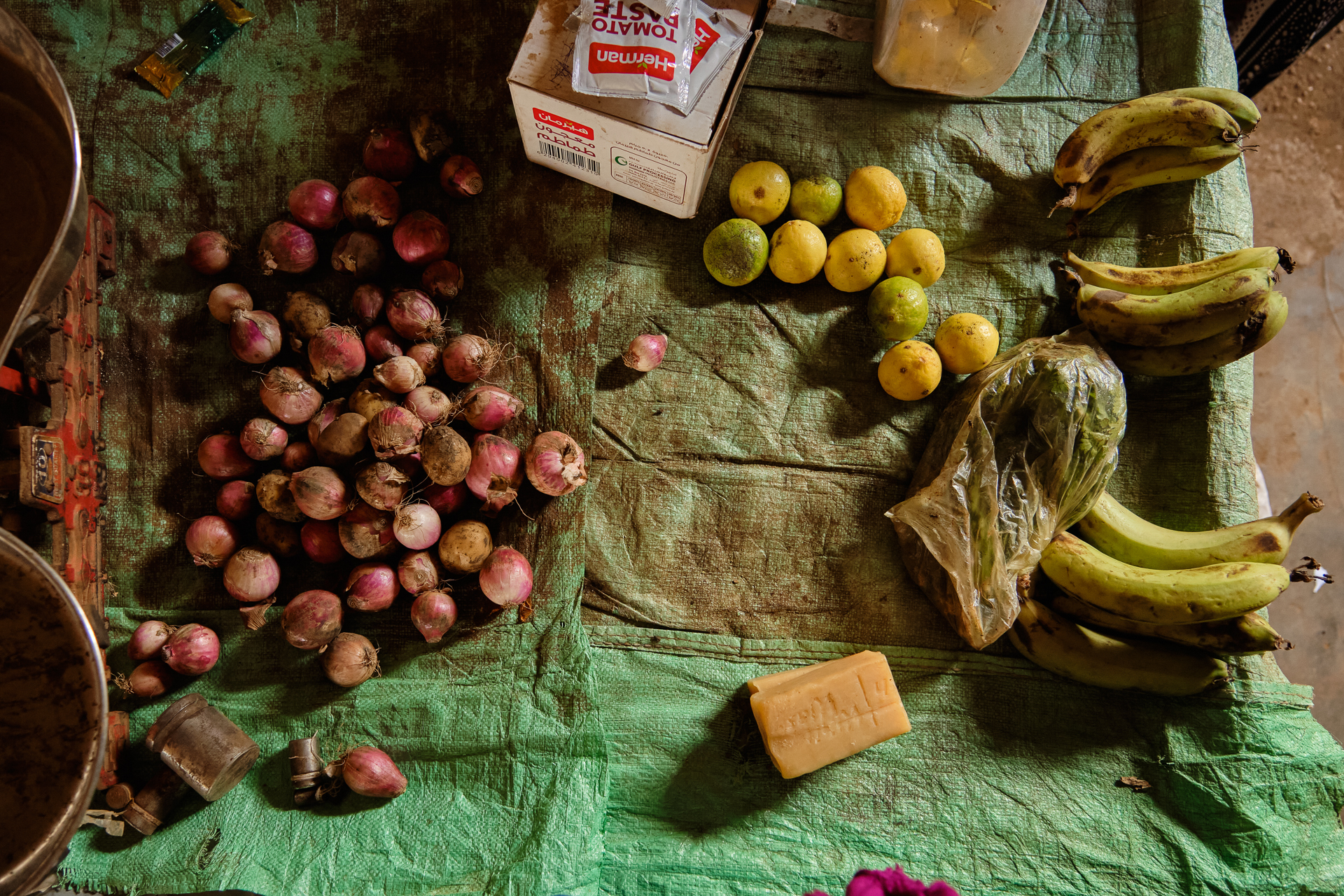 Food prices have skyrocketed since the water crisis started. In Kabasa's Women Market in Dollow, women business owners like Seinab struggle to make ends meets and are reducing the items they have for sale to prevent further losses. Photo: IOM/Claudia Rosel

“We have constructed and rehabilitated boreholes and shallow wells across the country, reaching people where they reside to reduce displacement as well as those who, unfortunately, have been already displaced,” said Mohamed Abdelazim, IOM Somalia Senior Programme Coordinator.

In April, IOM launched a Minimum Response Package (MRP) in partnership with the United Nations Children’s Fund (UNICEF), the World Food Programme (WFP), and other partners to reach another 90,000 displaced persons considered as extremely vulnerable.

The support provided so far has revealed how crucial it is to act urgently to save lives. “We received some assistance from IOM, they started water distribution today,” said Aliyow. “They also gave us containers for water collection, buckets, soap and chlorine tablets.” 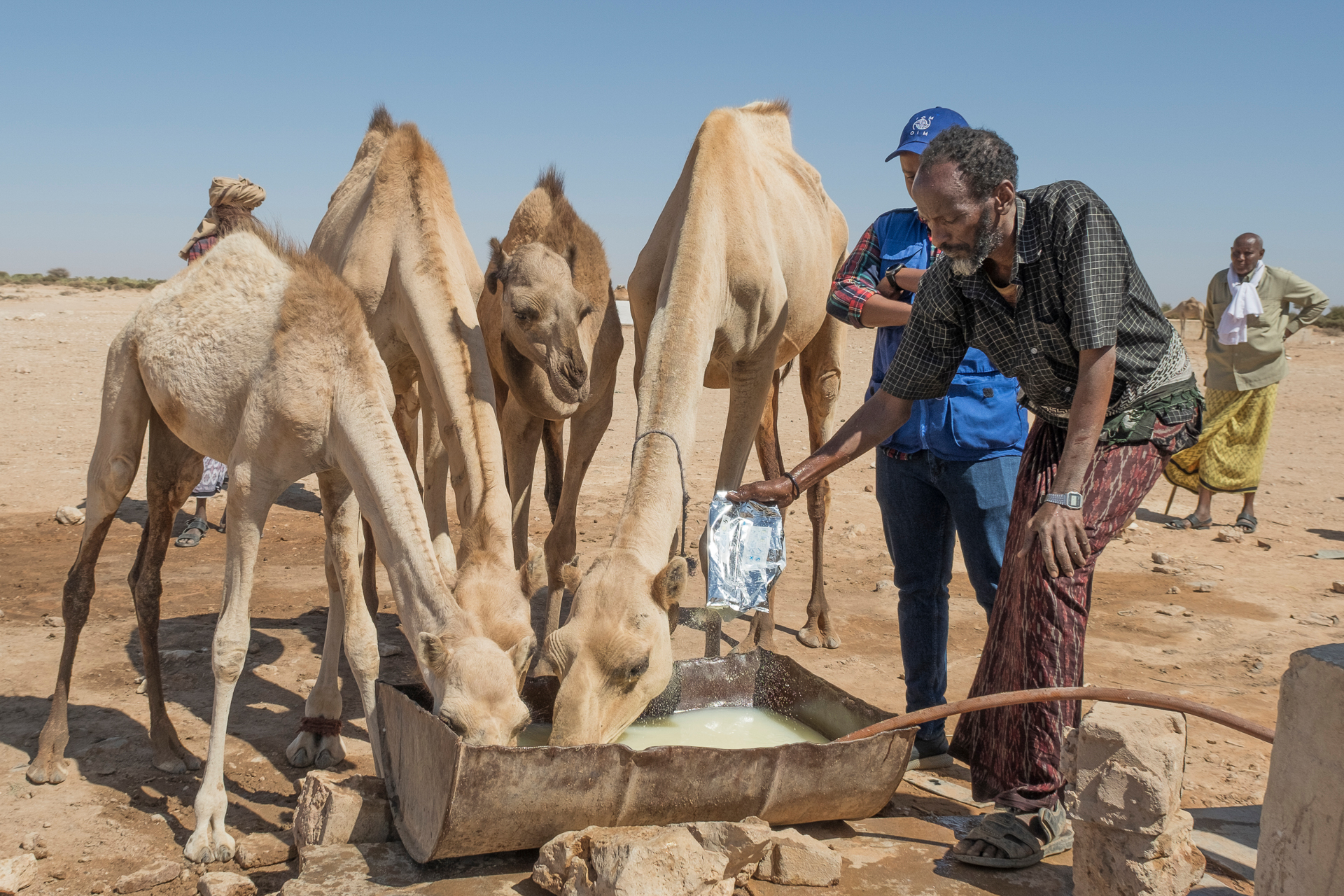 “These camels are my only hope in this life. If the land dries up because of the drought, I have to feed them like my children until God’s help comes,” says Abdi as their camels drink from a borehole rehabilitated by IOM in Galmudug State. Abdi added porridge to the water so that the camels could also get the nutrients they need. Photo: IOM/Ismail Salad Hajjidirir

But despite efforts to alleviate the suffering, the needs are outpacing the available resources. Acute water shortages, the death of livestock, crop failures and rising food prices are aggravating the needs of millions who were already suffering from years of conflict, recurrent climate shocks and disease outbreaks.

Even before this drought, there were already 2.9 million internally displaced persons (IDPs) due to conflict and climate change who were facing a myriad of protection and life-threatening challenges.

IOM is asking for USD 66 million to reach over 1 million people in Somalia with a multi-sectorial package of assistance by the end of February 2023. The funding gap must be addressed urgently to prevent the worst outcomes.

This is not the first drought Aliyow experienced. Somalia has suffered three major drought crises in the last years, in 2011, 2017 and now. Aliyow is certain that this is the worst of them all. 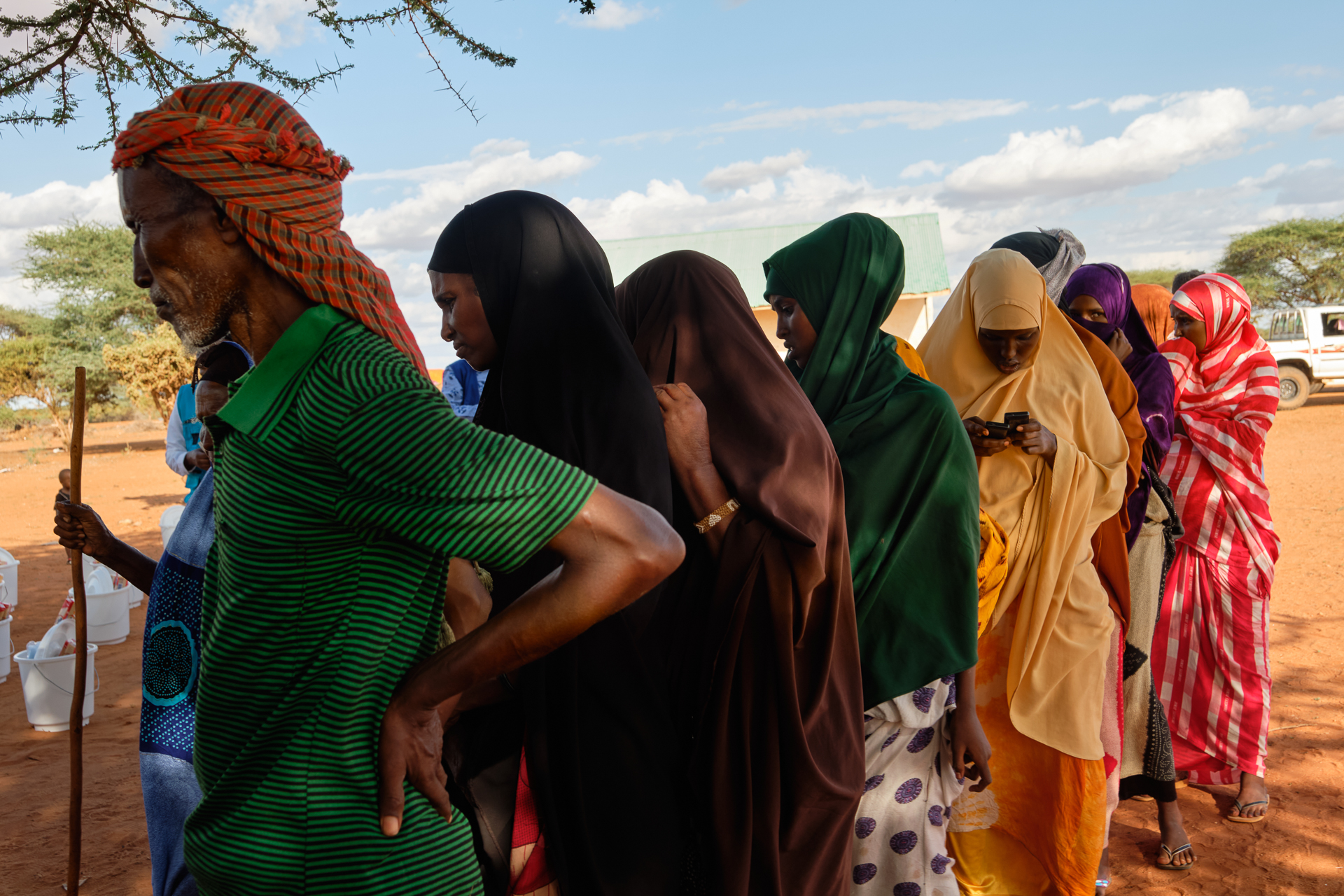 Displaced persons lined up in a displacement site in Dollow to receive hygiene items being distributed by aid partners. IOM and others register new arrivals to ensure assistance can reach as many people as possible. Photo: IOM/Claudia Rosel

“The difference between this drought and the previous ones is that the former used to leave something behind. This drought didn't spare humans nor animals,” he said.

In 2011, the world failed to respond on time to the extreme drought that took the lives of 260,000 people, most of them children. Somalis still recall the horror of those years in which the international community did not act quickly enough, even though the warnings were there. Governments and aid agencies took a different approach to respond to the 2017 drought and a collective response showed a major catastrophe can be averted if help is scaled up fast. 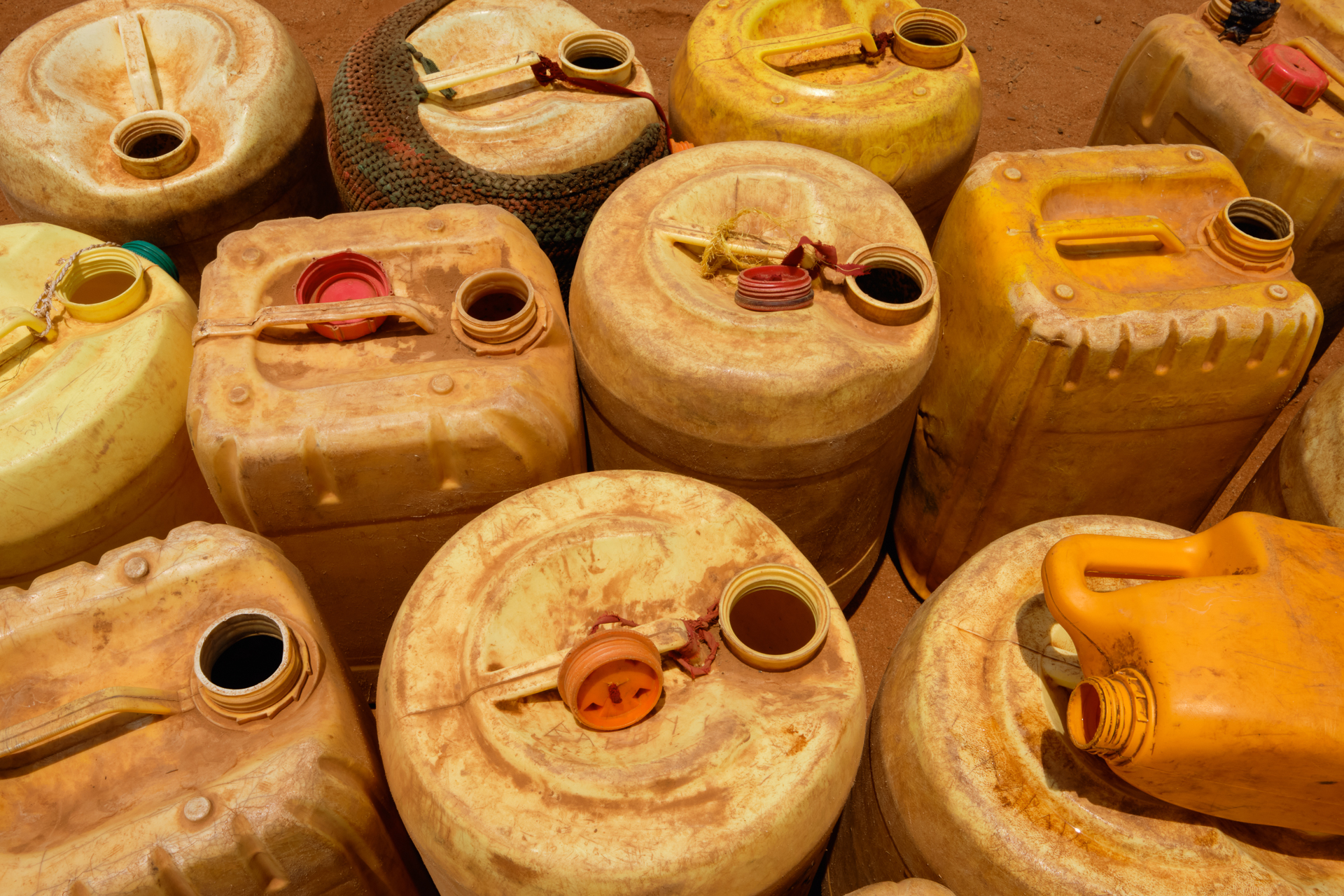 Among the hygiene kits that communities receive, there are jerrycans so people can fetch and store water. Photo: IOM/Claudia Rosel

Despite Africa being one of the least contributors of greenhouse gas emissions worldwide, the effects that climate change is having on its population are devastating. Of these, Somali pastoralists and farmers – which make up most of the Somali population – are suffering some of the worst consequences of the climate crisis.

Periods of extended drought, flash floods, erratic rainfall and cyclones, combined with deforestation, overgrazing, soil erosion and desertification, are making the survival of communities that depend on natural resources more difficult each year.

Many Somalis have given up their nomadic lifestyle. “Ways of life that have existed for hundreds of years are being lost forever,” said Abdelazim. “Most of the displaced were herders, they lived from the land and their camels. Now all that is gone.” 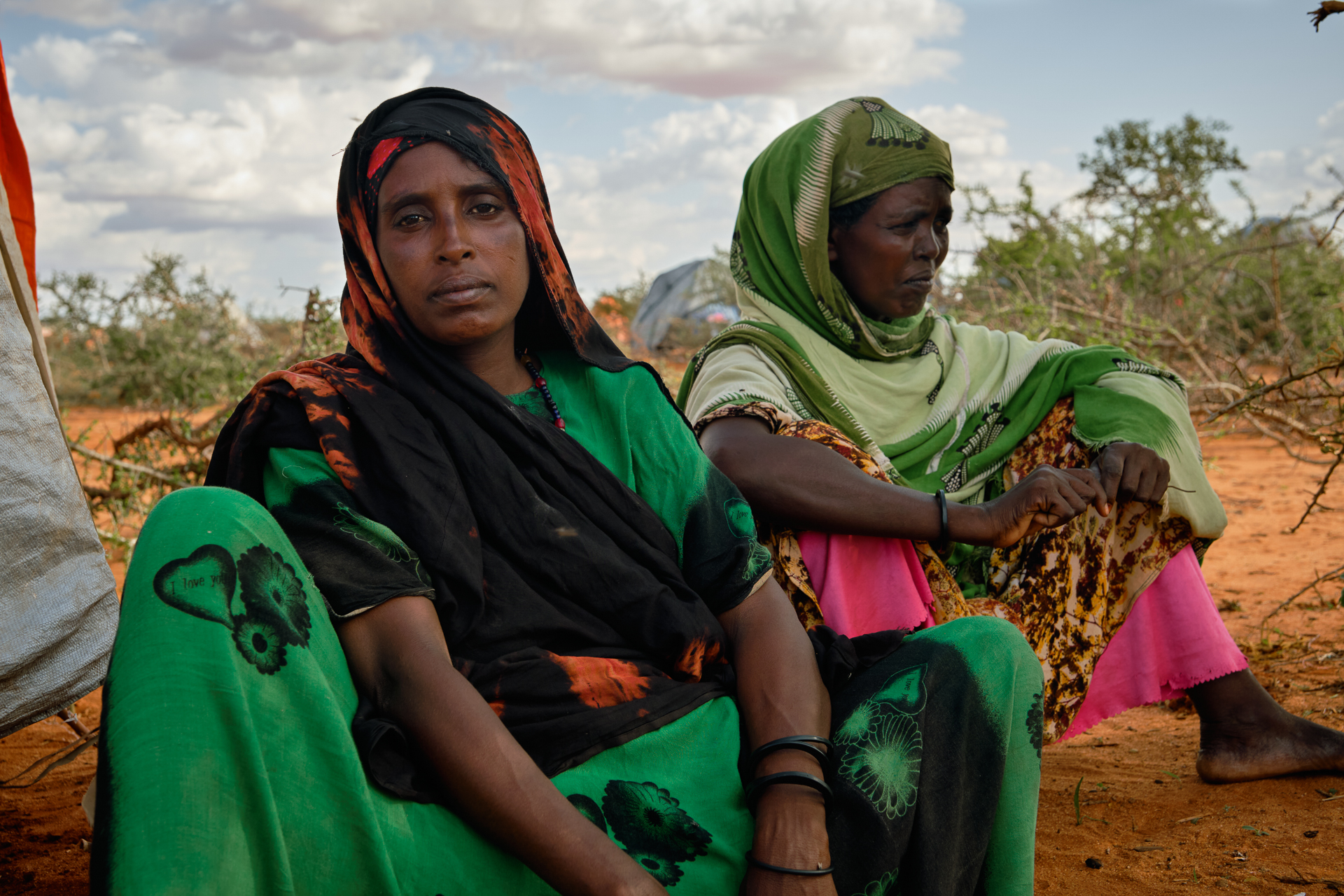 Rahma Ali, 28, arrived to Dollow from rural Somalia with her sister and children in search of humanitarian assistance: "I don´t have a place to sleep today." Like most displaced persons, Rahma came with almost no belongings. Photo: IOM/Claudia Rosel

Reduced access to water and natural resources is increasing violent conflict. In February this year, at least 15 people were killed in armed clashes over ownership of grazing land in Somalia's Sool Region.

IOM is supporting communities to mitigate natural hazards and environmental degradation. Initiatives implemented by IOM aim to build people's resilience and safeguard livelihoods to ensure communities can work together to adapt to a warming world.

Communities in the Horn of Africa living on the frontlines of climate change are the human face of the climate crisis. We must heal our planet and take action globally to prevent the most vulnerable from paying the highest price. The world should work together to protect lives. 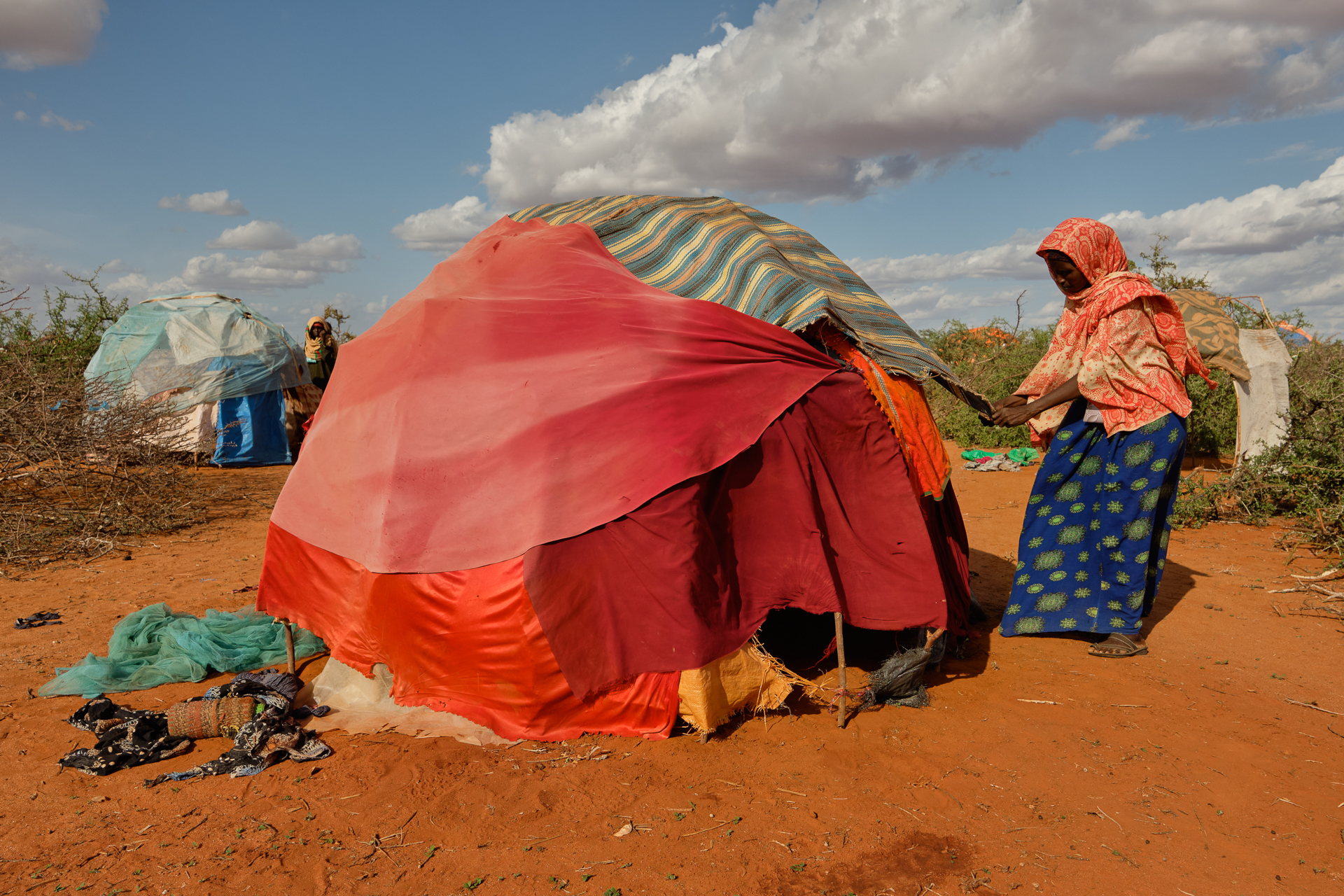 A woman builds her makeshift shelter in Dollow after arriving to the site. Like many others in her situation, she has to build her shelter with materials she can find in the area. Photo: IOM/Claudia Rosel

IOM drought response in Somalia is possible thanks to generous funding from the European Union, the UK's Foreign, Commonwealth and Development Office (FCDO), the Government of Japan, USAID's Bureau for Humanitarian Assistance (BHA) and the UN Central Emergency Response Fund (CERF).