Triffonie, a displaced woman in the Kigaramango site of Gatumba, Bujumbura rural province, shelters herself from the sun with her children. Photo: IOM 2021/Armel Nkunzimana

Gatumba, 11 Nov 2021 - While world leaders are convening in Scotland for the 2021 United Nations Climate Change Conference (COP26), Burundi’s displaced populations are desperate for help – not five or ten years from now, but today.

The country’s 12 million inhabitants are already suffering the consequences of the devastation caused by natural hazards such as floods, landslides and earthquakes occurring throughout the small, landlocked country. These occurrences account for 85 per cent of internal displacement in Burundi. Near the capital Bujumbura, in the Gatumba region alone there are 50,000 people currently displaced from floods that have become more frequent and intense due to the changing climate.

Triffonie, a 28-year-old widowed mother of two, recalls the night floods swept through their house. “It was a normal night, we were sleeping. No one knew what would happen [next],” she narrates. “We heard a lot of noise in the street; alarm whistles, banging on pots, cans, and drums, it was the first time I heard the drumbeat so late.”

Heavy rains that had been pounding the region resulted in rising levels of floodwater. Triffonie woke her children and ran outside alongside her neighbours to find several houses already collapsing; more would follow. What was once a safe place for Triffonie’s family was now a death trap.

Since that terrible night in May, Triffonie, her two children, and over 52,000 others affected by the floods in Gatumba saw their lives turned upside down. Lake Tanganyika was overflowing from the torrential rains. Similar floods swept away about 10,000 homes in Gatumba in the spring of 2020. Three of the 14 schools in the district were damaged so badly they had to close.

Triffonie’s house eventually crumbled to the ground as well, leaving her and her children homeless.

Since 2018, 445 disasters in Burundi have affected nearly 270,000 people, 100,000 of whom were displaced. The International Organization for Migration (IOM) Burundi’s Displacement Tracking Matrix has recorded an astonishing 168 natural hazard situations since 2020 alone – including torrential rains, floods, landslides, hailstorms, and strong winds.

Experts forecast a potential increase in rainfall in the western regions of Burundi which drains towards Lake Tanganyika, indicating that the situation could worsen in the coming months for vulnerable populations living along the lake’s coast and the rivers draining into it.

“I had a roof over my head, as a farmer, I could support myself and my family but in one night I lost everything. I now live in an emergency shelter not knowing where my next meal is going to come from,” explains Triffonie.

Severa Bigirmana, a 46-year-old married mother of five, has also been displaced by the floods that occurred in May. “Water invaded our place. We had to move, leave our home and rent a house in a dry neighbourhood,” Severa recalls. “But later that month, huge floods occurred and destroyed everything we had – our house, the house we rented, our fields, our crops. I used to be a farmer but now I cannot work because my fields were flooded and my crops destroyed.” 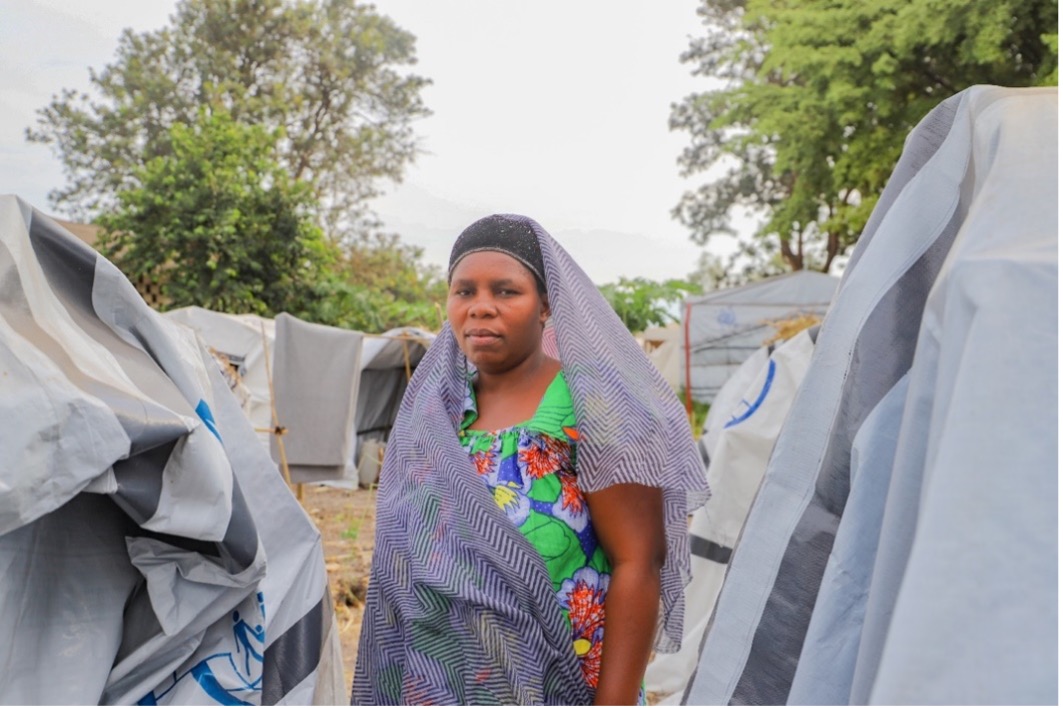 Severa, a displaced mother currently sheltering in the Sobel displacement site of Maramvya, Bujumbura province, lives separately from her five children to ensure they can continue to attend school. Photo: IOM 2021/Triffin Ntore

Over 90 per cent of Burundi's population relies on subsistence farming. Thousands have lost their crops to natural hazards, risking their livelihood, and exposing them to extreme vulnerability. Future recurrent disasters that await will only exacerbate a situation marked by the already strained livelihoods.

For people like Triffonie and Severa, who lost everything in the space of a few minutes, water, shelter, and food become primordial. Many have already resorted to taking huge risks daily just to survive.

Severa made the difficult decision to live far from her children so they would not have to endure the conditions within the displacement site. “I live with my husband, separated from our kids. We found shelter for them in a dry neighbourhood to allow them to continue school.”

Some children affected by the floods are not as lucky. Unable to feed and provide for their families, many of the displaced find themselves in a precarious situation where they are forced to send their children to work for shelter and food. Most of the children are sent to work for friends, neighbours or family members and in return the children are provided with food and a place to sleep.

“The most common form of exploitation we see in this context is forced labour,” explains Grace Kaze Diane, Protection Officer for IOM Burundi’s Migrant Protection and Assistance Unit.

Food insecurity often increases the vulnerability of the affected, predisposing them to sexual exploitation. Humanitarian actors working in displacement sites in Burundi or in communities affected by or as a result of disasters have reported an increase in gender-based violence (GBV), exploitation and abuse as a result of limited resources.

Women and girls face the risk of harassment or are sexually abused on their way to fetch wood or water. The lack of private space in displacement sites can also mean psychological trauma to children. Burundi is seeing a growing number of persons living in already impoverished communities, in need of disaster-related relief, making protection mainstreaming even more important. Protection remains central to humanitarian efforts. Internally displaced persons, along with refugees and stateless persons, are on the frontlines of the climate emergency. 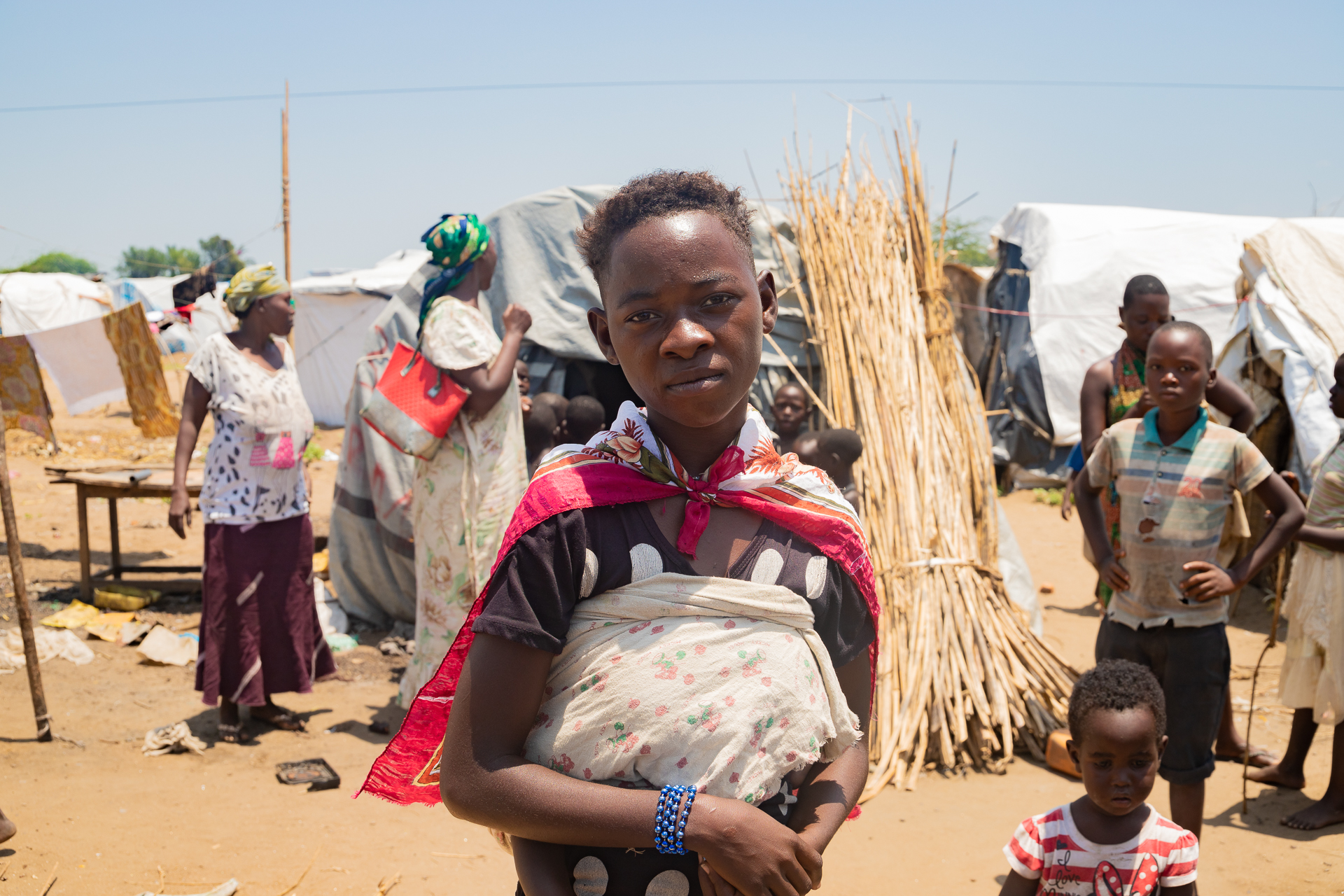 Esperance, one of the survivors of the floods in Gatumba (Bujumbura Rural province) poses for a picture with her baby on her back. Photo: IOM 2021/Armel Nkunzimana

In response to this, IOM in Burundi is working with the government and partners to provide safe drinking water, sanitation and hygiene services, shelter, food and non-food items, dignity kits for women and girls, psychosocial counselling, cash distributions and trainings on financial inclusion and entrepreneurship, and more.

IOM Burundi has referred over 4,500 children for protection assistance, built 275 shelter structures and 16 hangars (that can accommodate 302 families), and handed out more than 800 non-food item kits since November 2020. It has also distributed financial aid through a rental support programme that has helped 1,576 families to temporarily relocate to safer areas, thanks to funding from the Central Emergency Relief Fund (CERF) and the European Union (EU).

Alongside these protection-centered efforts, IOM Burundi and Oxfam are jointly implementing the most comprehensive disaster risk reduction (DRR) project, funded by the EU. The DRR and protection teams at IOM Burundi are working together to ensure their activities overlap and complement one another. 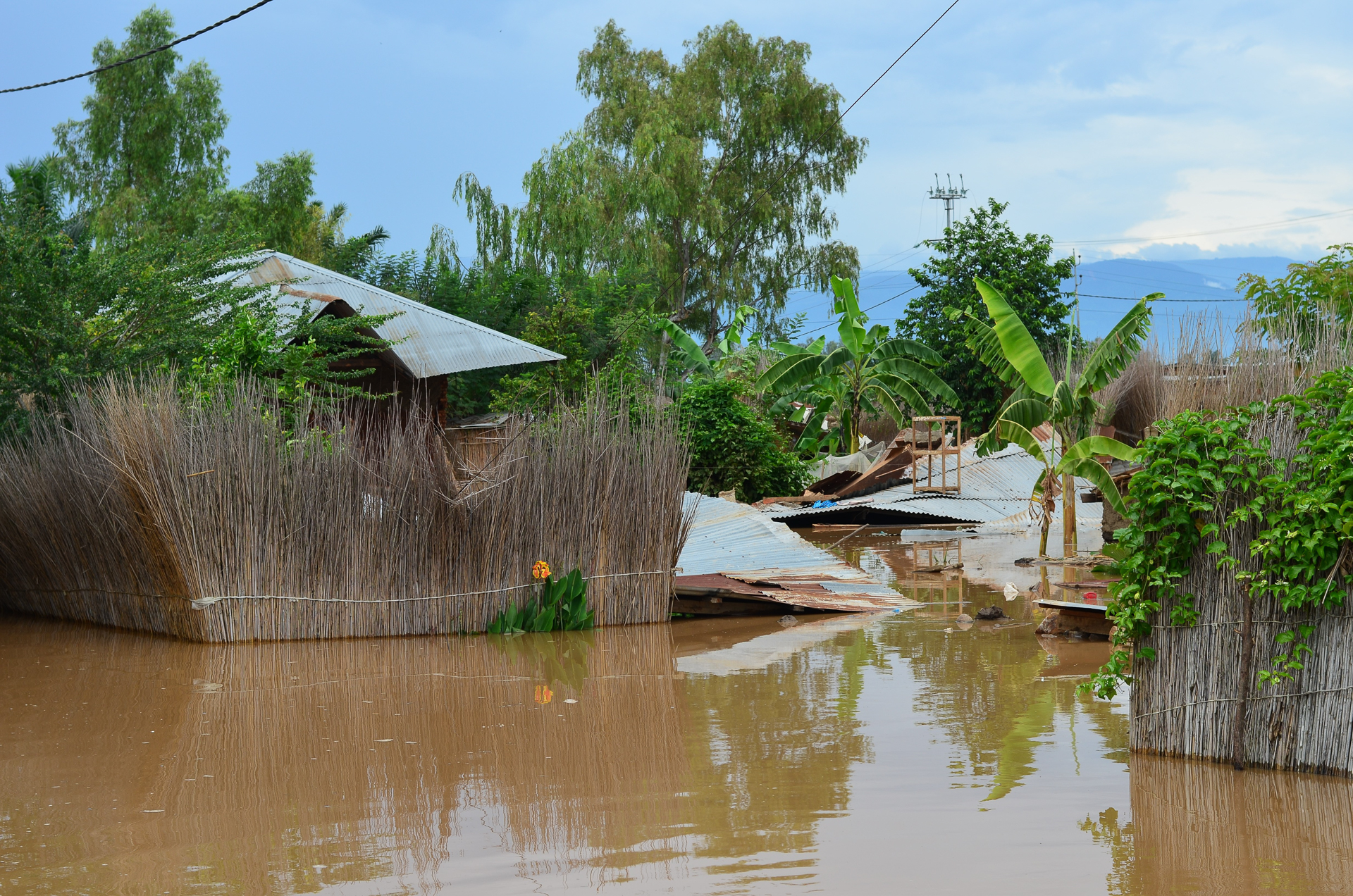 Gatumba was particularly affected by rain-induced floods that occurred in the spring of 2020 and 2021.  Photo: OCHA 2020/Lauriane Wolfe

“Adverse effects of climate change have intensified the frequency and severity of sudden and slow-onset hazards such as flooding in Burundi. These floods displace thousands of people each time they happen, devastating livelihoods and creating direct threats to their safety,” explains IOM Regional Director for East and Horn of Africa, Mohammed Abdiker. “Children, especially young girls, are even more vulnerable in these conditions. Therefore, any migration management and climate change action must include integrated human rights-based, child-sensitive and gender-responsive approaches.”

While global leaders try to pave the way for future climate action at COP26, solutions are needed now for Burundi’s most vulnerable displaced. USD 16.5 million is still needed to provide shelter, protection mainstreaming, mental health and other lifesaving support for over 130,000 people currently displaced throughout the country.

Until the world turns its attention to people like Triffonie and Severa, and their children, they and thousands of others will continue to suffer the already present consequences of climate change.

This story is written by Lauriane Marie Wolfe and Armel Nkunzimana from IOM Burundi, email:  IOMBurundiPDSU@iom.int, and Amber Christino, Media and Communication Officer at IOM Regional Office for East and Horn of Africa, email: achristino@iom.int.