Beyond All Odds: Raimany’s Journey of Perseverance with Albinism in Mozambique 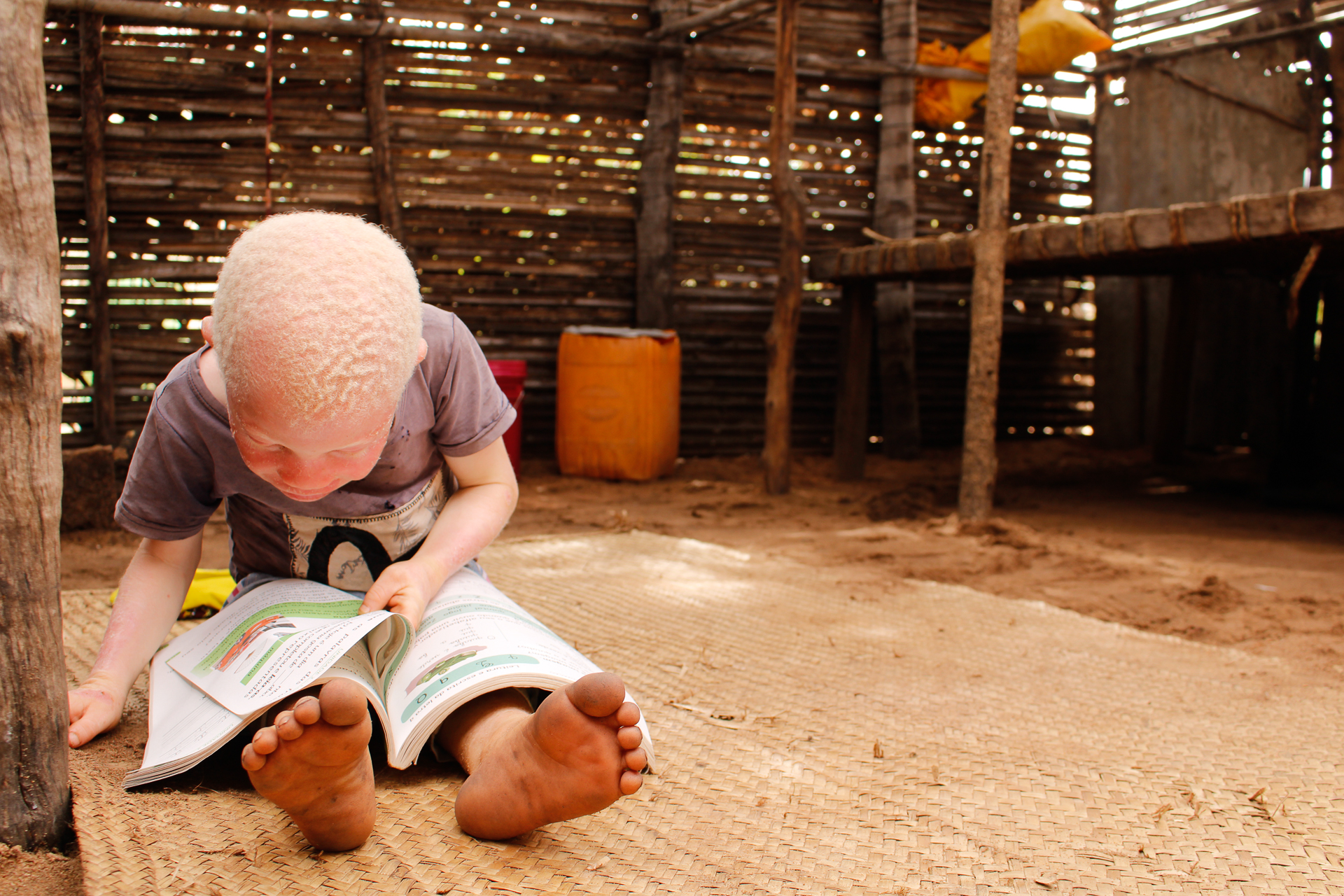 In anticipation of his first year of school, Raimany reads his older cousins’ books each day. Photo: IOM/María Toro

Pemba, 17 June 2022 – Five-year-old Raimany is playing with his friends, unaware of the complexities of his skin colour, just one innocent child among many.

His journey of perseverance started early; his mother died in childbirth in the far northern province of Cabo Delgado, Mozambique. His father raised him by himself, grappling with Raimany’s health needs as a person with albinism, and the discrimination and threats of physical violence he might face.

Albinism is a rare, non-contagious, genetically inherited condition present at birth, which results in little or complete lack of melanin in the hair, skin, and eyes, causing vulnerability to the sun and bright light. As a result, people with albinism may be visually impaired and are more prone to developing skin cancer.

While there is no cure for the absence of melanin that is central to albinism, protecting the skin and eyes from the sun and watching for any changes in the skin can help. In Fiji, for example, thanks to a government initiative, people with albinism can now access free sunscreen at local hospitals and health clinics.

Although there is no accurate data on the exact number of people living with albinism in Mozambique, most of them live in fear of being kidnapped and mutilated. Due to their daily struggles, many albinos in Mozambique do not finish school and struggle to integrate in society.

The province of Cabo Delgado, as many others in Mozambique, is engulfed in taboos. Albinism is still greatly misunderstood, and people with albinism across the world face multiple forms of discrimination. The physical appearance of persons with albinism is often the object of myths and superstitions, which often lead to marginalization, stigma, discrimination and hate crimes. 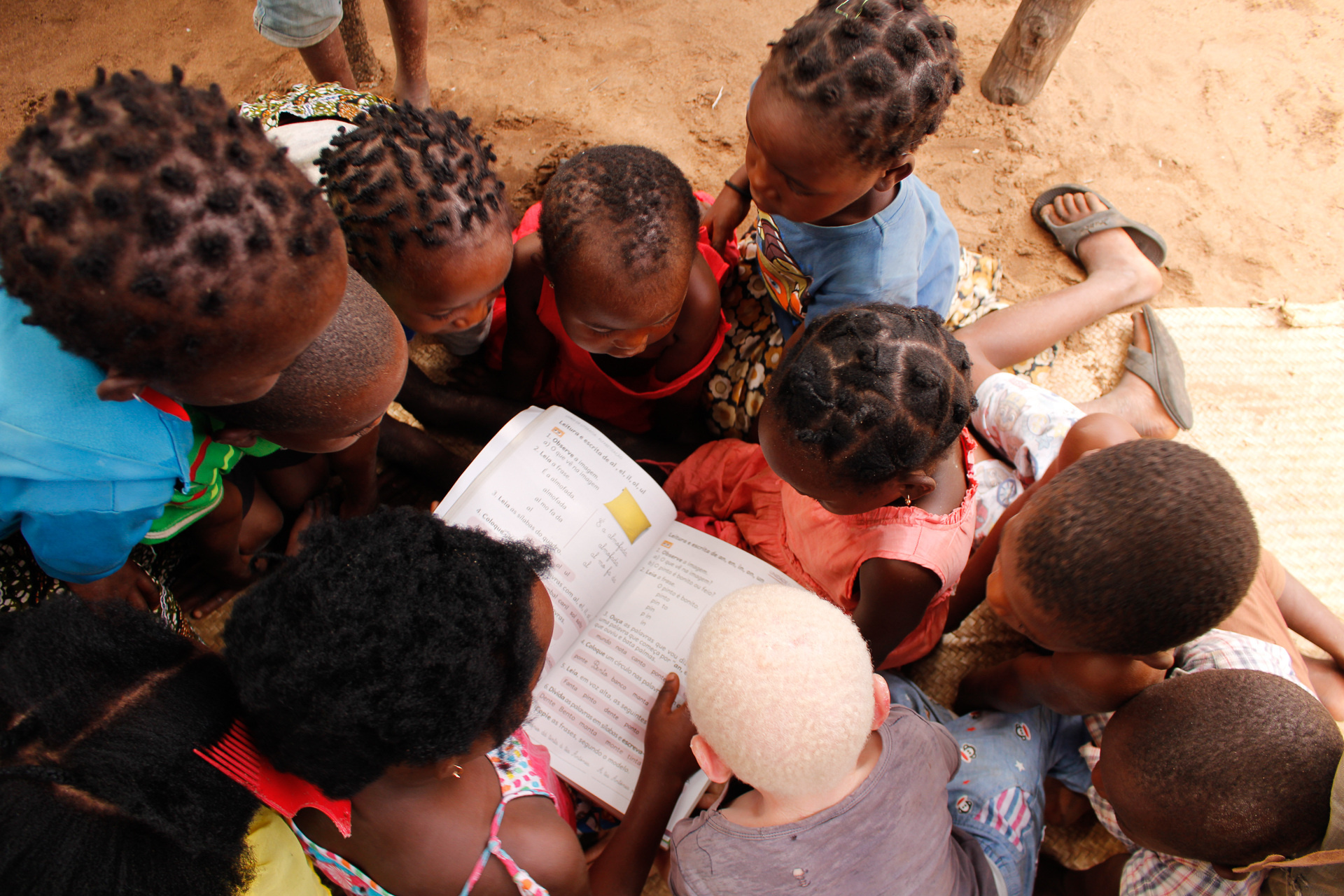 It is estimated that in North America and Europe, 1 in every 17,000 to 20,000 people have some form of albinism, although the condition is much more prevalent in sub-Saharan Africa. Photo: IOM/María Toro

In 2015, the Government of Mozambique adopted a Multisectoral Action Plan on Albinism to guide the implementation of measures to address the human rights and development challenges faced by people with albinism in Mozambique. Despite the efforts, access to health care and legal protection remains challenging for them.

To support the Government with its efforts, a two-year project for the protection and promotion of human rights of persons with albinism was launched last year and is currently jointly implemented by the International Organization for Migration (IOM) and other United Nations (UN) agencies, under the leadership of the United Nations Educational, Scientific and Cultural Organization (UNESCO).

The objective of the project is to reduce attacks, human rights violations, violence, and abduction of persons with albinism across the country and particularly in targeted provinces, such as Zambézia, Tete and Niassa Provinces.

The initiative focuses on the overall promotion and protection of human rights of people with albinism, as well as strengthening the legal and health components, ensuring that they have access to relevant services. The initiative also hopes to contribute to behaviour change among the population using several awareness-raising tools.

The intervention will include capacity-building activities for various stakeholders, such as government, civil society, police officers, community leaders, journalists, teachers, and midwives, to consolidate their knowledge about the nature, origins, and cause of albinism in order to combat and dispel myths.

Under this project, IOM will organize capacity-building activities for various stakeholders on child protection, counter-trafficking and irregular migration, as well as collect information on attacks, and provide comprehensive assistance to victims of trafficking or violence among people with albinism. 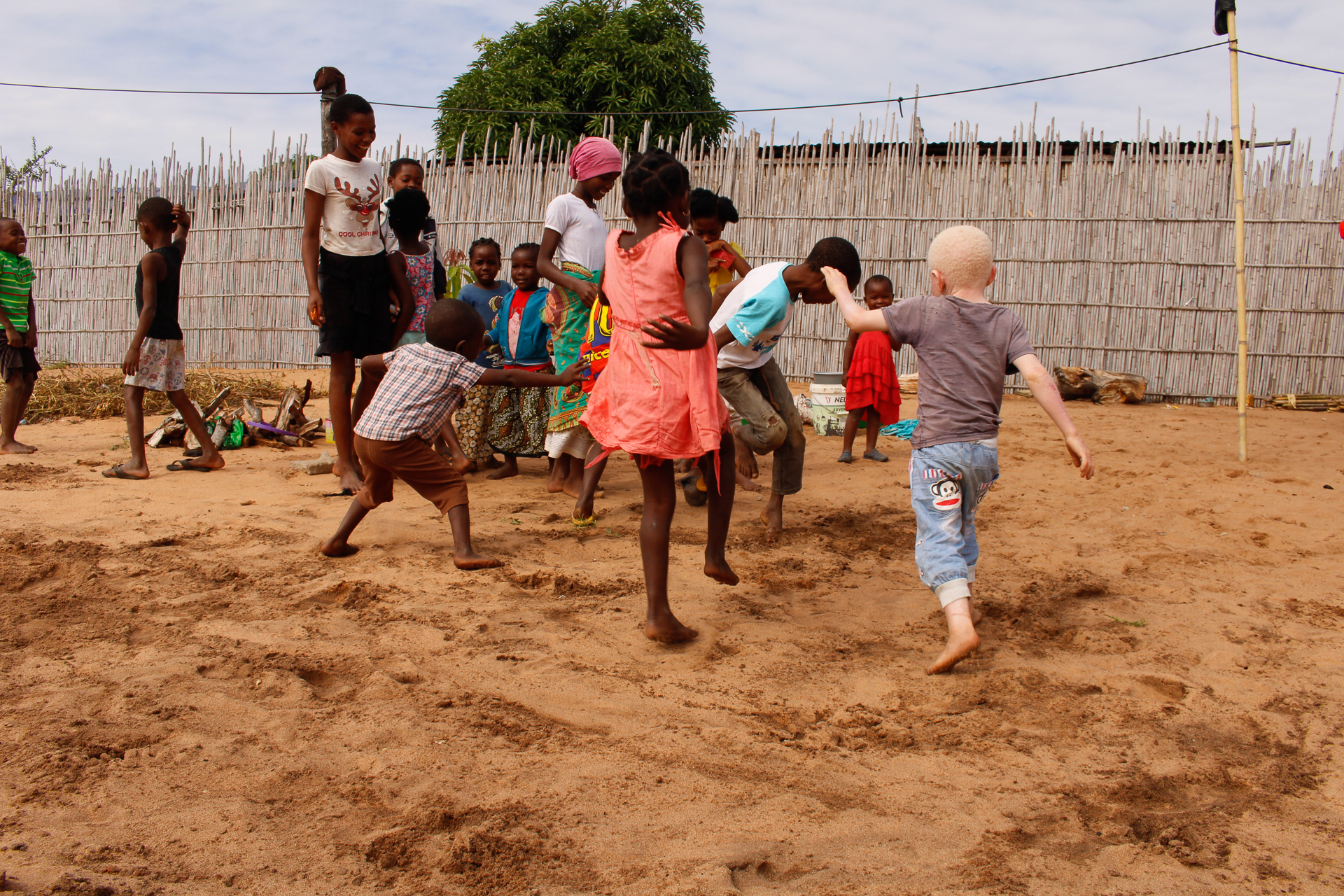 With support from his uncles and cousins, a safe haven and family structure was established throughout the years for Raimany. Two years ago, that sanctuary was put in jeopardy. The northern provinces’ prolonged conflict came knocking on Raimany’s door, causing him and his family to flee their home and abandon their belongings.

Northern Mozambique is facing an ongoing complex crisis marked by a dire humanitarian situation as well as extreme poverty. For over four years, the region has experienced attacks by Non-State Armed Groups (NSAG) allegedly affiliated with the Islamic State, resulting in large-scale displacements. According to IOM, close to 800,000 internally displaced persons (IDPs) are currently living in northern Mozambique (DTM, February 2022).

“After travelling aimlessly for 350 kilometres on foot, by car and bus, we finally managed to reach Pemba two years ago, convinced that it would be a more appropriate place for little Raimany to grow up, far from discrimination and with more accessible health services,” said Dinho, Raimany’s uncle. “Just when we thought we had put our misfortunes behind, Raimany’s father got sick and passed away last year. We were all devastated.”

As services have been largely disrupted in northern Mozambique since the onset of the crisis, IOM continues to address the humanitarian needs through the continued implementation and scaling up of its multi-sector humanitarian portfolio. IOM’s joint Protection and and Mental Health and Psychosocial Support (MHPSS) team referred Raimany to the district’s health services for appropriate treatment. In addition, Raimany and his family now receive psychosocial support to help raise awareness about albinism and appropriate care, as well as to prevent Raimany from being the target of discrimination. 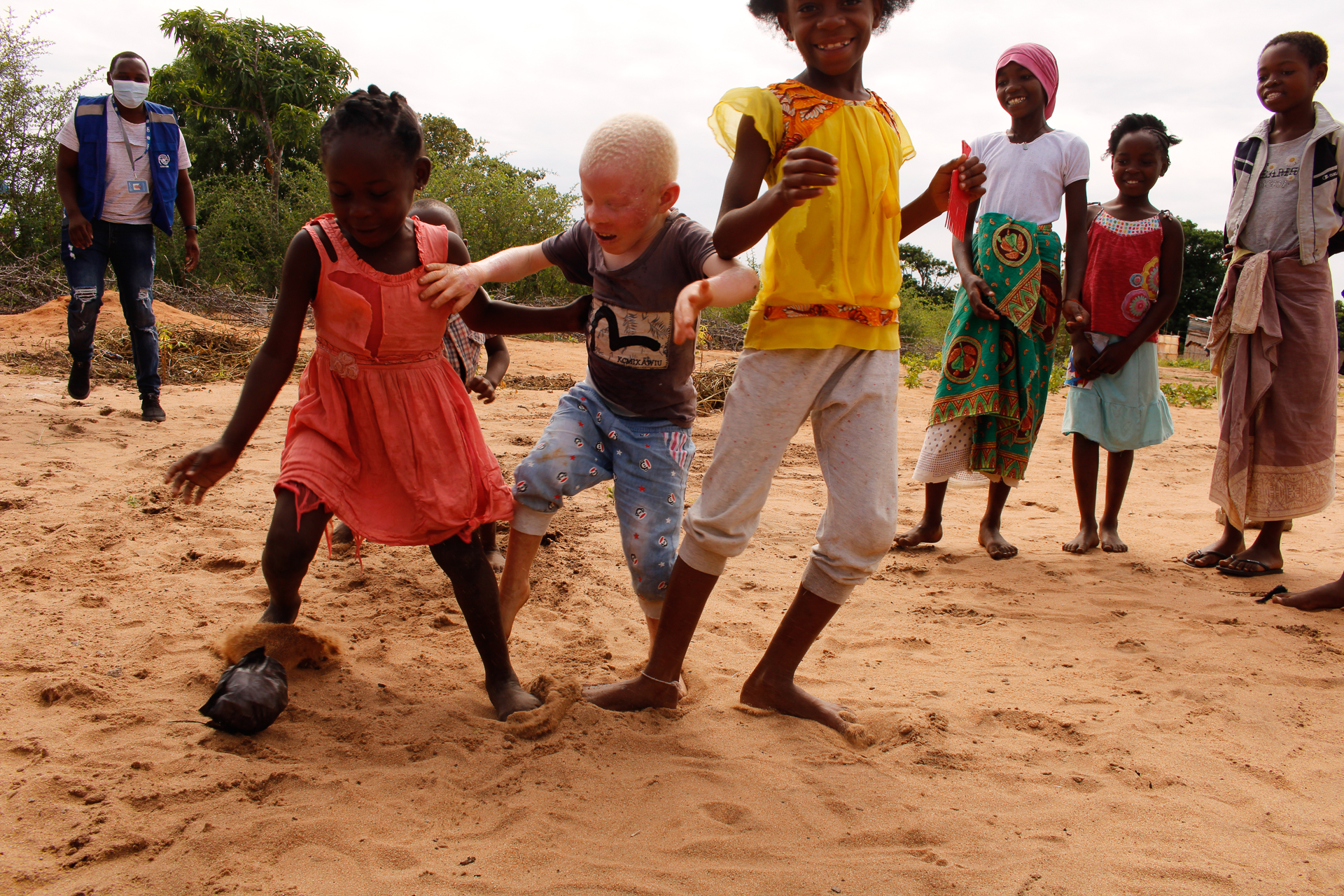 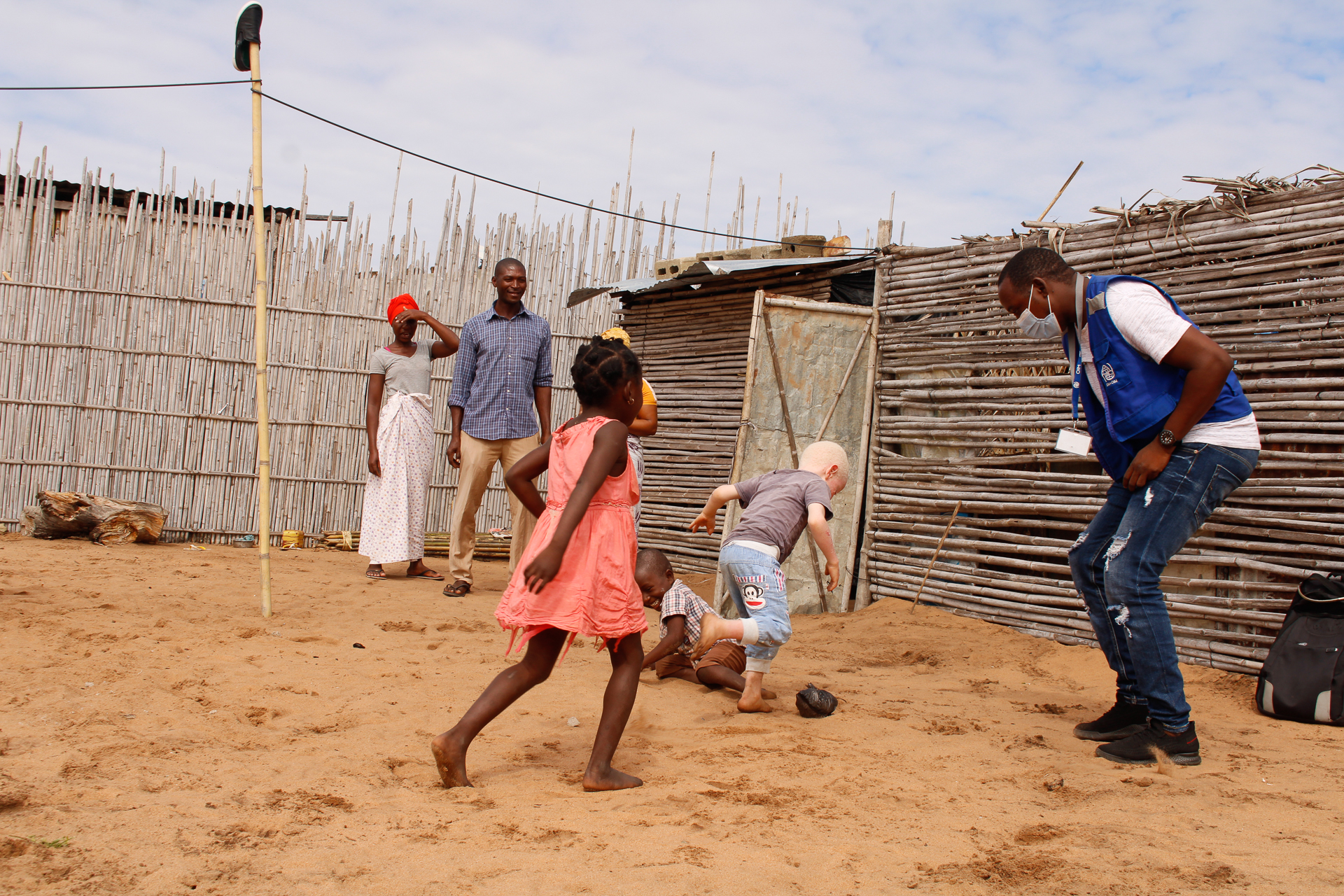 Through its integrated Protection-MHPSS programming, IOM ensures an inclusive and human rights-based approach to guarantee the availability and accessibility of MHPSS services for IDP and other affected communities.

Raimany and his cousin, Sufi, have a very close relationship. They are just like brothers and do everything together. They are not yet in school but hope to begin next year. Raimany is that excited about starting school that, when his older cousins come home from school, he listens attentively and reads their books while they do their homework, his uncle Dinho recounts.

“Since IOM’s team came into our life, the boy is receiving his treatment, which is drastically improving the condition of his skin, and his family is learning more about his needs. Raimany is happiest when they are here,” Dinho shares with emotion. 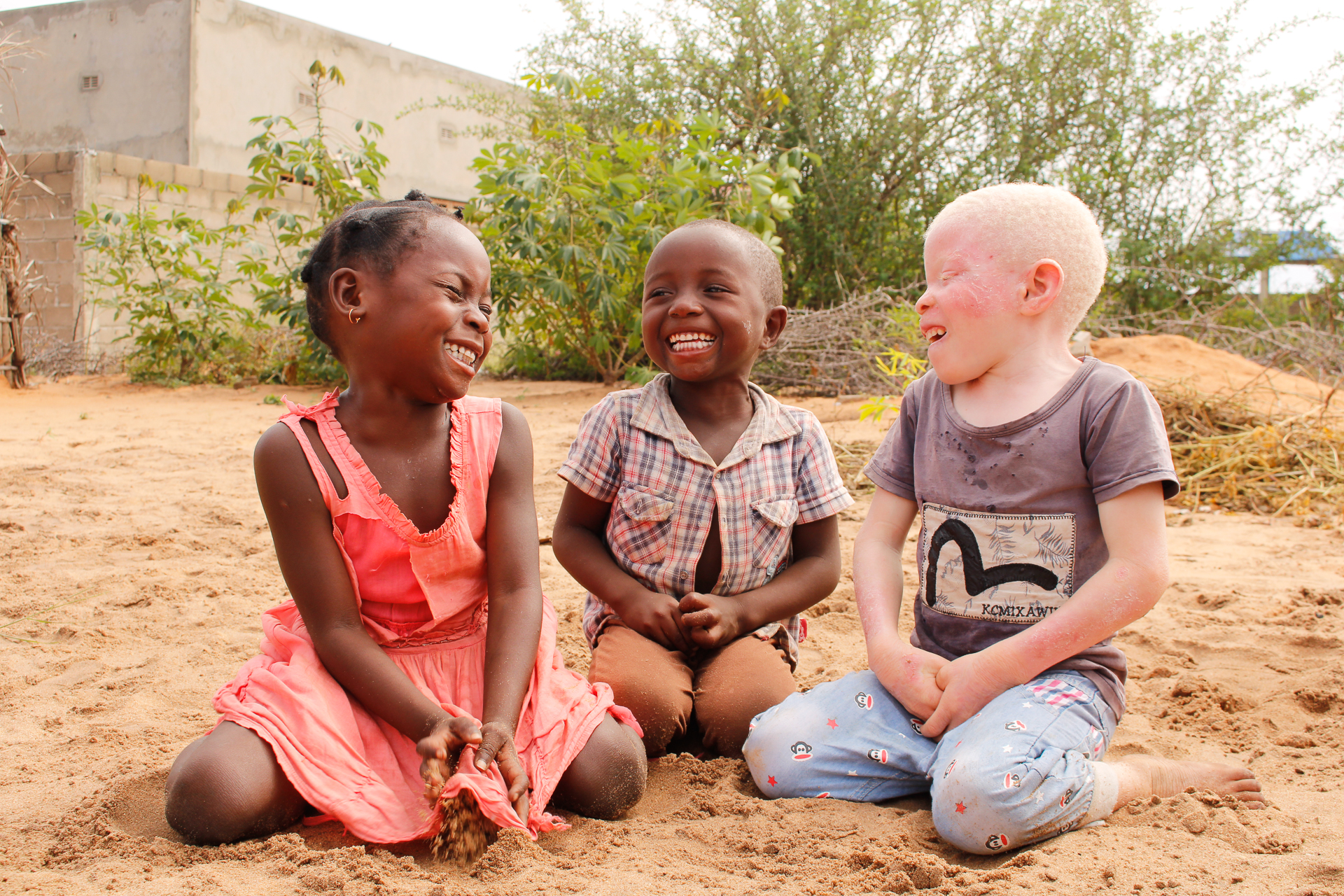 With no siblings and with them being the same age, Raimany and his cousins have become very close. Photo: IOM/María Toro

This story was written by María Toro and Manuel Mabuiangue, part of IOM’s Communications Team in Mozambique.