Amit, a displaced mother living in one of the sites in Shire, Tigray. Photo: IOM/Kaye Viray

Shire, Tigray – “I never thought I’d worry about water for my family until the conflict happened and displaced us,” says Amit, 38, a single mother of three. In the eight months since the conflict in Tigray, northern Ethiopia broke out, the number of displaced persons has ballooned to 1.99 million and now Amit  has joined them, living with her family in one of the sites for internally displaced persons (IDPs) in Shire, Central Tigray.

Access to basic services, especially water, sanitation, and hygiene (WASH) services, remains one of the key concerns in these sites.

“We walked for three days to get to Shire. Since arriving at the IDP site, access to water has been one of the many problems we think about each day,” Amit says.

She stays in an IDP site hosting thousands of people and recalls the challenges they faced with water rationing. “The lines were so long. Once I waited in line for hours, only to learn that the water delivered that day had run out. I went back to my children empty-handed.”

In response, IOM Ethiopia’s WASH teams took action in Tigray starting in February 2021. Daily water trucking – a short-term solution to deliver potable water to areas where there is insufficient supply – has reached an estimated 25,000 people since April, and continues. Each truck is tested at the source and at the point of delivery in collaboration with the local water office. IOM teams have also added 151 emergency latrines and 10 emergency showers in Shire IDP sites.

The water trucking service provides clean and safe water to the thousands of people living in this IDP site in Shire, Tigray. Photo: IOM/Kaye Viray

Each water truck is tested at the source and at the point of delivery in collaboration with the local water office. Photo: IOM/Kaye Viray

“Now, with the regular water delivery, we are able to get water whenever we need it,” Amit says. “This helps us a lot with cooking, drinking, cleaning and bathing. We also appreciate the latrines which are kept clean by hygiene promoters in the site. It is one less problem for us here.” 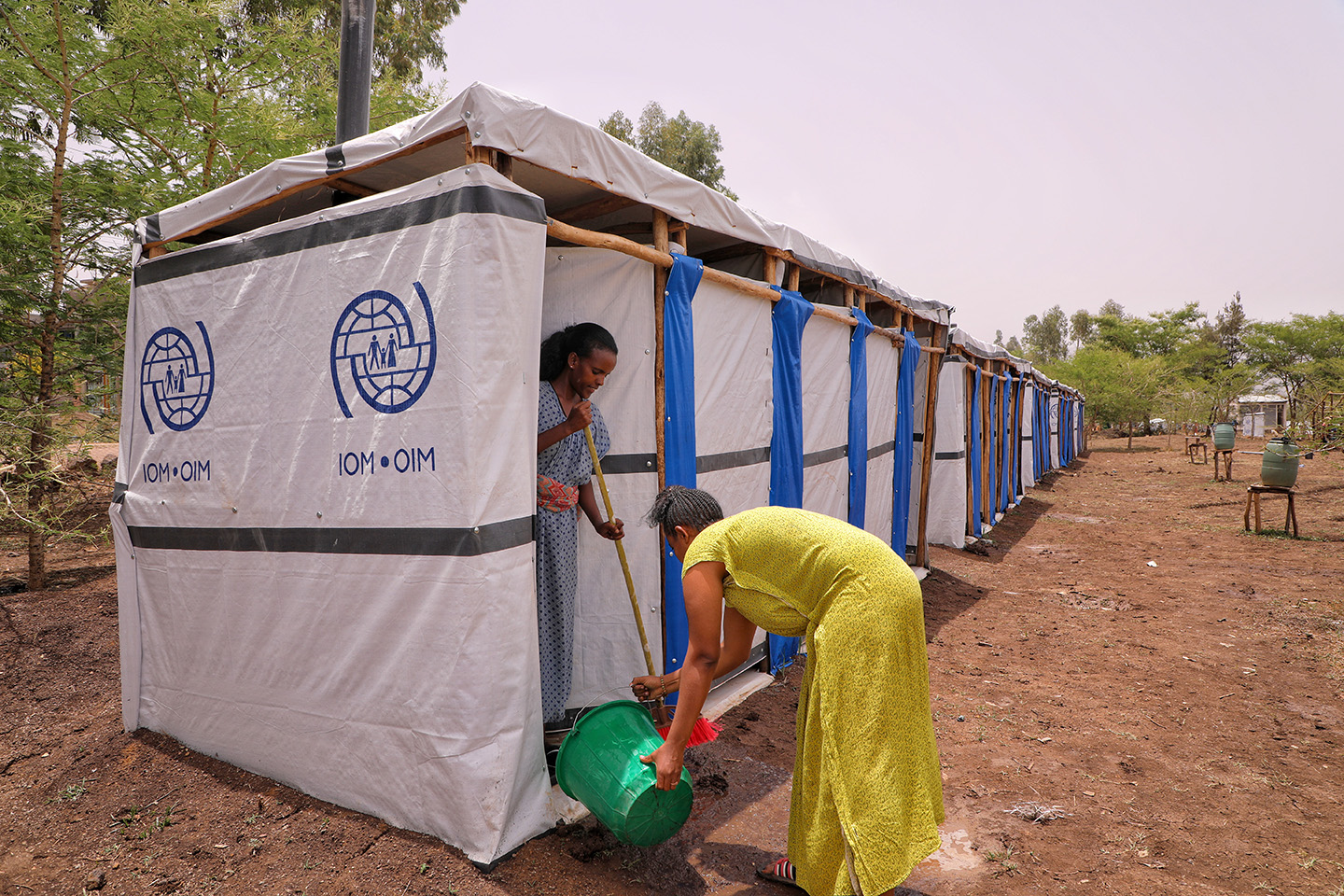 IOM trains IDPs to become hygiene promoters in the site. They are also responsible for keeping latrines and other WASH facilities clean. Photo: IOM/Kaye Viray

To further improve the living conditions in IDP sites, IOM has distributed 3,000 dignity kits – which consist of two pairs of underwear, washable sanitary pads, soap, a solar torch and a bucket – in Mekelle, Shire and Shiraro. Hygiene has also been promoted in Mekelle and Shire covering a total of 12 IDP sites,  including environmental cleaning campaigns and distribution of handwashing barrels and latrine cleaning materials to ensure a safe sanitary environment. 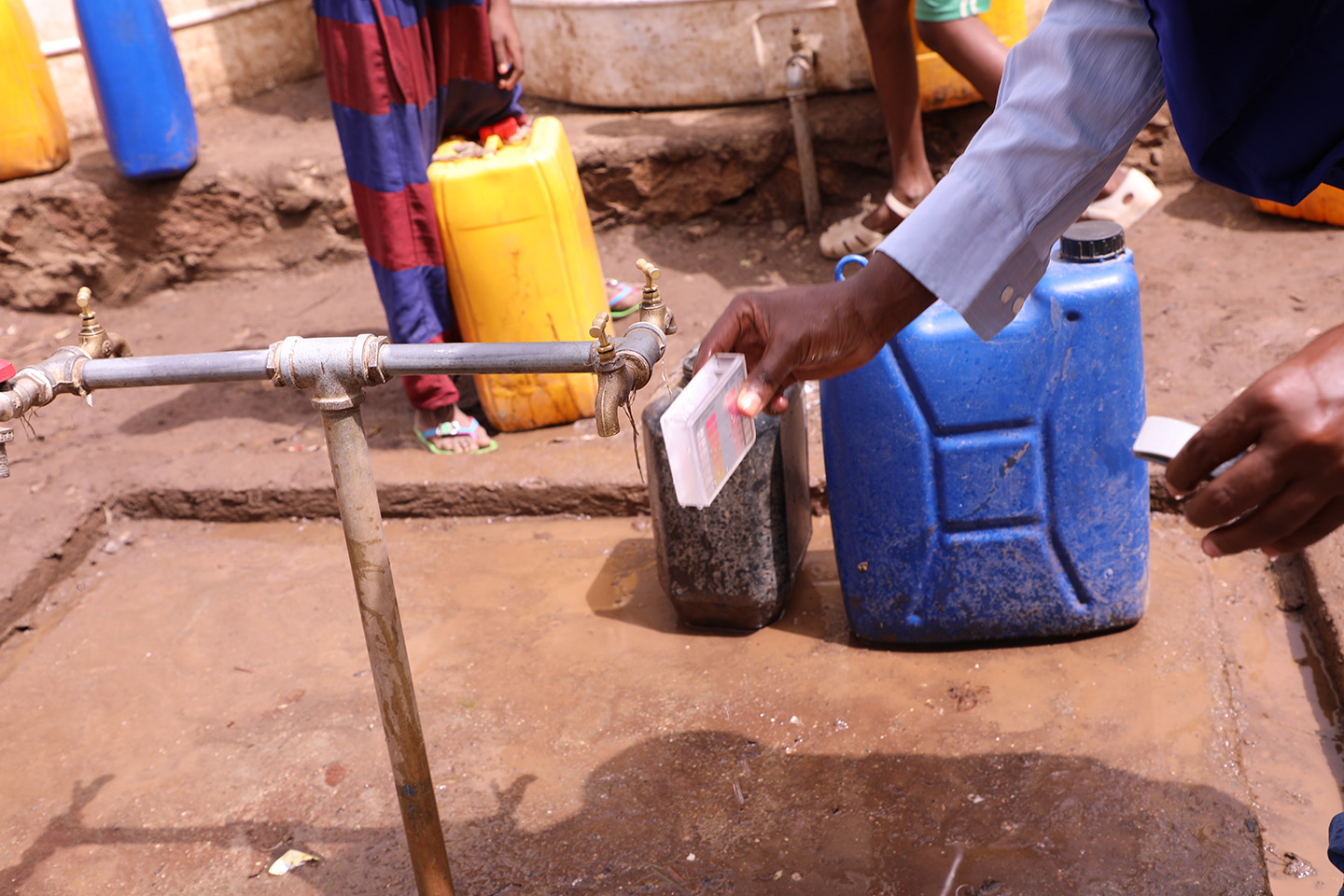 “IOM, together with our partners, will continue to support with emergency sanitation facilities and hygiene promotion, including the distribution of 20,000 bars of soap and 20,000 sachets of water treatment chemicals, water trucking for 25,000 people for three months, and the rehabilitation of six waterpoints in Tigray.

IOM’s WASH support in northern Ethiopia is made possible thanks to funding from the European Union Civil Protection and Humanitarian Aid, the Government of Germany and the Ethiopia Humanitarian Fund.