As Drought Ravages Somalia, Art-Based Interventions are Easing the Burden of Mental Health for the Displaced 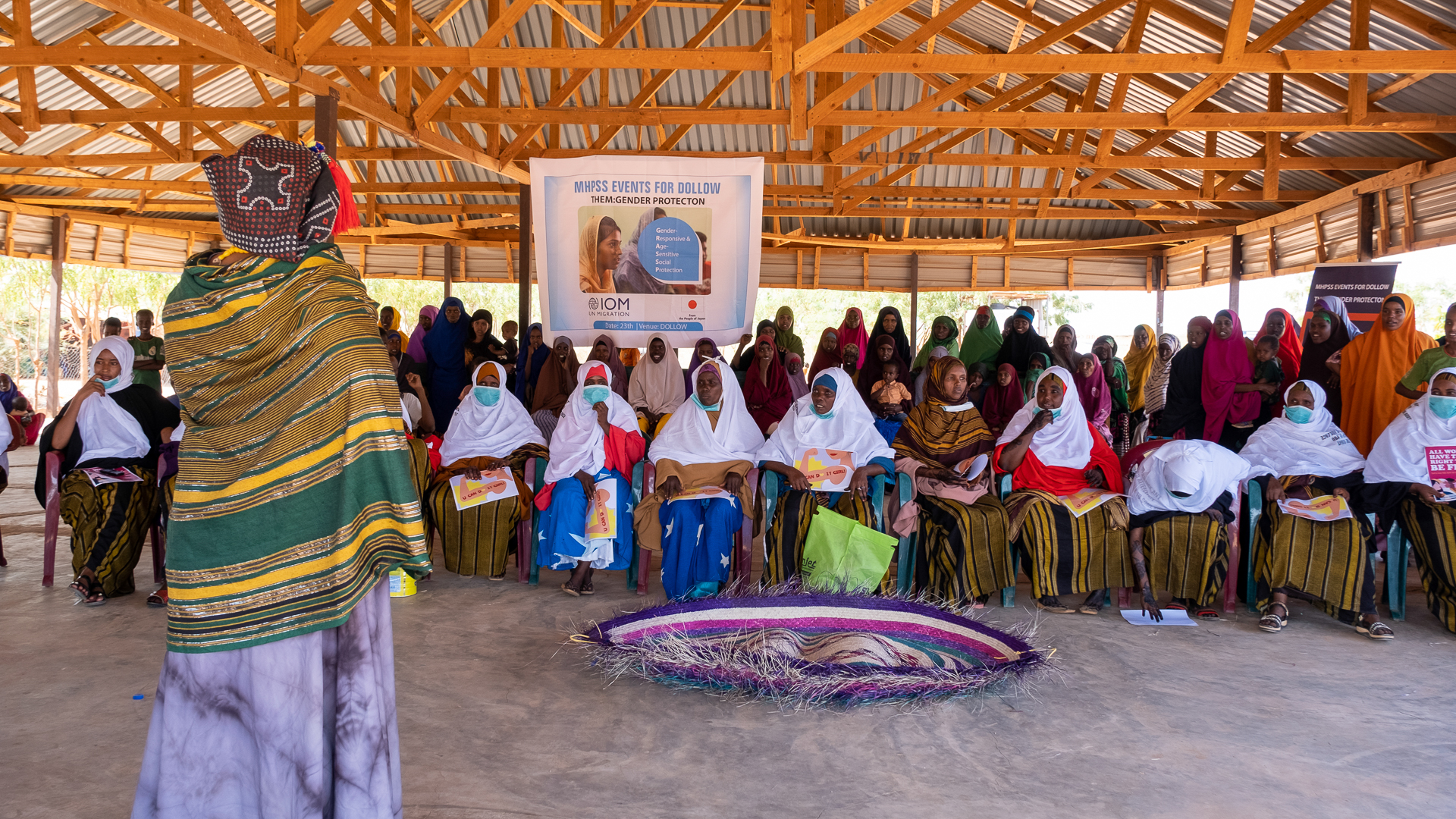 IOM organized a two-day storytelling workshop in the IDP site of Kabasa, Dollow, to promote the mental health of displaced women and men. Photo: IOM/Hajiidirir

Kabasa, Dollow, 30 May 2022 – Dressed in her best clothes, Adey, 30, arrived at the information centre determined to have a good day. The previous weeks have been difficult for the mother of nine, who, like thousands of others across Somalia, has been affected by the extreme drought hitting the country and much of the Horn of Africa.

“I had some goats that I was rearing for the last five years. There was nothing for them to eat and they died two months ago,” she said.

Adey was displaced back in 2017 due to drought. Since then, she has lived in Kabasa, one of two large displacement sites in Dollow, a Somali town on the border with Ethiopia that was hosting 98,000 Internally Displaced Persons (IDPs) by the end of February 2022.

Adey is one of the thousands of Somalis who have settled in this informal site since its creation in 2011 following an intense drought that killed 260,000 people and affected more than 13 million people across the Horn of Africa.

In Kabasa, IDPs can access life-saving support thanks to the dozens of aid agencies operating in the area. These services include safe water, health services and food assistance. But sometimes this is not enough to ensure the well-being of those displaced, who face challenges to integrate into their new lives.

“Women, men and children experience displacement in different ways. The hardships they go through can have long-term effects on their mental health,” says Rawan Hamid, the International Organization for Migration's (IOM) Mental Health and Psychosocial Support Specialist. “Unfortunately, access to adequate counselling and tailored treatment to heal their distress is still a challenge for these communities.” 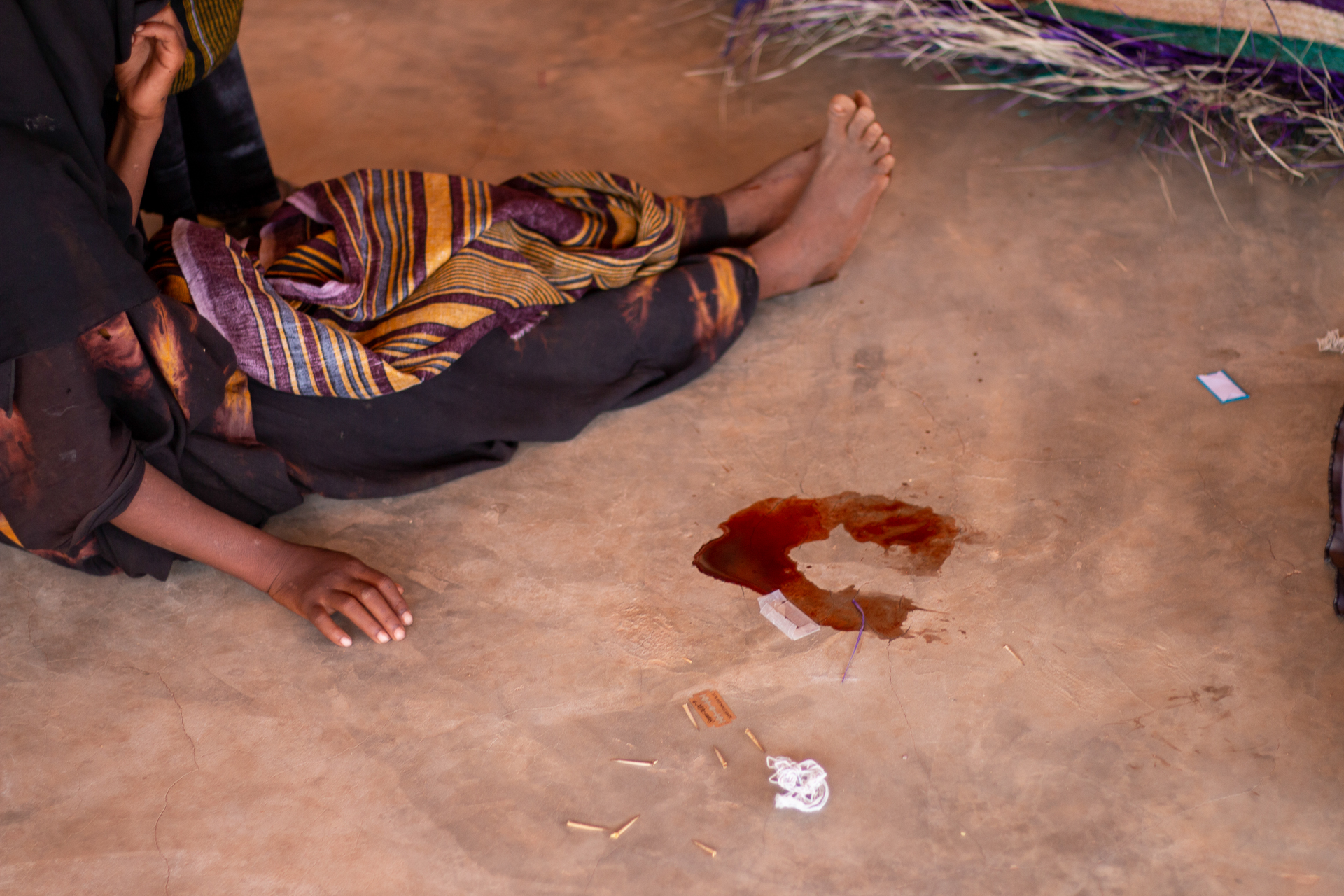 During the workshop, participants came together to perform theatre plays they had prepared on issues affecting them, such as Female Genital Mutilation and Gender-Based Violence. Photo: IOM/Hajiidirir

Being displaced can create substantial trauma. Overnight, displaced persons become dependent on humanitarian relief to survive. Their support networks and lifestyles change, disrupting their identities as they struggle to adapt to a new environment.

“These abrupt life changes increase their risk of developing mental health disorders,” said Rawan. “Many of these displaced persons were once herders who could provide for their families. Now they need to queue for hours to get the most basic things such as water.”

The prolonged conflict in Somalia and the worsening effects of climate change have uprooted about 2.9 million people from their homes across the country. Another 760,000 people have also been displaced since 2021 due to a devastating drought.

Most people move from rural to urban areas. Frequent and unpredictable extreme weather events such as drought and floods have made it impossible for communities to return to their nomadic lifestyle after displacement. Instead, precarious settlements in cities become their permanent homes where they need to adapt to a new routine and survive on daily wages.

The growing population in cities also adds more pressure to the already strained infrastructure and services, directly impacting the integration of IDPs in their host communities. 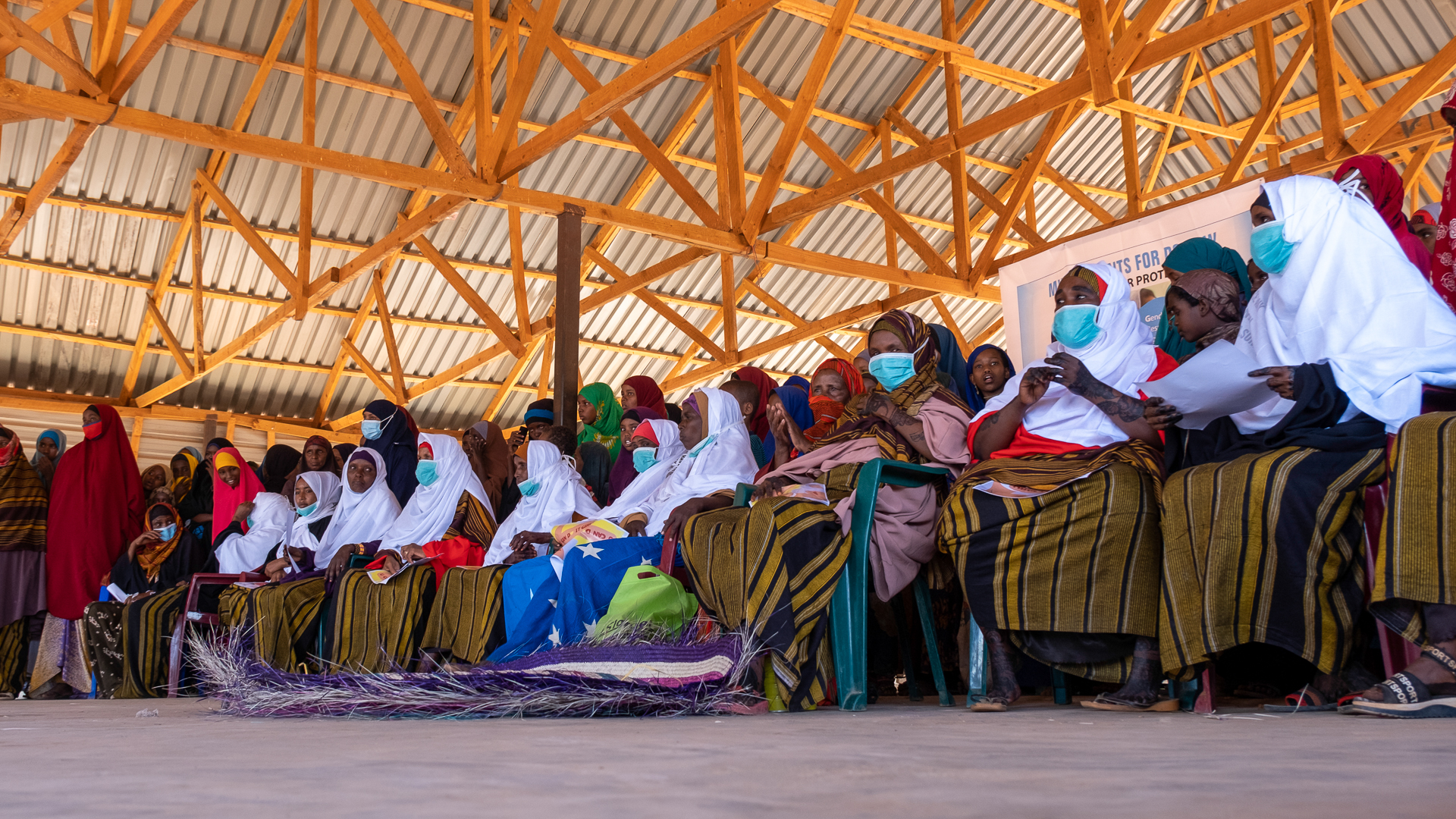 Over 50 participants, mostly women, attended the storytelling workshop that allowed them a space to share impressions, and find solutions to issues affecting their lives. Photo: IOM/Hajiidirir

“Marginalization of IDPs is a big issue in the country. Some people living in Kabasa have been there for years and have been unable to grow economically,” said Rawan.

The numbers of those who require humanitarian assistance is increasing. The latest Humanitarian Response Plan for Somalia estimates that there are some 7.7 million people in urgent need of shelter, food, water and health care – this is nearly half of Somalia's total population and 30 per cent higher when compared to 2021.

On top of their daily challenges, displaced persons and vulnerable communities also face disruptions in the continuity of care. For instance, in 2021, IOM had to close 26 health clinics across Somalia due to lack of funding, impacting nearly half a million displaced and vulnerable people who were left overnight without critical health services.

This uncertainty about what next month will bring can cause depression and anxiety among individuals. A lack of proper and long-term mechanisms in place to provide psychosocial support can increase the chances of developing mental disorders such as severe depression and Post Traumatic Disorder (PTSD).

Women and girls are particularly affected. They usually bear the burden of housework and are denied access to leadership opportunities. 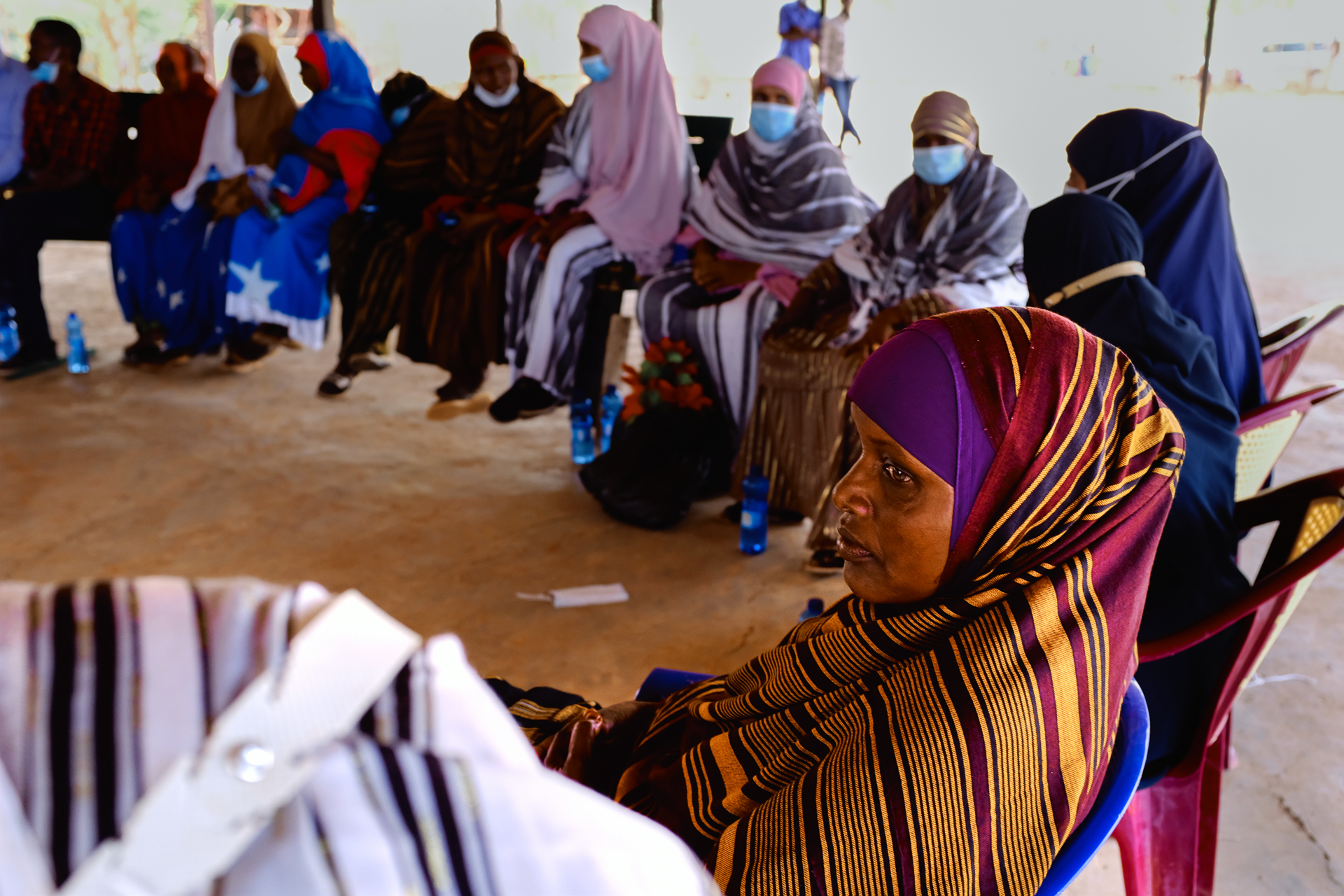 Displaced women and girls in Somalia are particularly vulnerable to Gender-Based Violence (GBV) and often don't have safe spaces to speak up about these issues, which affects their mental health and well-being. Photo: IOM/Claudia Rosel

Artistic and cultural expressions are embedded in the Somali social fabric and are part of national collective identity. Historically, Somalis have used poems, songs and dances not only for entertainment, but also to make sense of their reality, express worries, denounce social issues and to pass local wisdom throughout generations.

Last February, IOM organized a storytelling workshop with women and men in Kabasa to promote their well-being and allow them a safe space to speak up about their rights and issues that affect their lives, such as domestic violence and marginalization.

“The workshop was different from previous ones. We all stood up, played, and walked together. We were so happy, like children. We really enjoyed this workshop,” said Asli Abdikadir, the Chairperson of the Kabasa Women Association.

The workshop aimed to create a sense of togetherness by enabling the participants to discuss challenges they face in their community and reimagine new solutions through play and improvised theatrical scenes.

“We introduced culturally familiar and appropriate storytelling and performative elements to create a safe space for the participants to explore their current sense of identity on an individual as well as collective level,” said Sonya Armaghanyan, IOM's Community Engagement Specialist and designer of the workshop. “The notion of identity can be disrupted due to displacement and regaining a sense of one’s own identity is essential for an individual’s psychosocial well-being.” 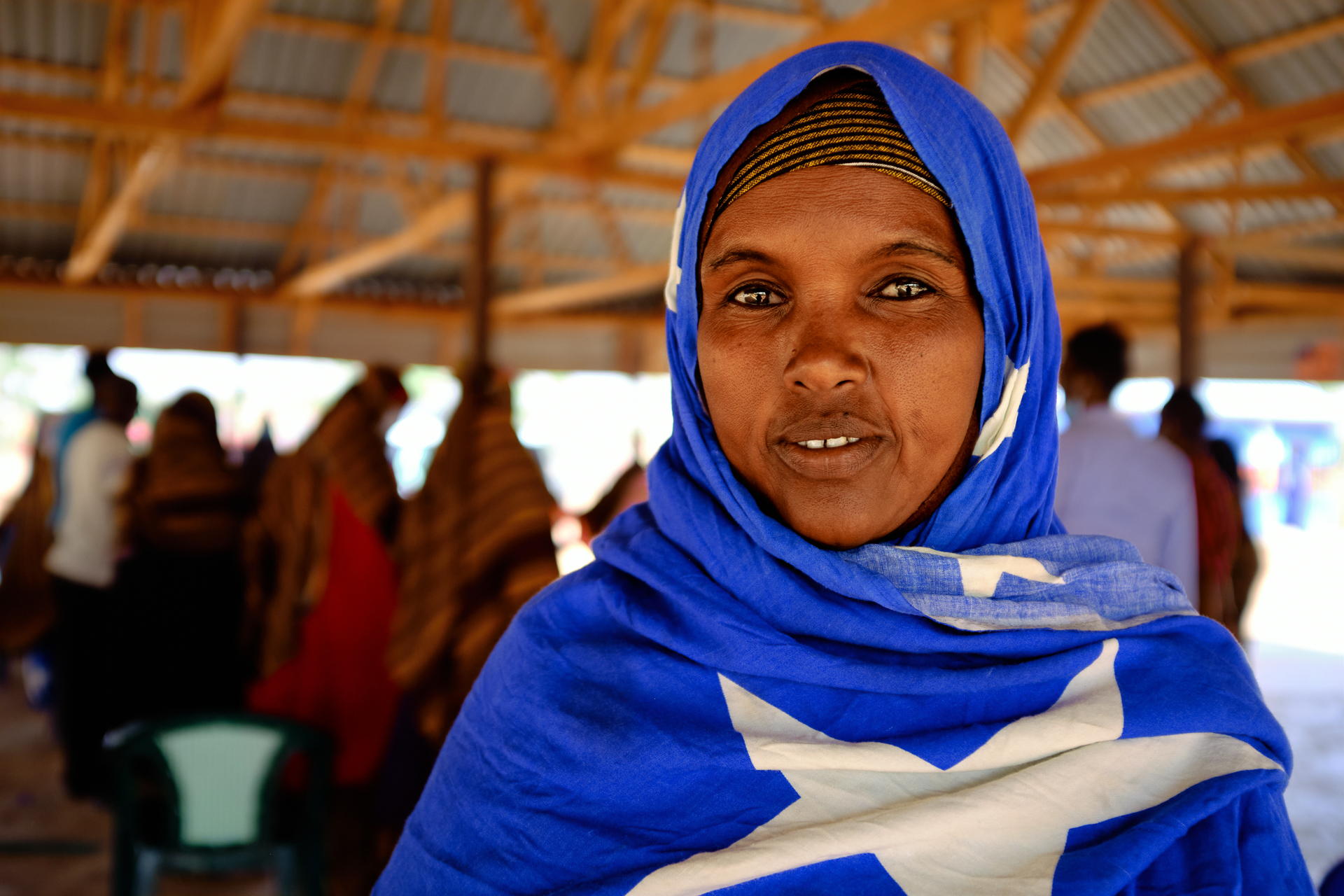 A displaced woman who participated in the storytelling workshop. Photo: IOM/Claudia Rosel

Individuals affected by displacement can lose their connection with their own socio-cultural practices and traditional rituals due to lack of opportunities to continue practicing them safely.

“The first drama was an awareness-raising, and it was about a girl who was raped. Rape happens in the camp a lot,” said Amina, a woman from the community who enjoys acting in her free time.

Violence against women and girl continues to be prevalent in the Somali society. A report published by UNFPA in 2021 noted that 75 per cent of the cases of Gender-Based Violence (GBV) reported in Somalia happen in displacement sites. Moreover, sexual violence against men and boys also exists.

“The second drama was about ending Female Genital Mutilation (FGM), as there are many young girls who are secretly being cut in the camp every day,” said Amina.

Early marriage and FGM are normalized and there are no social consensus or laws to prevent these practices from happening.

“There is a lot of bleeding in girls during childbirth and when they marry a man. The purpose of the song is to protect young girls from all those problems,” said Hodan, a singer living in Kabasa.

The workshop also provided a needed space for men and women to discuss community concerns and highlight the significant role they play in fighting GBV and FGM and creating a safer place in the community.

“A lot of people have been brought together to participate in the workshop. Different traditional dances have been performed. Each person in the camp knows a special dance, but playing together as a group was new to us,” said Mohamed, a male participant living in Kabasa.

The activity was also a chance to involve men in the discussion and send a message of shared responsibility towards building a stronger community that ensures the safety and well-being of everyone.

The art-based workshop was made possible thanks to generous funding from the Government of Japan.