Hiding from the Sun, the Stares and the Killers

Sitting on the bed in the room he shares with his mother and younger sister, Nsikelelo Mamba, 16, has to squint to be better able to watch a programme on the television less than a metre in front of him. His sister, Samkelisiwe, 12, doesn’t have to squint quite as much, but her eyesight isn’t perfect either.
Over the past few months, the siblings have been spending most days watching educational television and listening to educational radio programmes in an attempt to keep up their schooling.

Since joining their mother in Nkomazi, in northeastern Mpumalanga, Nsikelelo and Samkelisiwe have not been able to go to school. The COVID-19 lockdown has made it near impossible for their mother to find them a place in a school in the area. 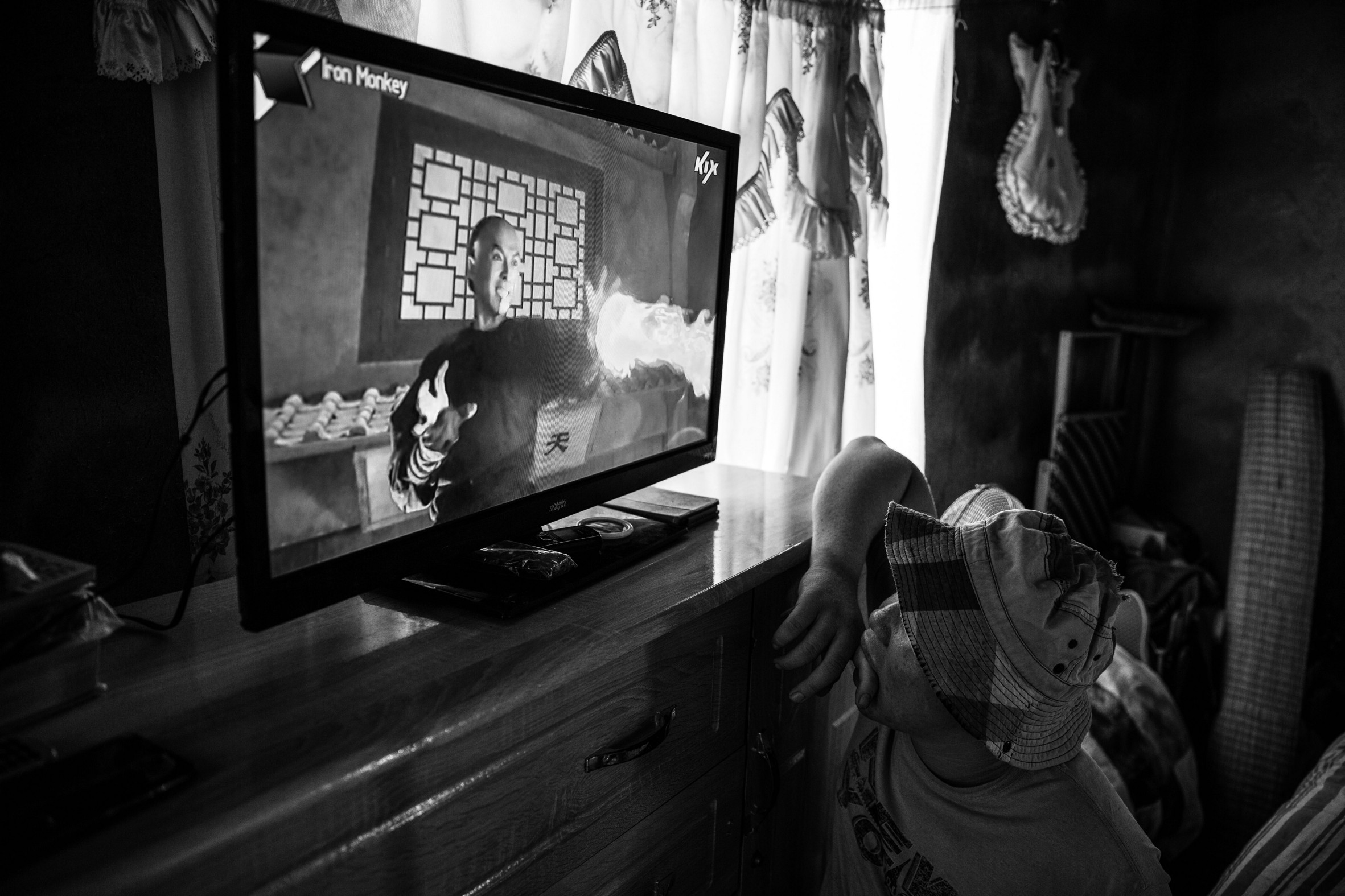 Instead, the children mostly spend their time in the small room the three of them rent, hoping the educational programmes will ensure they don’t fall too far behind in their schoolwork. Nsikelelo was frustrated by their ongoing lack of school attendance. “I miss school. I really like mathematics.” He hopes to become a doctor or a mathematics teacher one day.

Their mother, Enough Sihlongonyane, has been living in South Africa since 2014, after she left her family and the father of her children behind in eSwatini to move abroad for “a better life”.

“I didn’t want to stay with my parents. I wanted to stand on my own feet.” 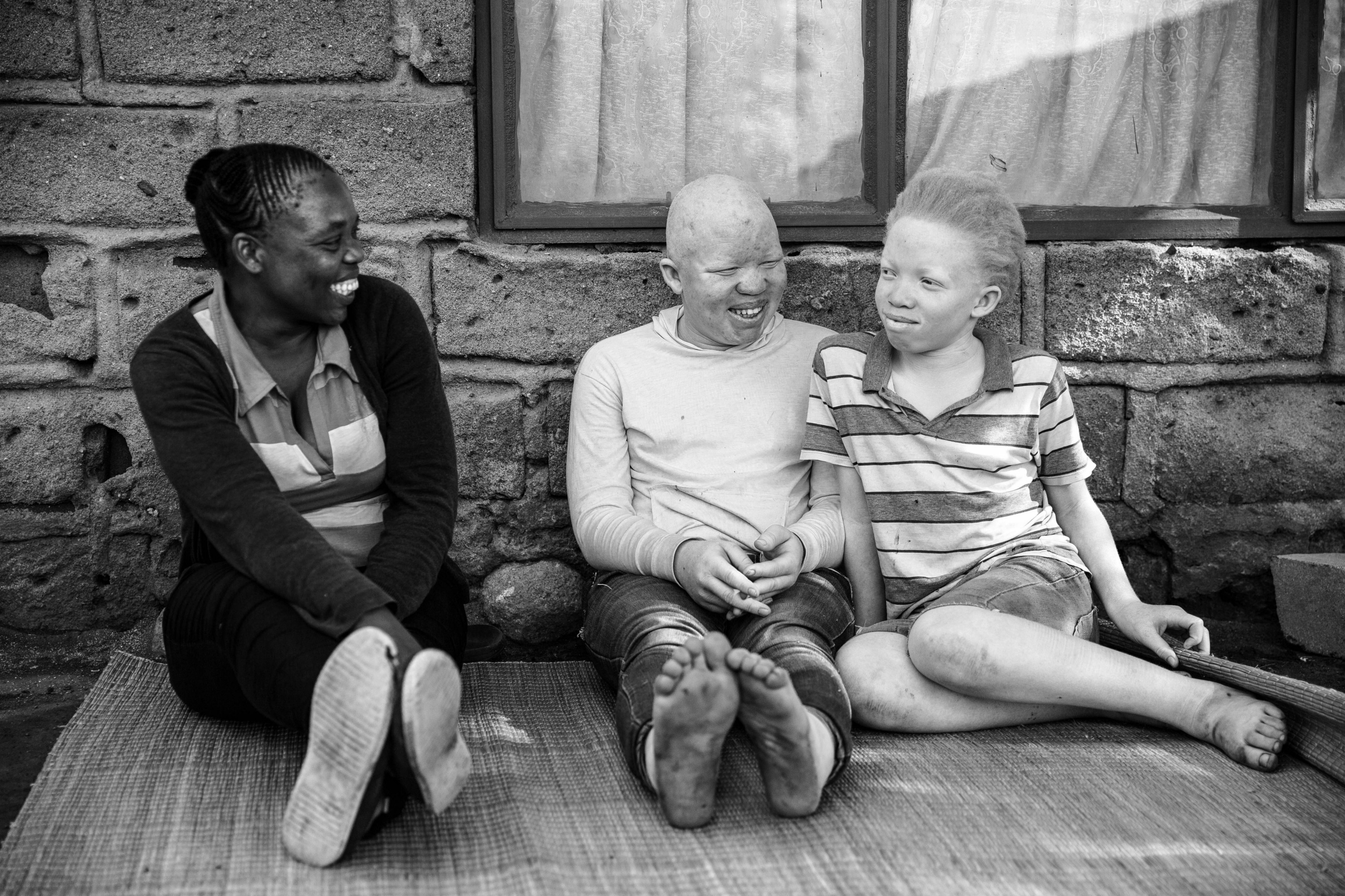 Sihlongonyane has not been able to find full-time work in Nkomazi. Instead, she does piece jobs, like washing a neighbour’s clothes or cleaning for other people in the area. While the rent for the room is ZAR 350 (USD 23) per month, she said she made around ZAR 50 (USD 3.30) per day if she did cleaning work for people in the area.

Nsikelelo and Samkelisiwe initially stayed behind in eSwatini while their mother was trying to find her feet in a new country. She always planned on having the children join her, but with the arrival of the coronavirus pandemic, they joined her sooner than she had planned. 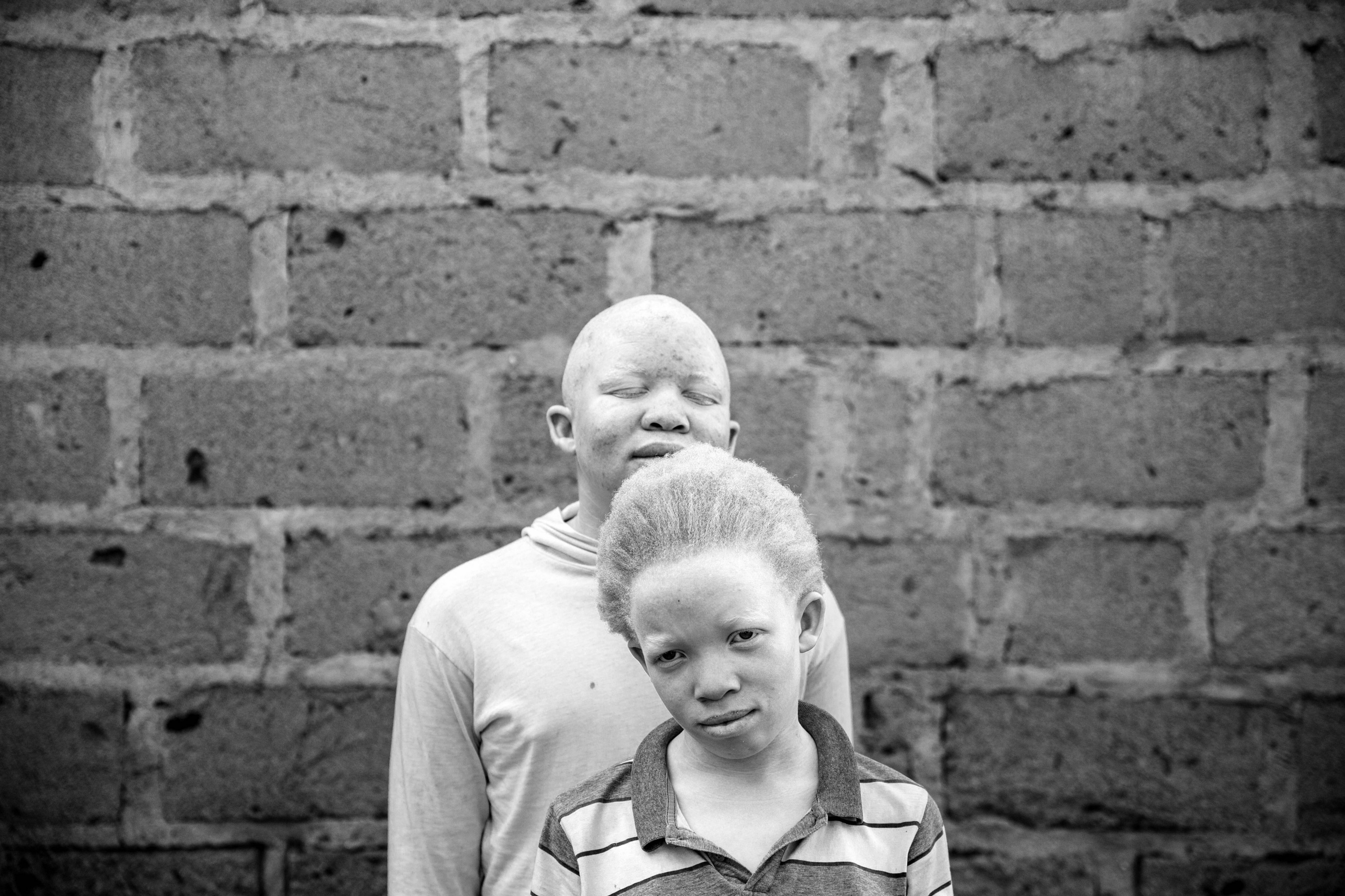 Albinism, a congenital condition characterized by the complete or partial absence of pigment in the skin, hair and eyes, often leads to a number of visual impairments such as photophobia (light sensitivity), nystagmus (involuntary eye movement) and amblyopia (a vision development disorder in which an eye fails to achieve normal visual acuity). 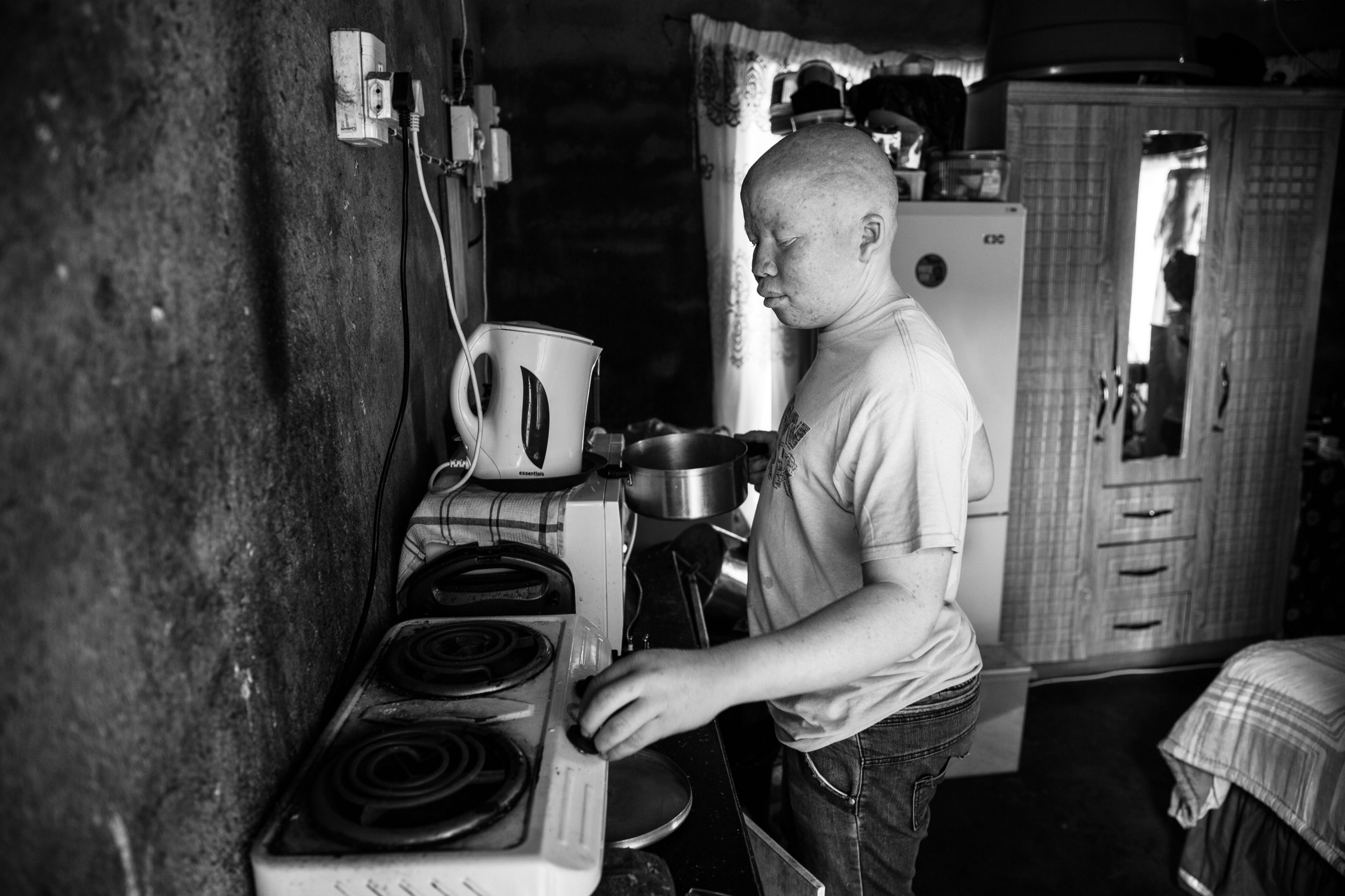 In South Africa, people with albinism are among the country’s most marginalized and vulnerable citizens, yet very little attention is paid to protect them from human rights abuses. Until recently, albinism has not been seen as a disability, but calls from the albinism community are growing for it to be classified as such. 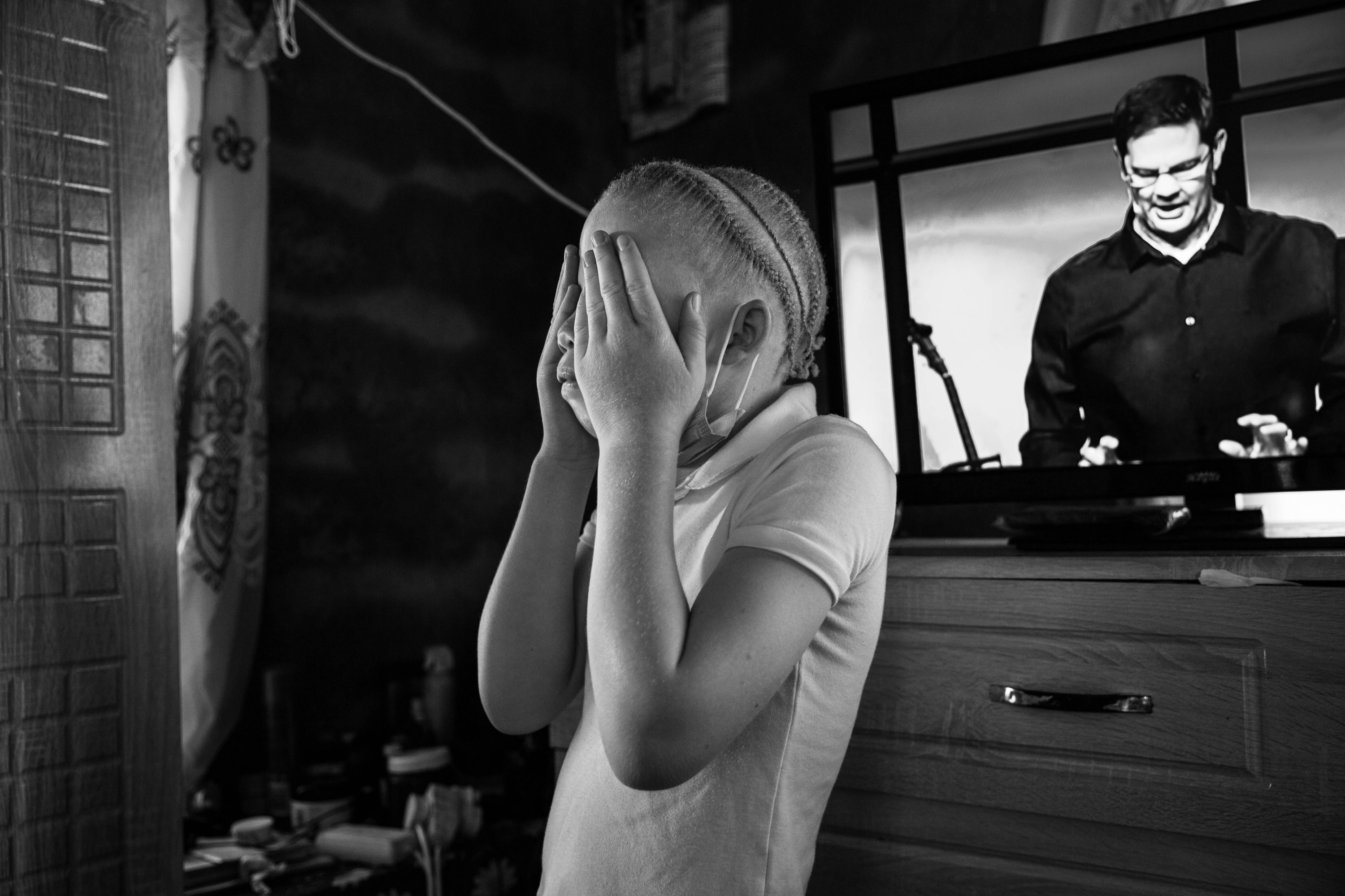 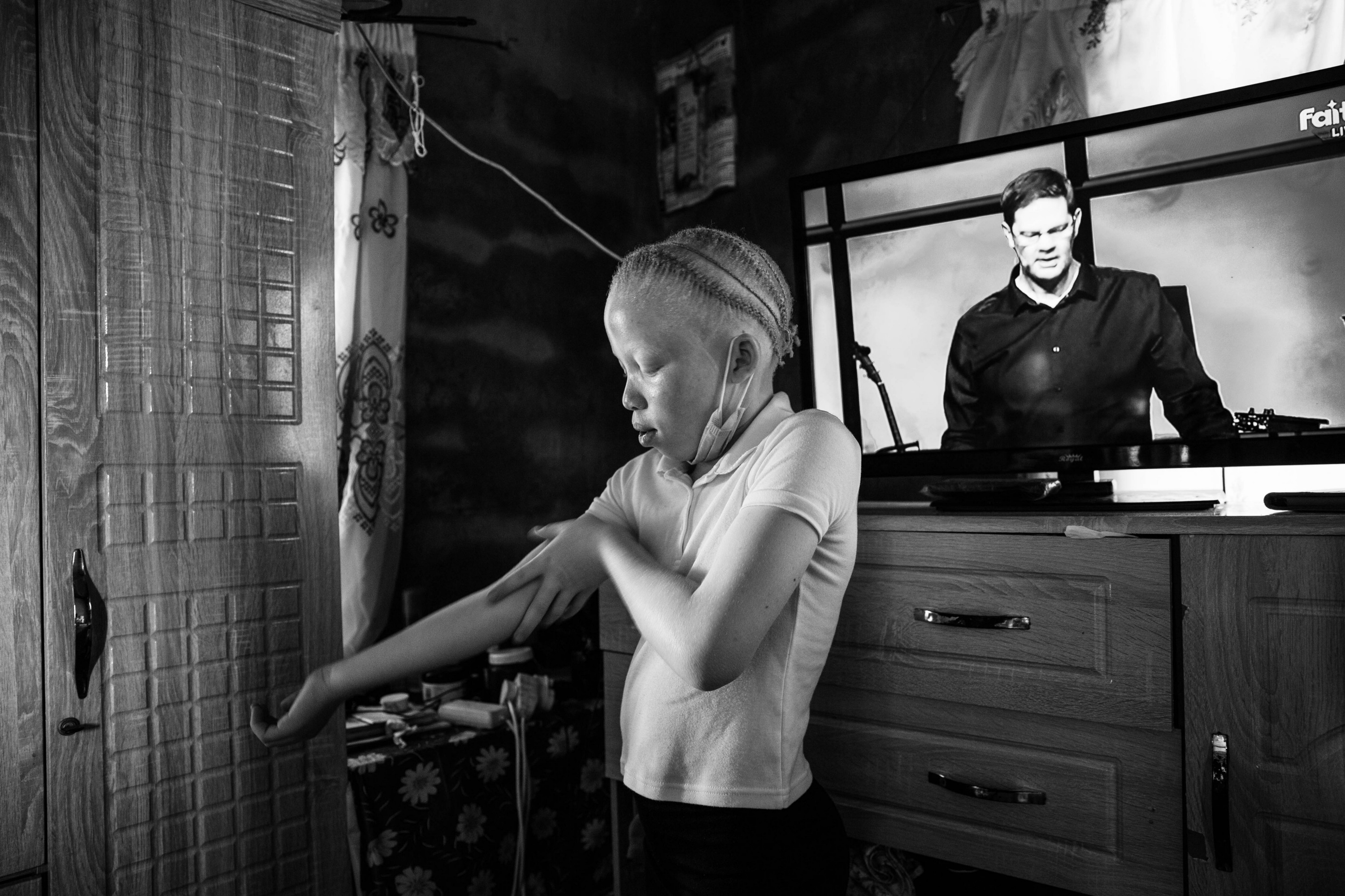 Samkelisiwe applies sunblock before going out.

Nomasonto Mazibuko, founder and national director of the Albinism Society of South Africa, who herself lives with albinism, said the UN’s Office of the United Nations High Commissioner for Human Rights had taken steps to provide better support to people living with albinism. This included some European countries regarding people with albinism as legally blind, which gave them the same rights as other people with disabilities.

“It is not a one-size fits all because our ability in vision is not the same. So you will find some who will say ‘no, we are not disabled’ but we cannot sit in the sun, we cannot work in the field, and it is especially difficult in the rural areas near the borders,” she said.

Oupa Zitha, chairperson of the Ehlanzeni Disability Forum, who knows Sihlongonyane and her children very well, said the forum regarded people with albinism as disabled because of the visual impairments and skin conditions that often accompany it. 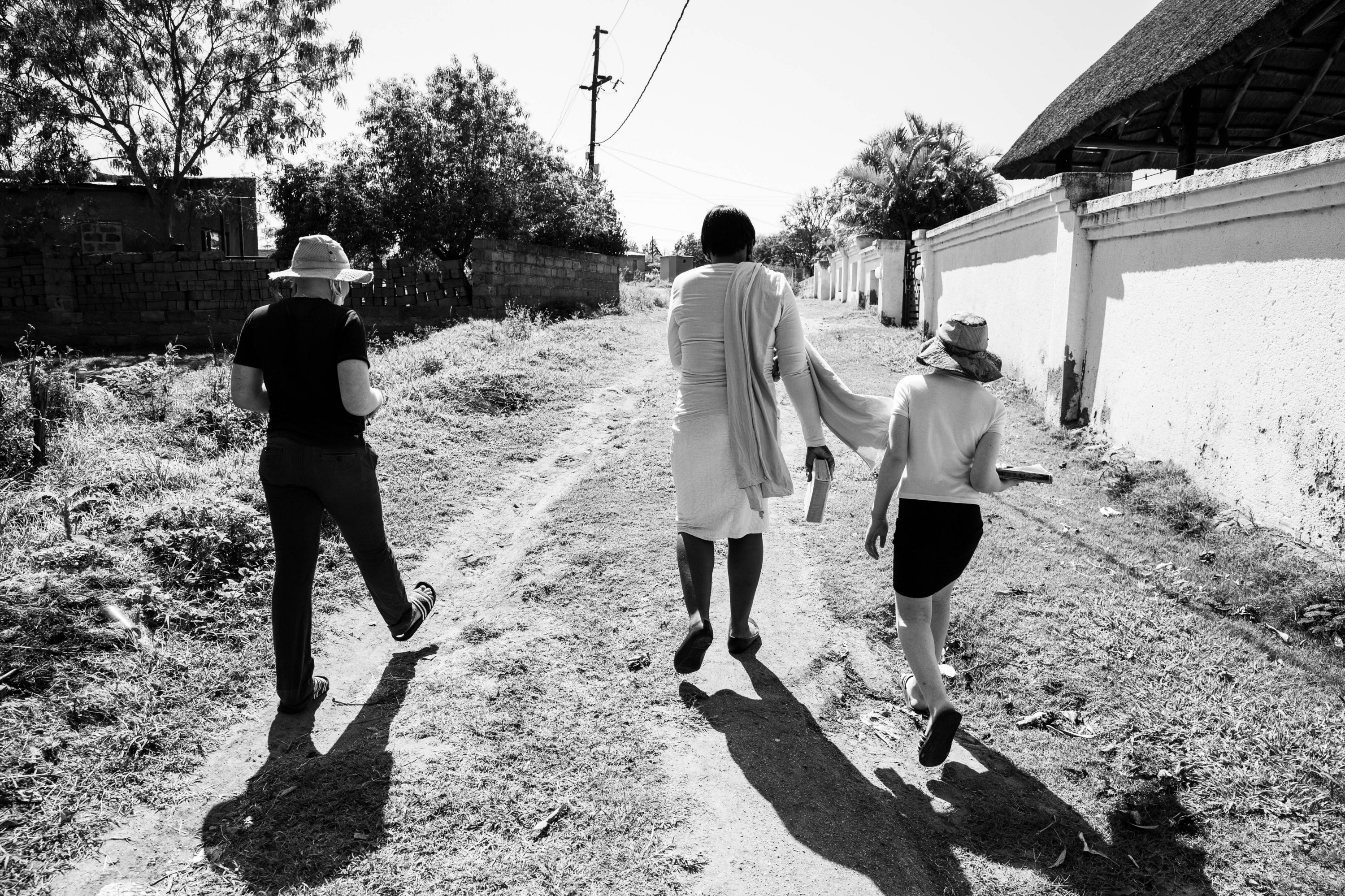 The family walking to church.

In addition, stigma in the community and the prying eyes of others often bothered her more than anything else.

"To me, it’s a bad thing,” Sihlongonyane said. “But I am here in South Africa, so I can’t say anything. If I say do, they will say ‘It’s our country, we can say anything, you can’t judge us.’ 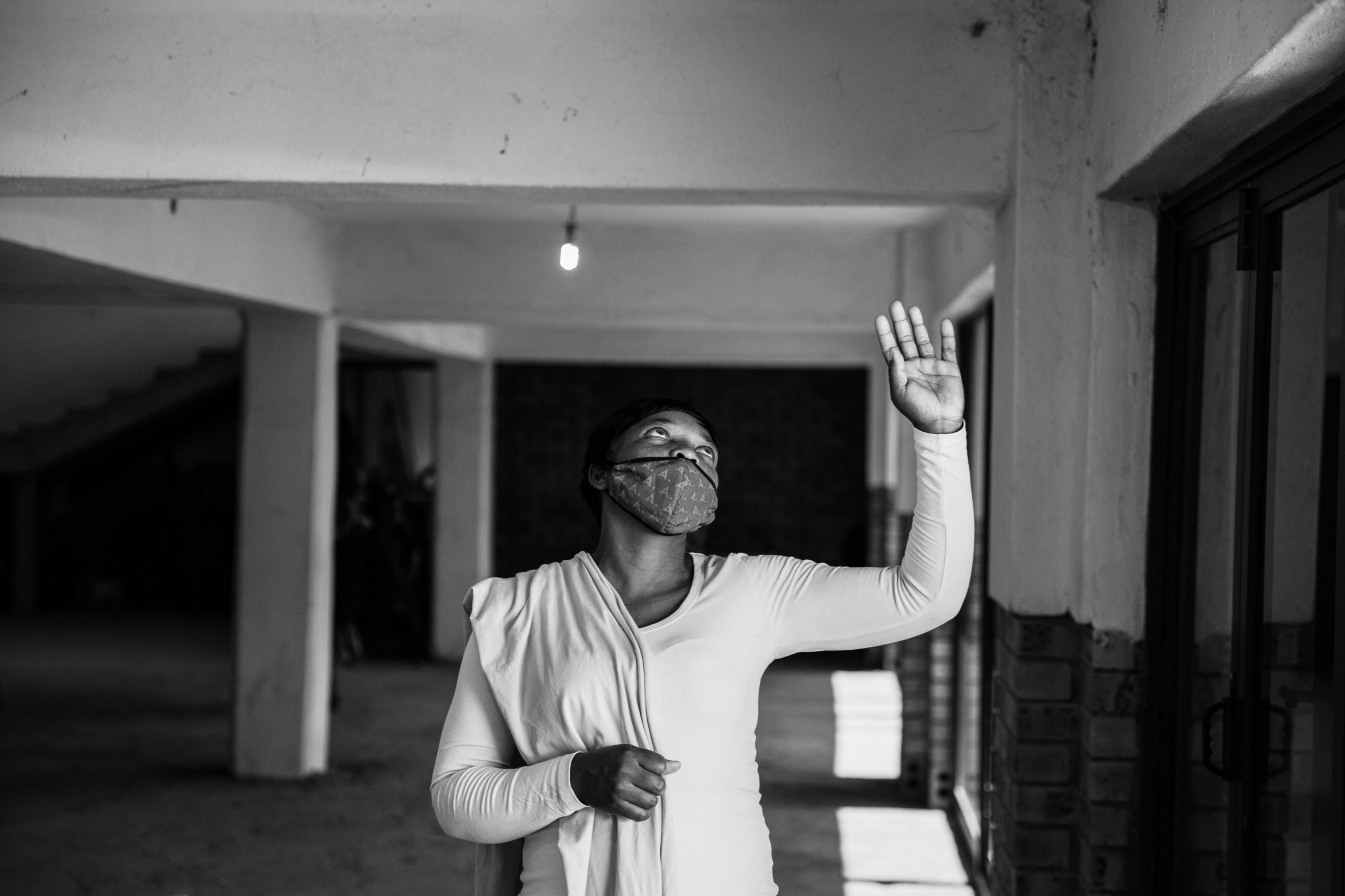 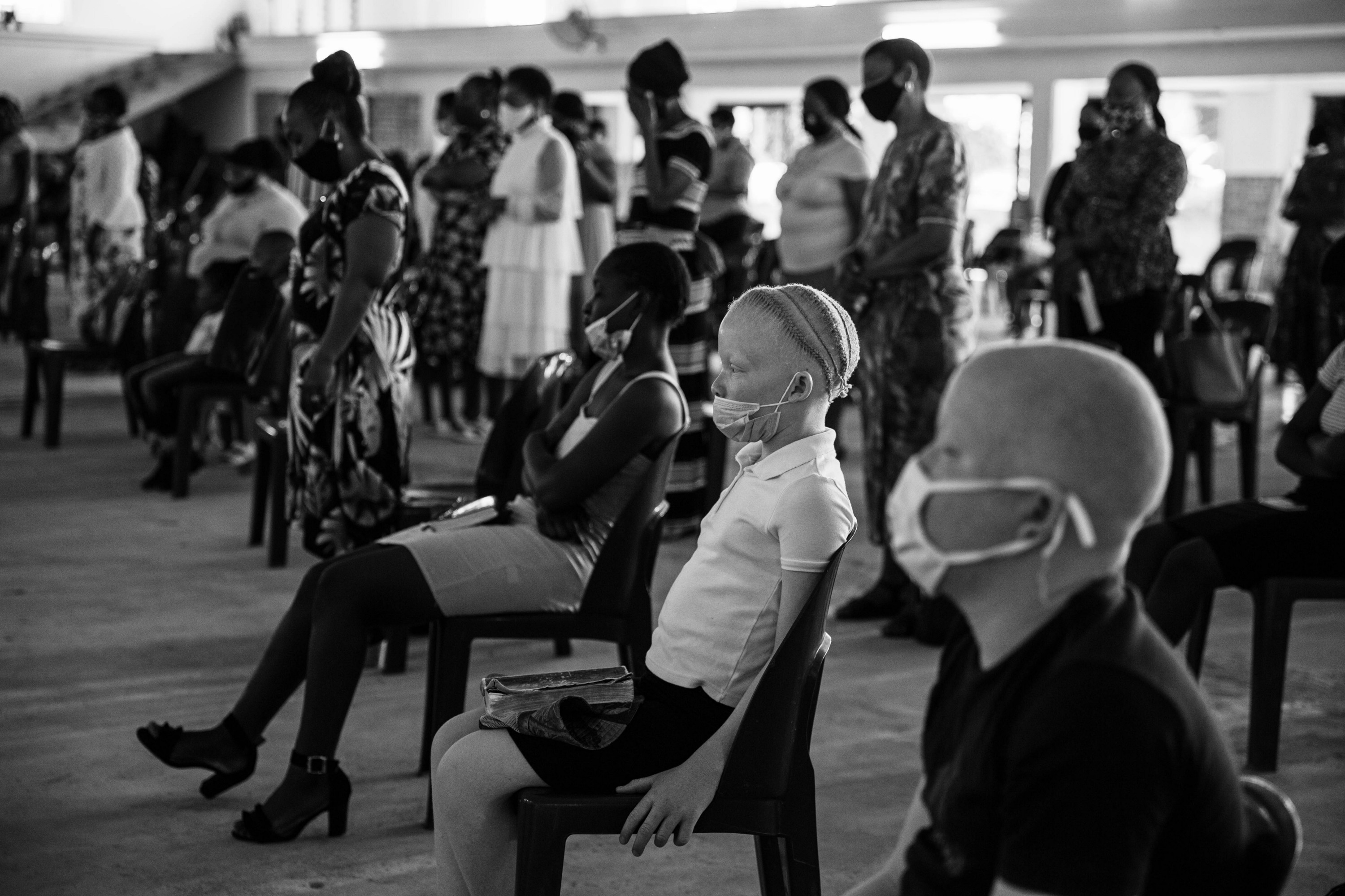 There have been reports in South Africa, and a number of other African countries, of people with albinism being murdered for their body parts, to be used in witchcraft rituals. In a 2016 report, Amnesty International found that these attacks on people with albinism are fuelled by stereotypical beliefs that their body parts bring wealth and good luck.

Mazibuko said it was a fear for any person living with albinism to be murdered for their body parts. “It is critical for us to demystify beliefs around albinism, and we cannot stop to educate, educate, educate.” 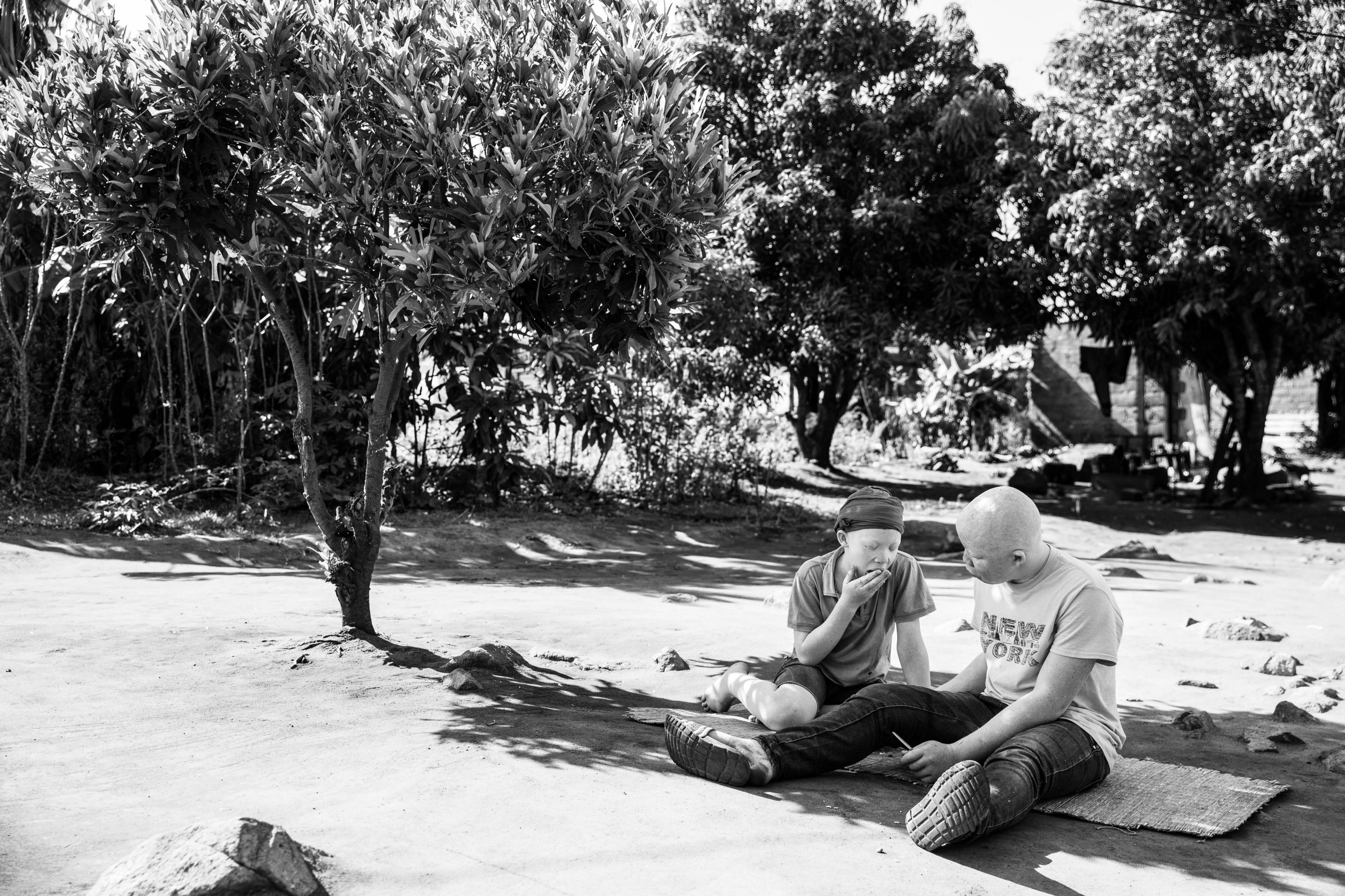 The siblings have a close relationship.

Sihlongonyane said the reports of these murders made her extra cautious with her children. “They are also scared, especially the older one. He is aware of what’s happening.” 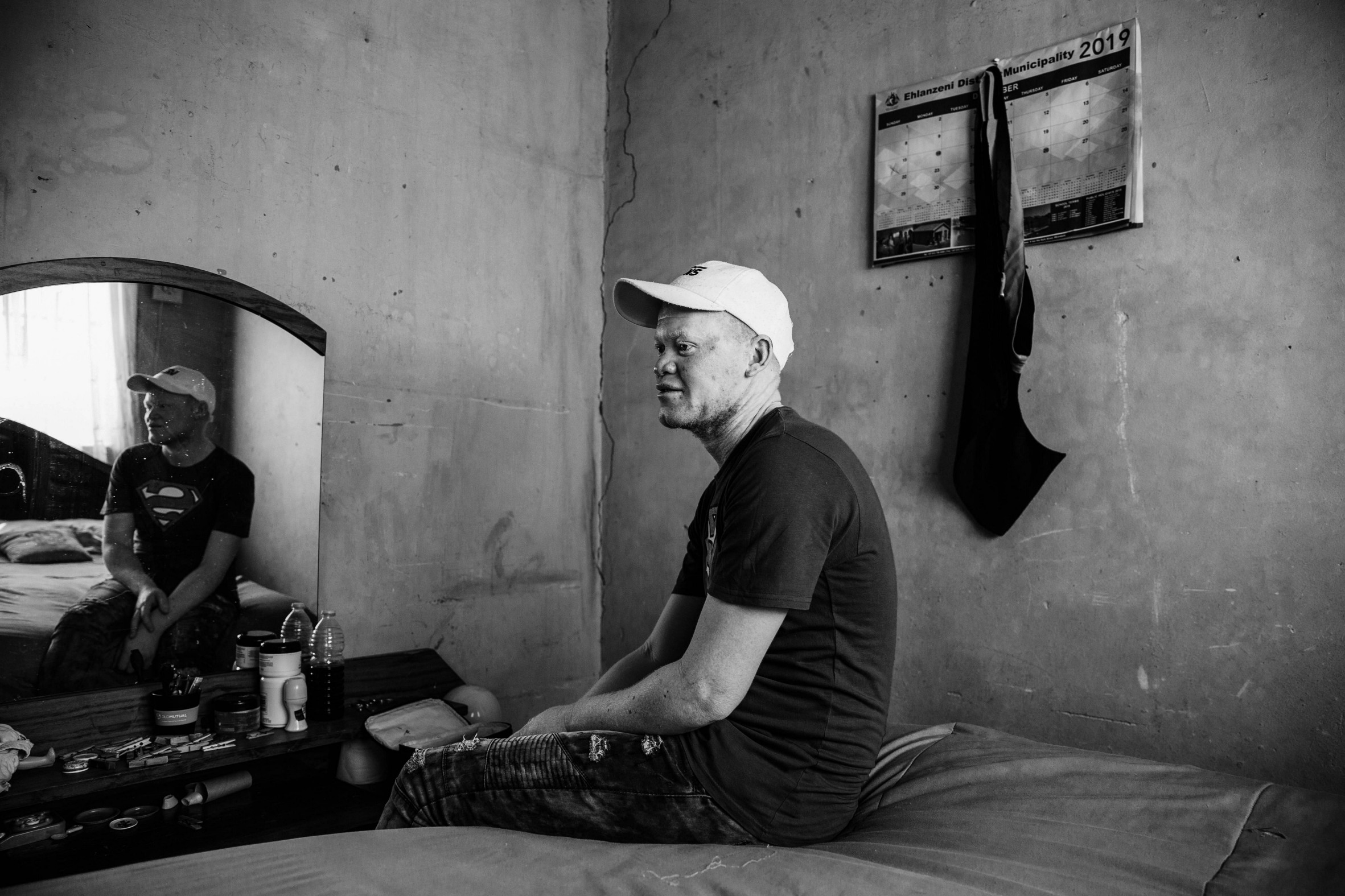 Siboniso Hlophe, 28, a fellow Swazi who also has albinism, lives nearby with Jane Moyo, a 92-year-old woman who took him in when he came to South Africa.

He helps Zitha and does advocacy work for the Ehlanzeni Disability Forum in the area. Otherwise, he is unemployed.

I am a human who is different from others.

For Hlophe, it was also the stigma, stares and comments from passersby that was a bigger issue than the health complications or challenges he experienced from albinism. “People, you know, they will be funny and treat you funny. But I decided to tell myself ‘I am not going to take what people say to my heart.’ I was 12 when I told myself that. Like that I will survive. 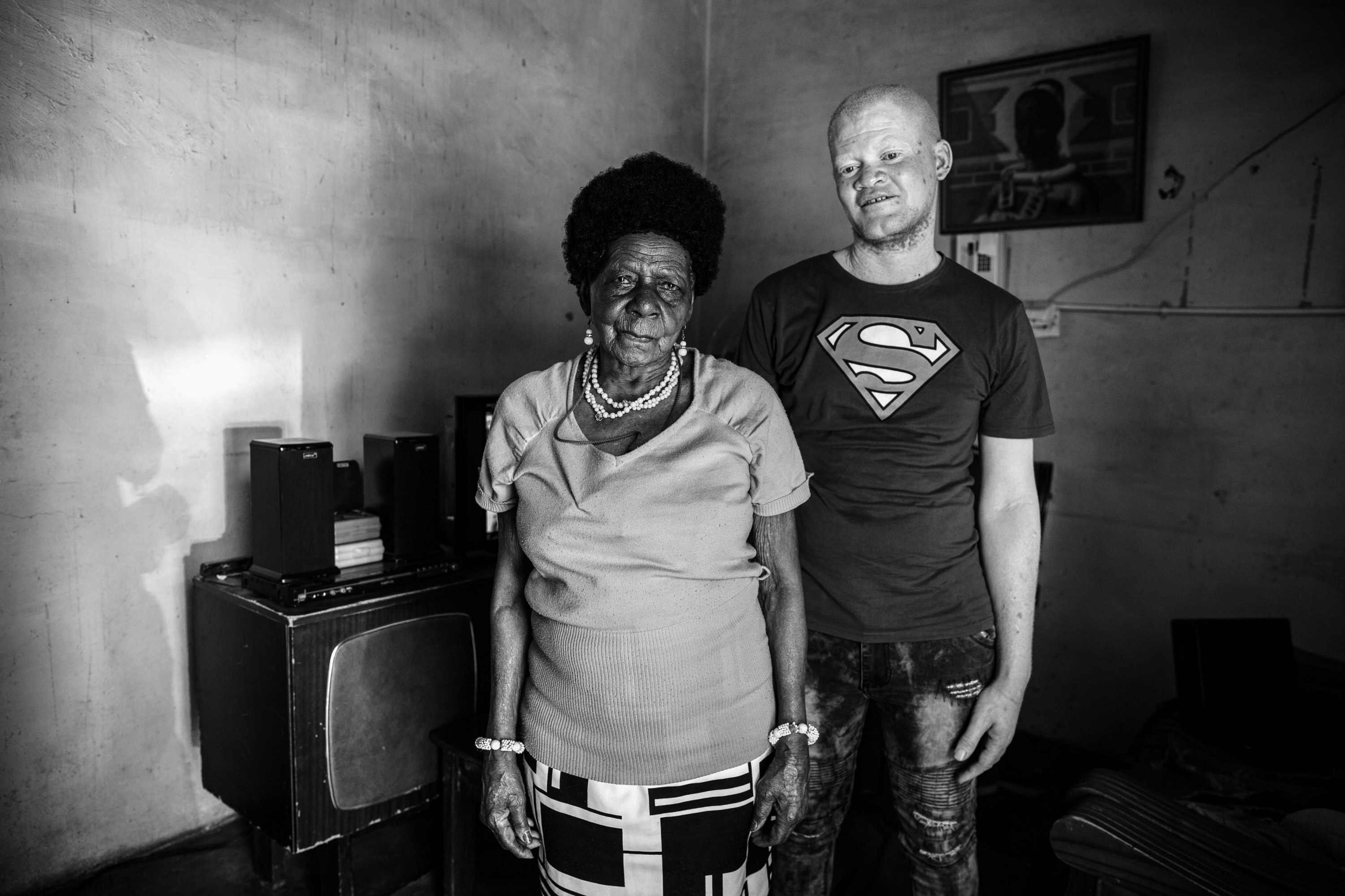 Siboniso with Jane Moyo, 92, who has welcomed him into her home.

Hlophe said he didn’t initially understand why people with albinism were considered for assistance with the Ehlanzeni Disability Forum. “To be honest, I didn’t understand it. I just tell myself, ‘I am a human who is different from others.’ Until I joined the forum. Then I came to understand.”

The Endless Journey
Stories of migration and courage. This project was made in partnership with Wits University’s African Centre for Migration and Society (ACMS) and the International Organization for Migration (IOM) with funding from the Irish Embassy.