Sheikh Faruk Ahmed is being profiled by a Prottasha  field officer in Khulna for psychosocial and financial support. Photo: BRAC

Sheikh Faruk Ahmed, like many other young men in his community, finished primary school but couldn’t afford to attend high school. From the age of 14 he worked to support his family but, since he lacked academic qualifications, he couldn’t secure well-paid, permanent jobs and ultimately struggled to earn enough to support those who relied on him. In Bangladesh, he was just one of the 2.2 million young job seekers who join the labour force every year, most of whom cannot be absorbed by the domestic labour market.

With very little viable options available to him, Faruk, like many of his peers, dreamed of going overseas. He employed the services of a broker, who charged him 500,000 Bangladeshi taka (BDT) or about USD 5,925 and in 2012 flew him to Libya. For a few years he worked as a painter in a factory, but when conflict broke out in Libya his income declined, and he decided to travel to Italy to find a better paid job in a safer environment. Once again, he reached out to a smuggler who arranged for him to travel to Italy in 2015. 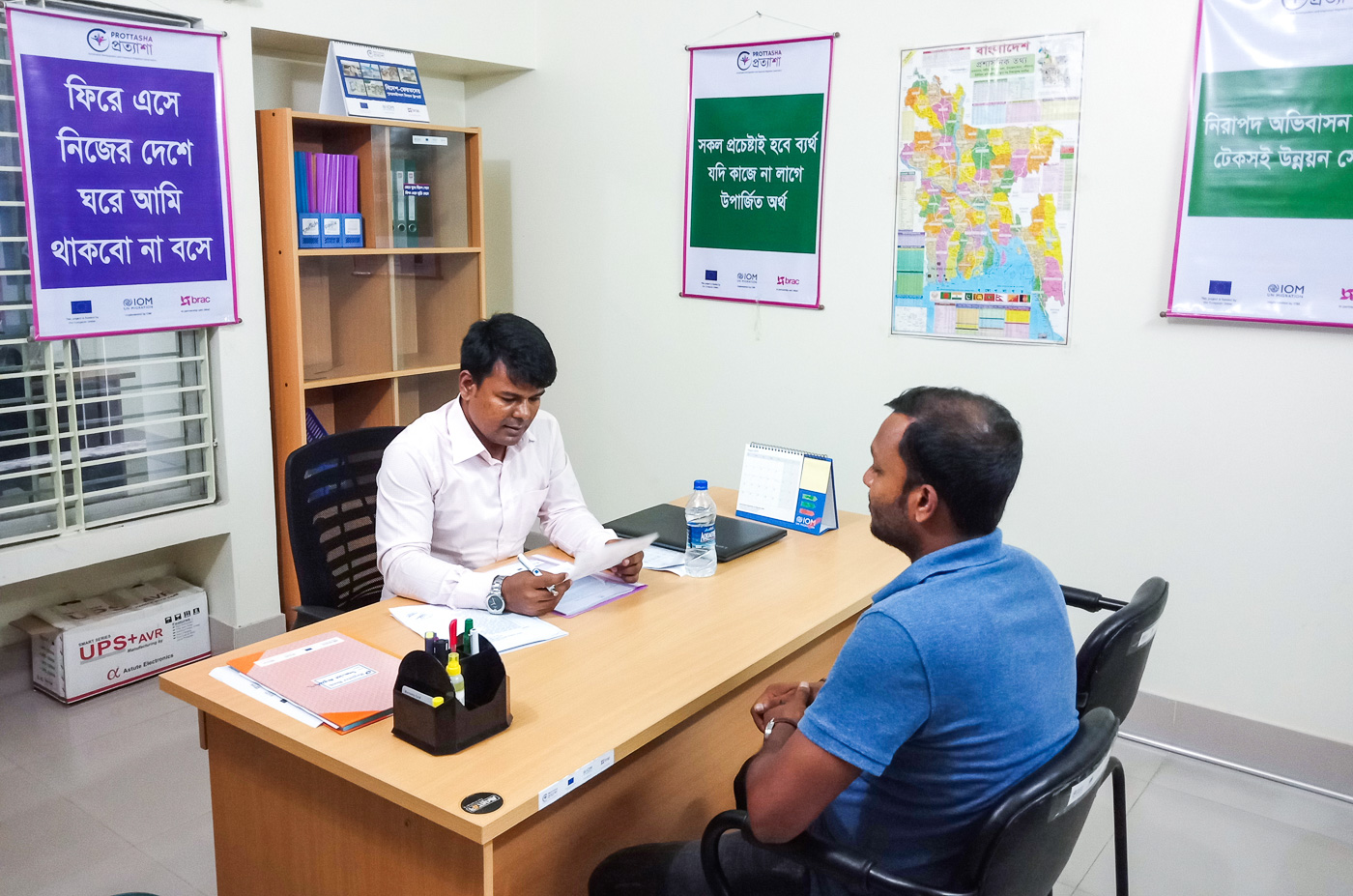 The journey to Europe, across the Mediterranean Sea was both dangerous and frightening. Although he failed in his goal to reach and find work in Europe, he considered himself to be lucky once he was actually rescued at sea by the Italian coastguard. Tragically, hundreds of migrants die each year trying to cross from North Africa to Europe.

After he was rescued, Faruk was moved to an asylum centre where life was hard, and he was ultimately unsuccessful in his desperate attempts to secure documentation that would allow him to live and work in Italy. In 2019, he decided to return to Bangladesh and on 25 April he landed in Dhaka after four years away. 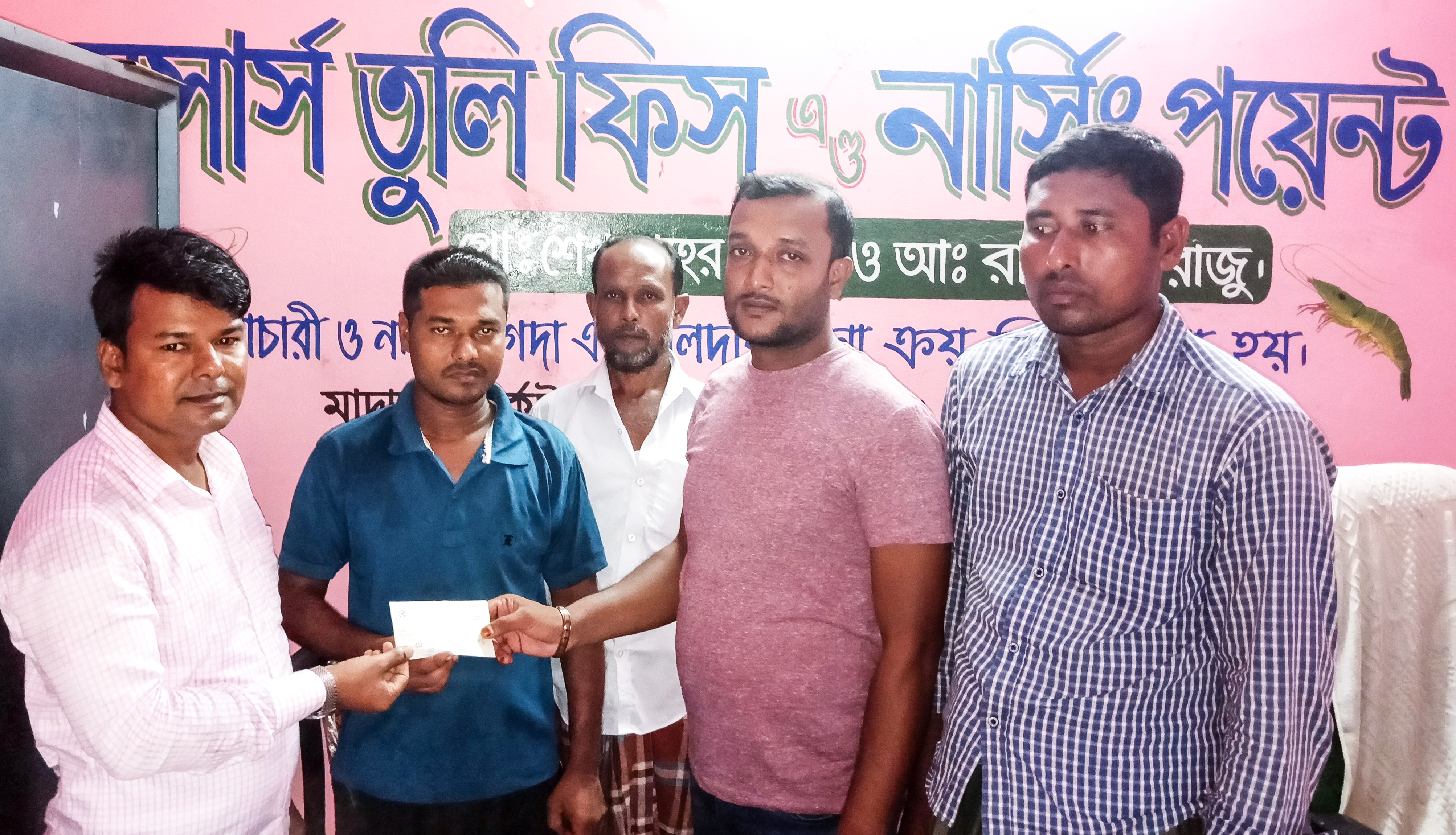 Faruk Ahmed receives in-kind support from the Prottasha project. It has helped him to start a shrimp fish cultivation business. Photo: BRAC

Unfortunately, Faruk’s story is not uncommon and highlights the plight of vulnerable migrants who are at the mercy of smugglers, human traffickers, and exploitative employers. While Faruk was able to return home, many others do not always have that option within easy reach. Migrants need information on safe, regular migration so that they can make informed decisions.

After Faruk's return, a member of the Migration Forum of Paikgacha sub-district in Khulna, Bangladesh, found him to be in dire need of support. The forum member then connected him with the Prottasha project office in the district for reintegration support. Prottasha, officially known as Bangladesh: Sustainable Reintegration and Improved Migration Governance, is a government-led, European Union-funded project. 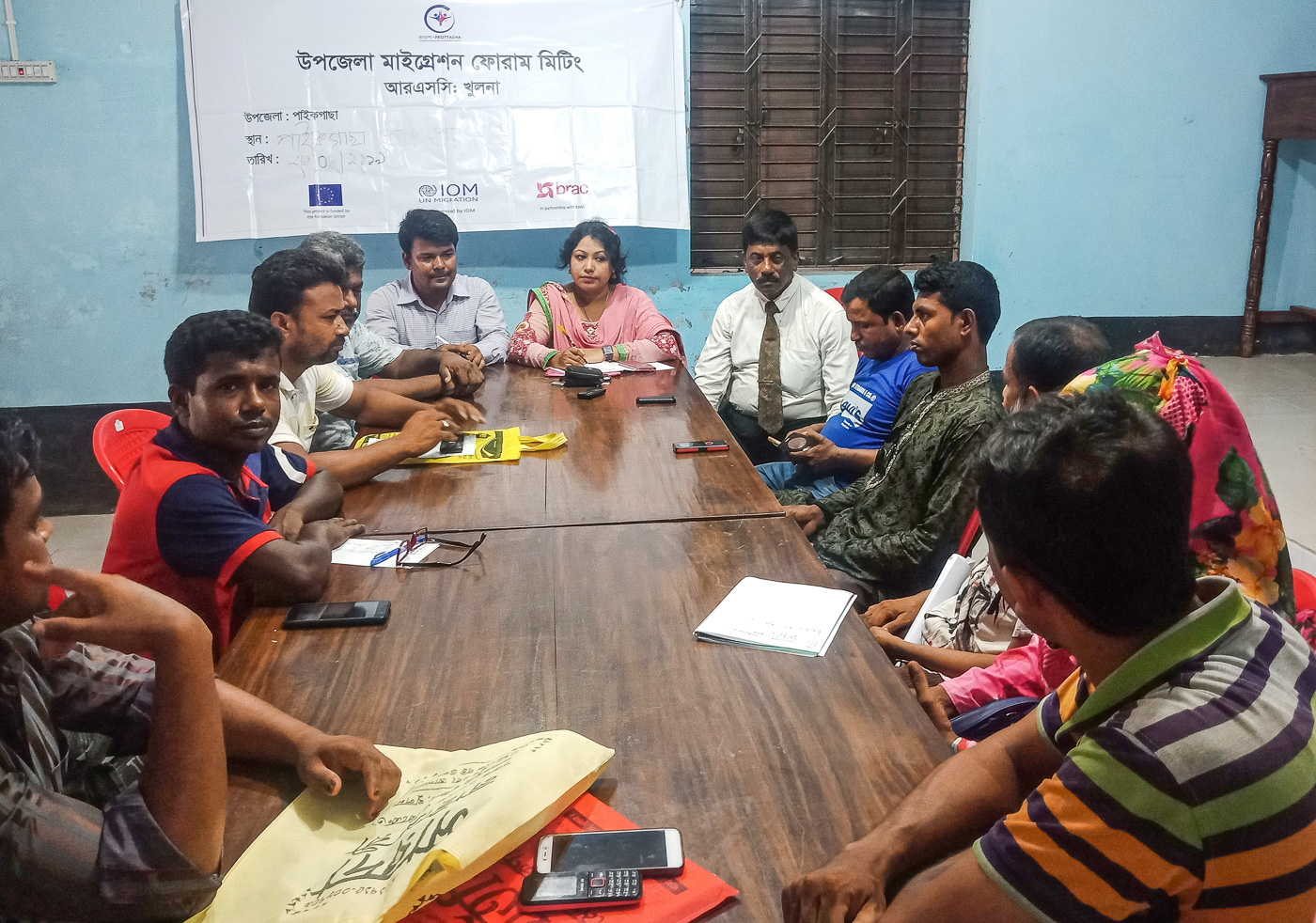 Since 2017, the International Organization for Migration (IOM) in Bangladesh, in partnership with the NGO BRAC, has been supporting this project. The main objectives are building migration governance capacity, raising awareness on safe migration, and supporting the sustainable reintegration of returning migrant workers. The project outcomes particularly contribute to the achievement of Sustainable Development Goal (SDG) 10.

Through Prottasha, Faruk was provided with counselling and psychosocial support and over time he recovered from his trauma. The project also provided livelihood diversification training and supported him in launching his own shrimp fish cultivation business. 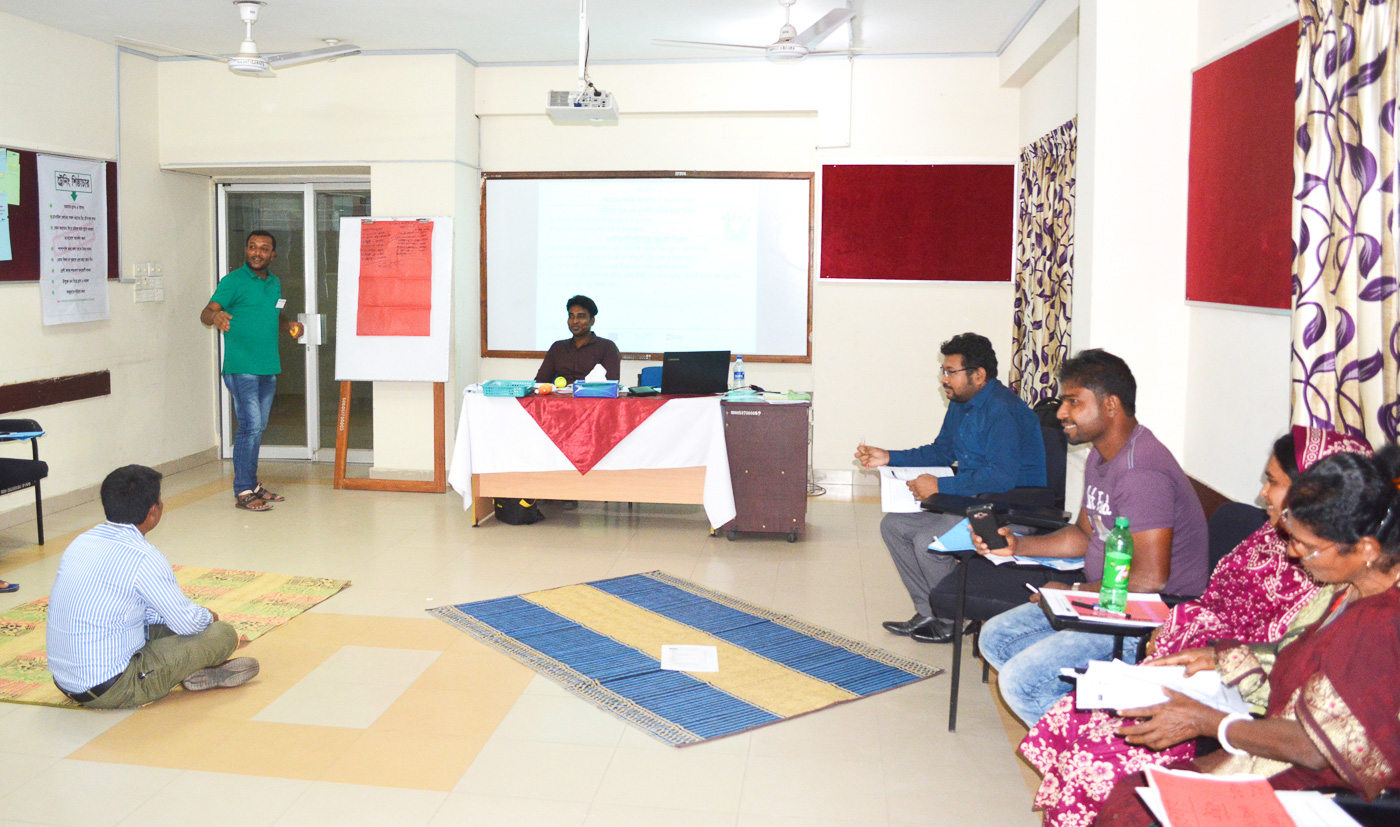 With counselling, Faruk realized that his life would have been very different if he had been better informed before leaving Bangladesh. He was determined to help other people who may be confronted with similar challenges, so he joined the local Migration Forum Committee which includes teachers, religious leaders, businessmen, and returnee migrants from the local community and helps to sensitize the community, especially aspiring migrants, on the benefits of safe migration, the importance of reintegration, and the need for remittance management.

As a Forum member, Faruk is responsible for making potential migrants aware of the risks of irregular migration, helps them improve their knowledge of their rights as migrants, and provides them with information so they can make informed decisions. He regularly shares his experience, usually emphasizing that he is very lucky to be alive. He also helps families manage the remittances they receive.

Faruk Ahmed talks to the local people at a tea stall in Paikgacha on safe migration. Photo: BRAC

Faruk feels satisfied helping potential migrants to make informed decisions. “I consider myself lucky to be a part of this noble activity. I don’t want any of my community brothers or sisters to experience what I was a victim of. That’s my only wish until I die,” he says.

Through his volunteer work, Faruk has helped other migrants, such as arranging community arbitration to return BDT 250,000 (USD 2,962) to a migrant who was a victim of forgery; or preventing a woman migrant from paying BDT 30,000 (USD 355) to a deceitful broker; or encouraging a returnee from Italy to invest in assets that would generate a better return than building a house.

Faruk’s involvement in the community has not gone unnoticed. “It is a great pleasure to observe one returnee, who went through a lot, now helping others not to face the same situation,” said Bebasish Torofder, a Prottasha project field organizer. “Faruk is not only helping us in raising awareness across the community but also making our work much easier.” 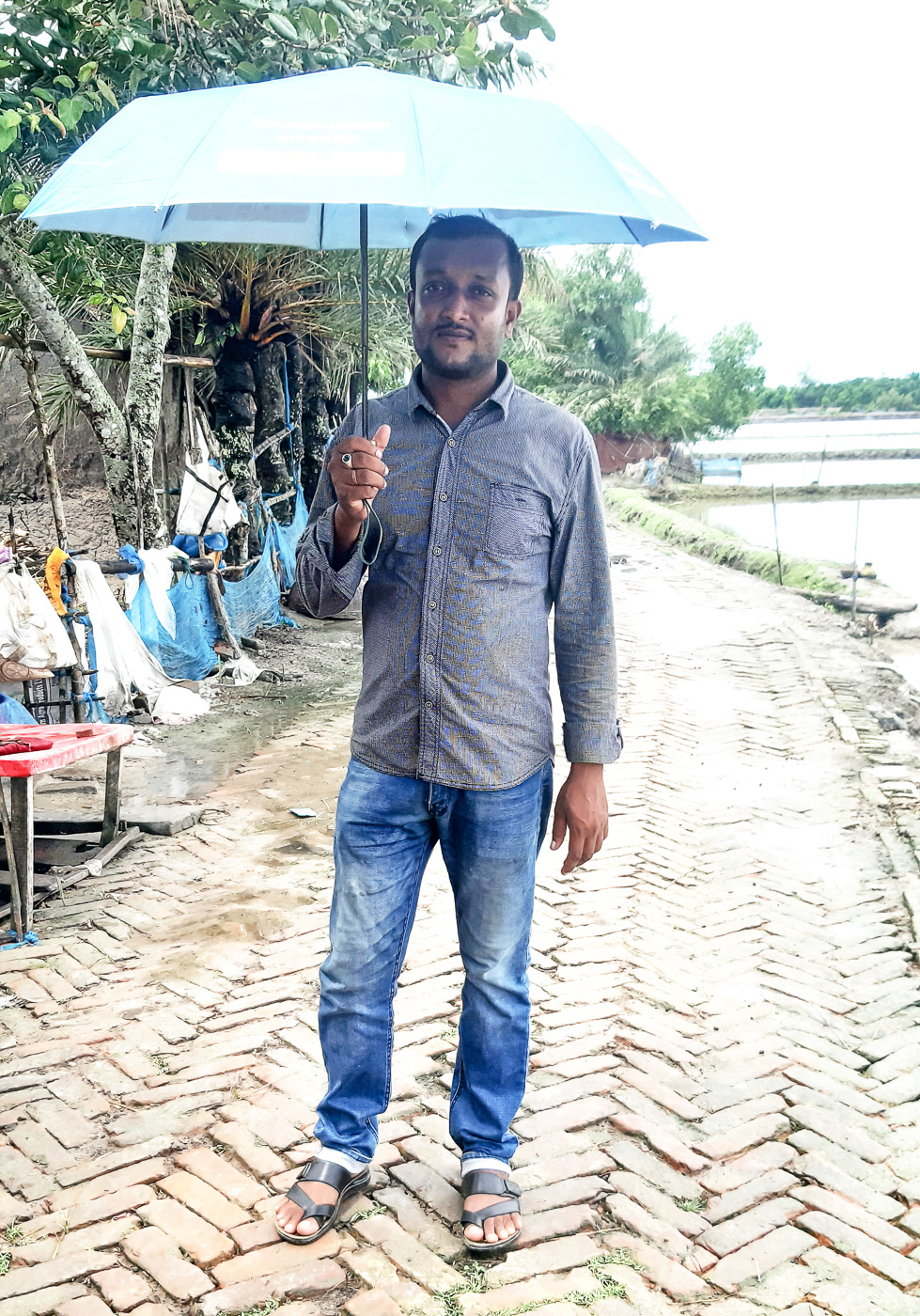 Faruk Ahmed in his community in Paikgacha, Khulna. Photo: BRAC

It is through awareness-raising initiatives and the work of active migration forums, like Faruk’s, that communities have greater knowledge on migration including information on cost, routes, remittance management, reintegration support, and the various skills needed for job markets abroad.

Through Prottasha, migration forums have been established in 60 sub-districts across Bangladesh and, through the awareness-raising initiatives, members of the community can approach migration-focused organizations and government authorities for information and advice. This has resulted in improved migration governance at the district level and contributed to reducing the vulnerability of potential migrants to exploitation and human trafficking.