David Escabal and his family lost everything as Typhoon Rai swept away their hometown in 2021. Photo: IOM/Andrea Empamano

Cagniog, Surigao City, 3 January 2023 – A little over a year ago, David Escabal, 62, remembers peering through the window of the local high-school-turned-evacuation-centre as Typhoon Rai (local name: Odette) made landfall in Surigao City in Mindanao, southern Philippines. David’s family, together with hundreds of others, hunkered down as violent winds reaching 260 kilometres per hour battered the region during the category 5 super typhoon.

“It was the strongest typhoon we ever felt. It was like we were about to be blown away because the school building was shaking so much,” David shares.

David and his family lived in the coastal neighbourhood of San Juan. Living by the sea meant he was no stranger to storms and evacuation measures. So, when the local government informed residents to evacuate to higher ground prior to Rai’s arrival, he did not expect anything extraordinary and left many of his belongings behind. Initially classified as a category 1 typhoon, Rai quickly intensified into a category 5 super typhoon within 24 hours and caught many residents off guard. After previous storm evacuations, David had always returned home. This time was different and there was nothing to return to – including his house.

“We lived in our old home by the sea for almost 30 years. Now, we can never return. Super Typhoon Rai destroyed everything and swept away the entire house. Nothing can be seen anymore. Everything is gone,” he said.

While the Philippines experiences about 20 tropical cyclones per year, the climate crisis has brought stronger and more frequent typhoons to countries in the Pacific region, leaving millions of homes destroyed, and power and water supplies severely crippled. 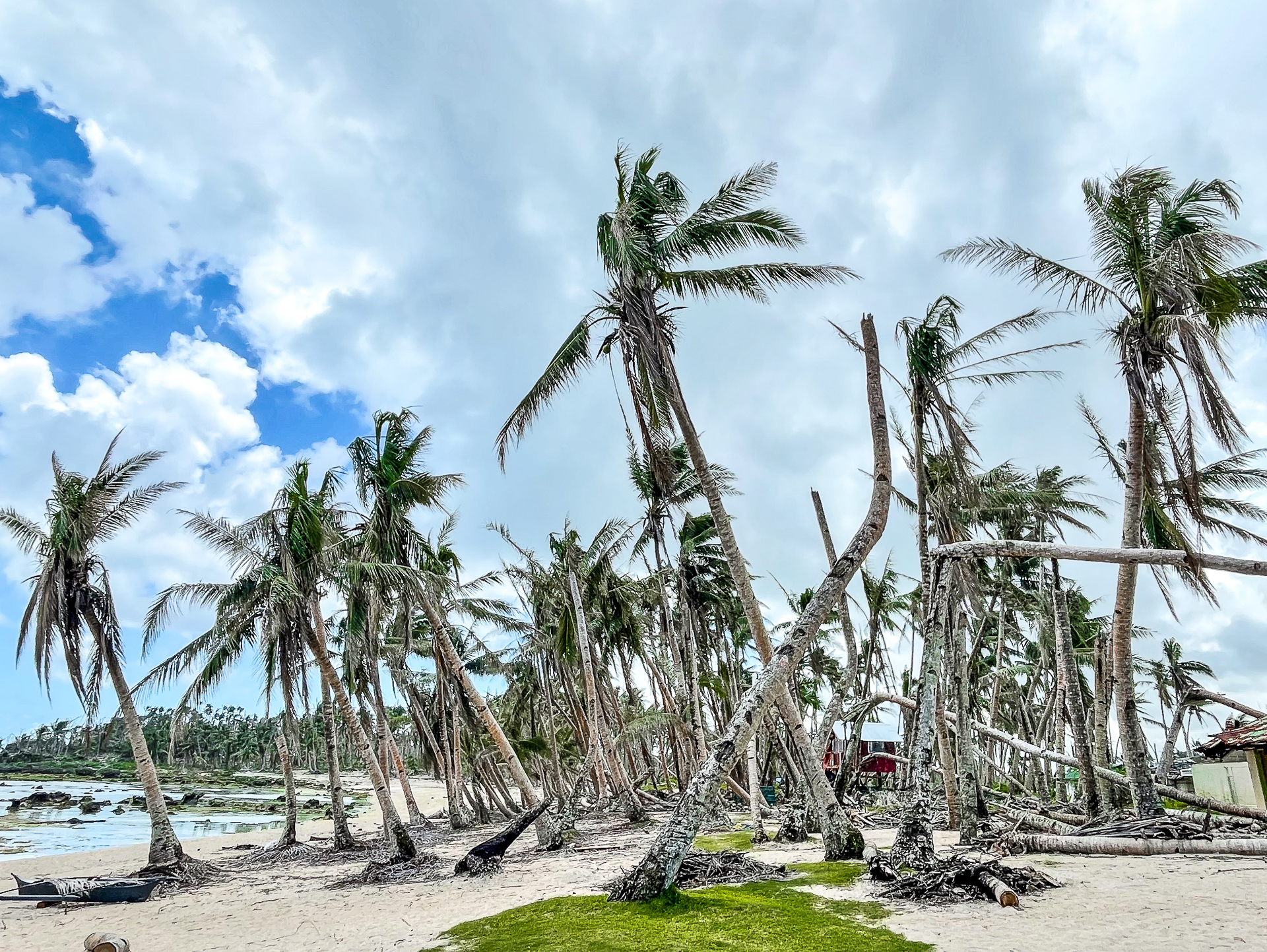 David recounts that it was difficult to find anything to eat the day after Rai hit because everything was in ruins. There was no power in the entire region and many areas were still flooded with water and debris, and just walking outside was dangerous. Help began to arrive a few days later, providing them with water, food and other basics, but they were homeless. 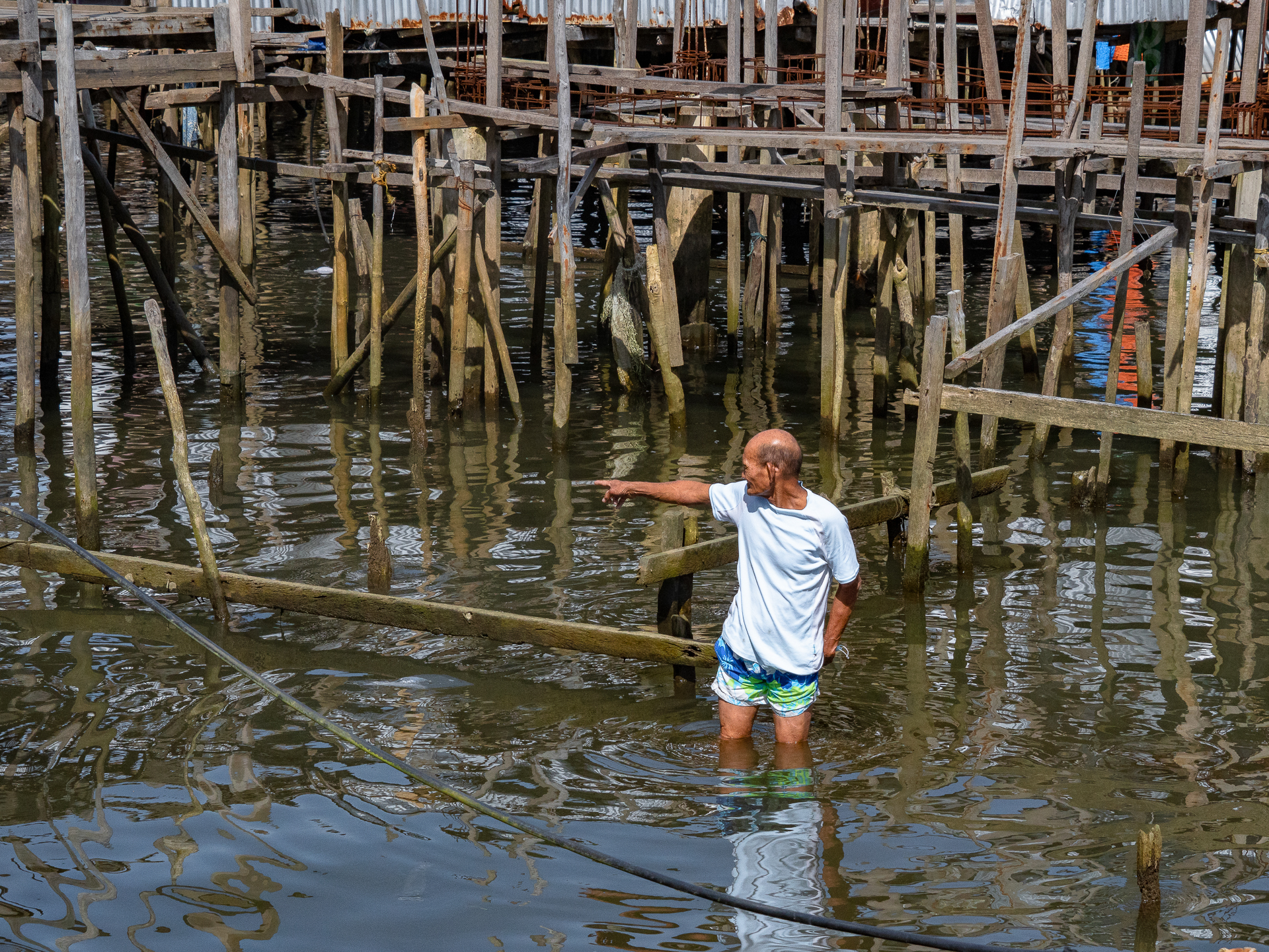 David visits the coastal town of San Juan, pointing to where his original home used to stand over the water. Photo: IOM/Andrea Empamano

As part of the International Organization for Migration’s (IOM) emergency response for communities most affected by Super Typhoon Rai, transitional shelters were built to help families during their recovery.

David has worked as a carpenter for 32 years and was chosen as one of the beneficiaries for a cash-for-work programme to help build the transitional shelters. He was part of an initial group of carpenters from affected communities who began the construction of 123 shelters in Barangay Cagniog, Surigao City. These shelters were eventually provided to families like David’s, who had been living in evacuation centres for five months.

“We were hired to build our own homes and the homes of our community members who lost everything to the typhoon. I helped build 10 houses here in the community together with my neighbours. This helped us so much since a lot of us didn’t have work opportunities then,” David recalls. The money he has earned has helped his family with their day-to-day needs and has allowed him to purchase two motorcycles for his family to use.

IOM’s emergency response for those affected by Typhoon Rai included the building of transitional shelters. David, a skilled carpenter, was hired to help in this endeavor. Photo: IOM/Andrea Empamano

In coordination with the local government, the Technical Education and Skills Development Authority also provided training to other community members who wanted to help, providing them with skills in carpentry, masonry and electrical work. A total of 586 people were hired to complete the Cagniog Transitional Shelters, while an additional 92 built water catchment systems and gutter work to provide families with a water source.

The skills taught to those in affected communities has provided additional livelihood options as they move forward, particularly when their skills are in high demand to help rebuild the city and neighbouring provinces — empowering them as they continue to build back what they have lost.

Today, David continues his carpentry work while also serving as the president of the homeowners’ association in Cagniog. He shares that many families have begun to feel safer living there again, and there is a strong sense of community with members earning income through cash-for-work while also collectively making community spaces for everyone.

For instance, a community garden has been established where families can grow vegetables, as well as a community kitchen where families without cooking supplies can prepare food. They also have their own tanod (community peacekeeping) system which helps keep the community safe, especially at night.

After months of uncertainty, David says he is happy to finally have a new place to call home.

The cash-for-work initiative for the construction of the Cagniog Transitional Shelters is part of IOM’s Emergency Response for Super Typhoon Rai affected communities funded by the Government of Australia, the Government of Canada, the Government of Japan and USAID’s Bureau for Humanitarian Assistance. Cash-for-work beneficiaries were also hired to help build transitional and safe room shelters across the provinces of Surigao del Norte, Dinagat Islands and Southern Leyte. This initiative aims to provide affected communities with livelihood opportunities during recovery – empowering families as they continue to build back better and strengthening their resilience to future disasters.

This story was written by Andrea Empamano, Media and Communications Project Assistant at IOM Philippines.