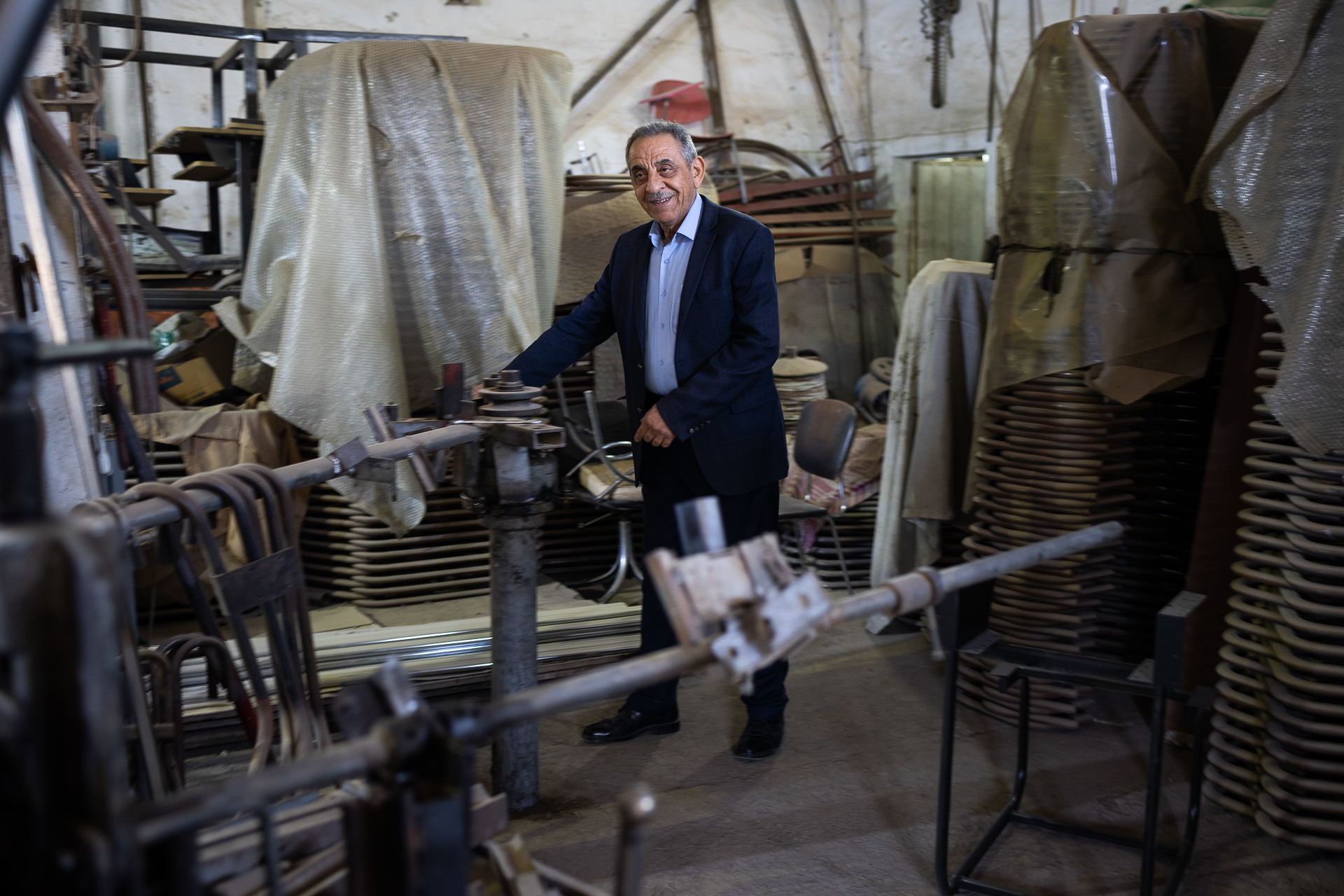 Estabraq demonstrates how a machine works in his factory. Photo: IOM Iraq

Baghdad, 31 October 2022 – In its 38 years, the Baghdad Company has overcome setbacks time and time again.

Its owner, Estabraq Gabar Muhdi, started the furniture company alongside his older brother who was called to military service soon after launching the business. When Estabraq received the devastating news that his brother was killed in action, he had to make the tough decision to try to grow the business on his own.

From 2006-2008, during the Shia-Sunni fighting of the Iraqi Civil War, the Baghdad neighbourhood where the company was located became inaccessible. Because of the violence at the time, Estabraq and his family were displaced, residing in Jordan for two years before they could return home.

In 2014, a little over five years after their return, the onset of the conflict between the Islamic State of Iraq and the Levant (ISIL) had a devastating impact on the country, internally displacing over 6 million people across Iraq. As of December 2021, 80 per cent of those displaced have returned to their areas of origin, while 20 per cent remain in displacement – the majority spread across Ninewa, Dohuk, and Erbil governorates.

Today, potholes and jagged rocks speckle the road leading to the factory. Many of the surrounding buildings are in disrepair or completely destroyed. For Estabraq, rebuilding here meant overcoming more than just the past traumas of war. 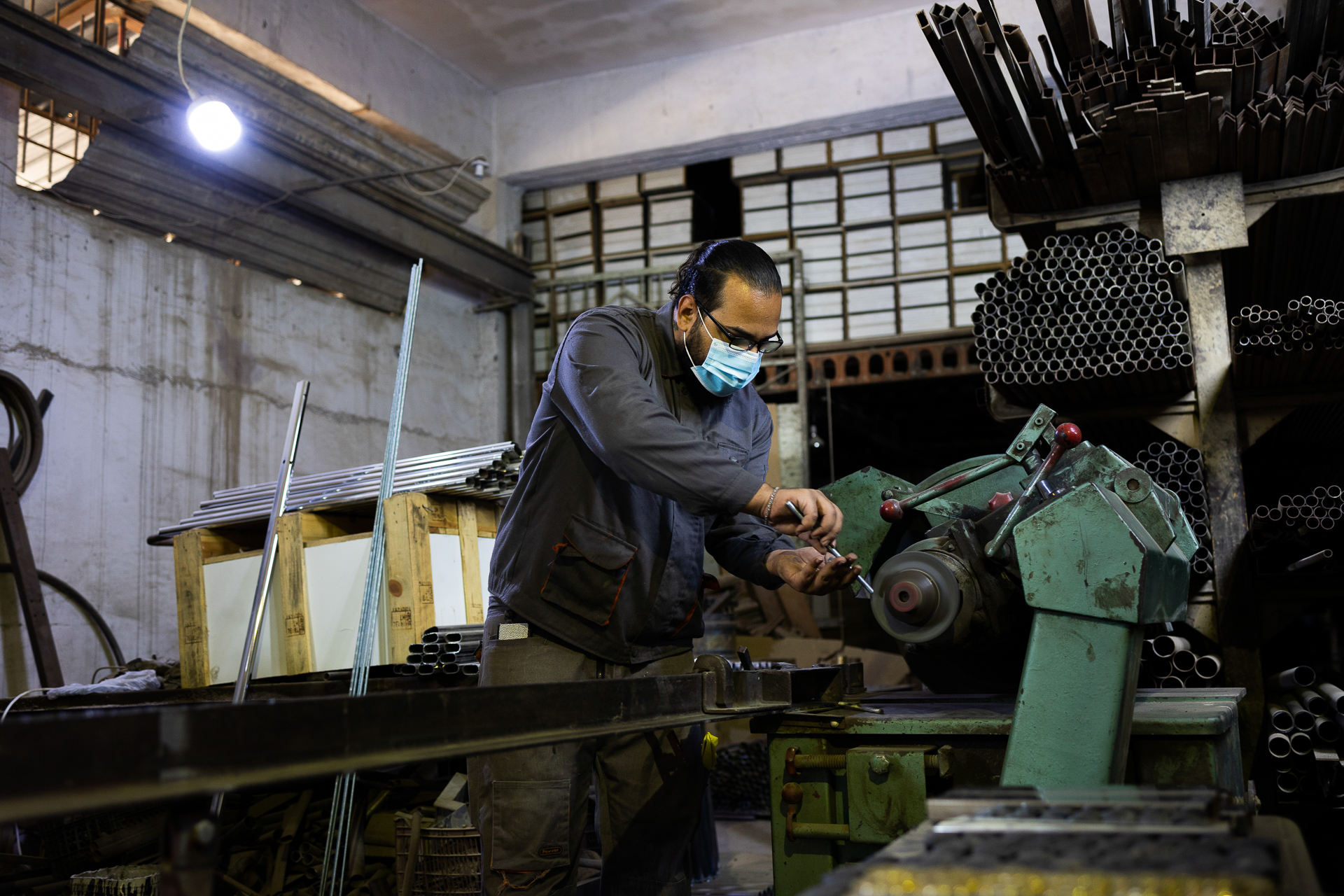 Estabraq is a victim of militia extortion and has survived multiple assassination and kidnapping attempts. “It’s like paying double taxes to run a business here,” he sighs.

Despite these setbacks, Estabraq has remained steadfast on his quest to grow his business. At the shop, employees describe him as fair and caring. In some instances, he has gone above and beyond to invest in his staff’s career development, training new, unskilled employees and giving them rare opportunities to learn in Baghdad.

Estabraq takes pride – and teaches his team to take pride – in precision.

“Everything fits, down to the millimetre,” says 31-year-old Salih Thaeer.

Salih speaks a confident yet casual English – a skill he acquired while translating for the US Government for almost a year in 2008. At that time, it was highly dangerous to work with the United States, not just for the translators but also for their families, who could become victims of retaliation for what was seen as traitorous collaboration. 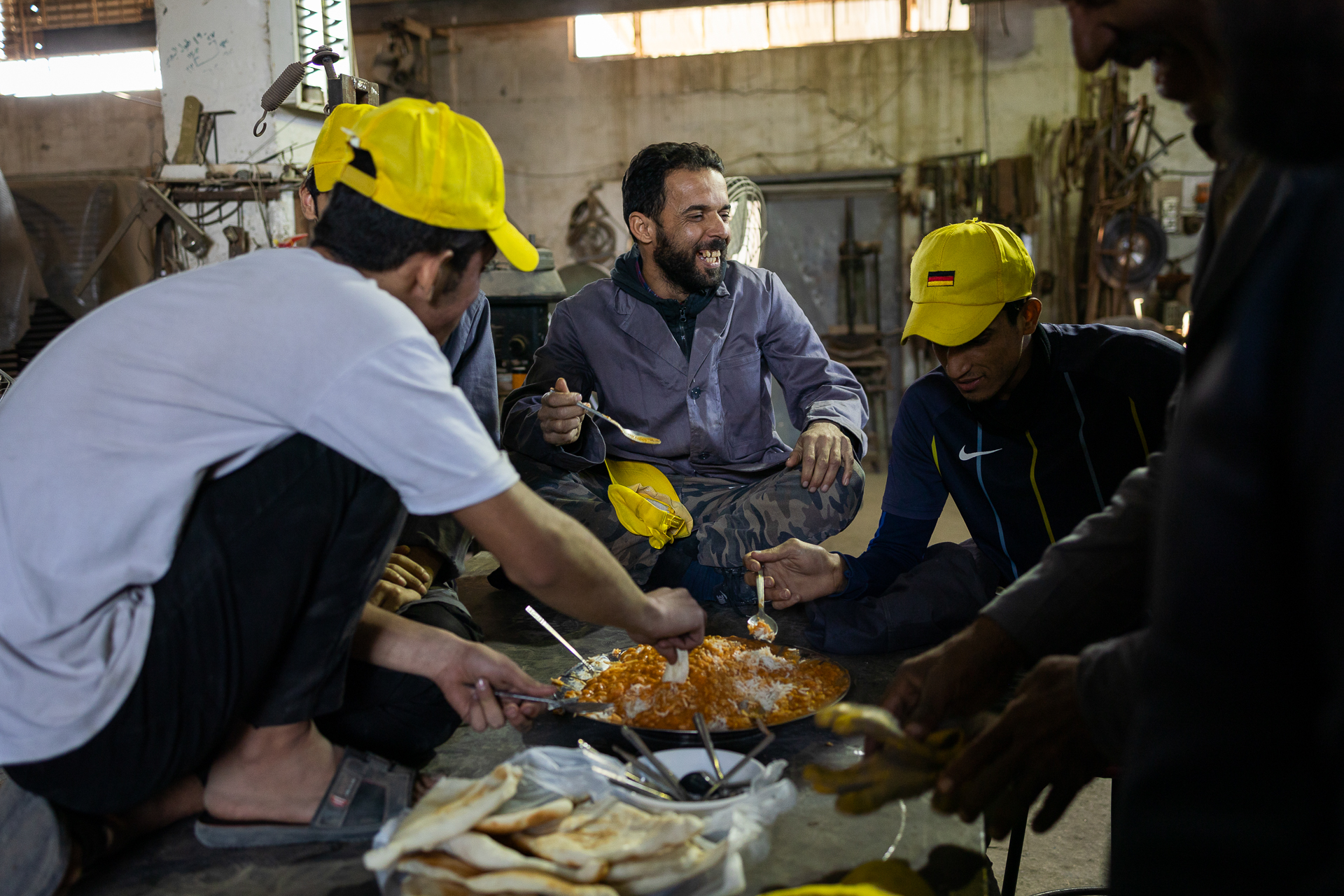 At the Baghdad factory, workers receive regular breakfast and lunch meals as part of the benefits. Photo: IOM Iraq

Salih planned to apply for a Special Immigrant Visa at the end of his time as a translator, but the troops pulled out of Baghdad before he’d worked long enough to meet the length-of-service requirements. For the next seven years, Salih was out of work – until Estabraq gave him a job at the factory in 2016.

He now supports his entire family, including his sister, who couldn’t find work after graduating from college; his brother who was injured in a car accident that left him unable to work for several months; and his parents who lost their auto-repair business after ISIL hijacked multiple shipments of car-repair supplies, leaving them in debt.

“After the losses we suffered, I’m slowly getting back on my feet,” he explains.

Hassen Alcoy Hessen, 45, meanwhile, has been at the factory for five years, working as a blacksmith and a foreman. His job at the factory enabled him to send his son to college and keep his two younger daughters in school.

The compounded impact of COVID-19 on a country rebuilding from war and conflict has had a negative effect on the economy and livelihoods among a wide range of Iraqis, including those previously displaced.

One of the workers in the Bagdad factory moves a table frame to the workstation. Photo: IOM Iraq

Employment offered by small and medium and enterprises (SMEs) like Estabraq's is enabling families to be able to meet their daily needs while also contributing to the local economy. Through financial support offered by the International Organization for Migration's (IOM) Enterprise Development Fund (EDF), these businesses have been able to not only stay afloat through these challenges but grow.

“The new machines we were able to purchase using EDF transformed the quality of our products and drastically reduced the time spent making them,” says Hassen.

He adds that, in addition to ensuring competitive pay at the factory, Estabraq allows him to use the tools and raw materials to make furniture and gifts for his family, like their dining room table and a planter that he recently gifted his wife.

“I feel lucky to work for [Estabraq],” Hassen declares.