In addition to the toll COVID-19 has taken on our physical health, the United Nations has warned of a global mental health epidemic that could last for generations. This was addressed in the recent Policy Brief of the Secretary-General "COVID-19 and the Need for Action on Mental Health".

That call was echoed on the snowy streets of Ukraine, where massive blue masks on the main squares brought attention to the mental health aspect of the current crisis. 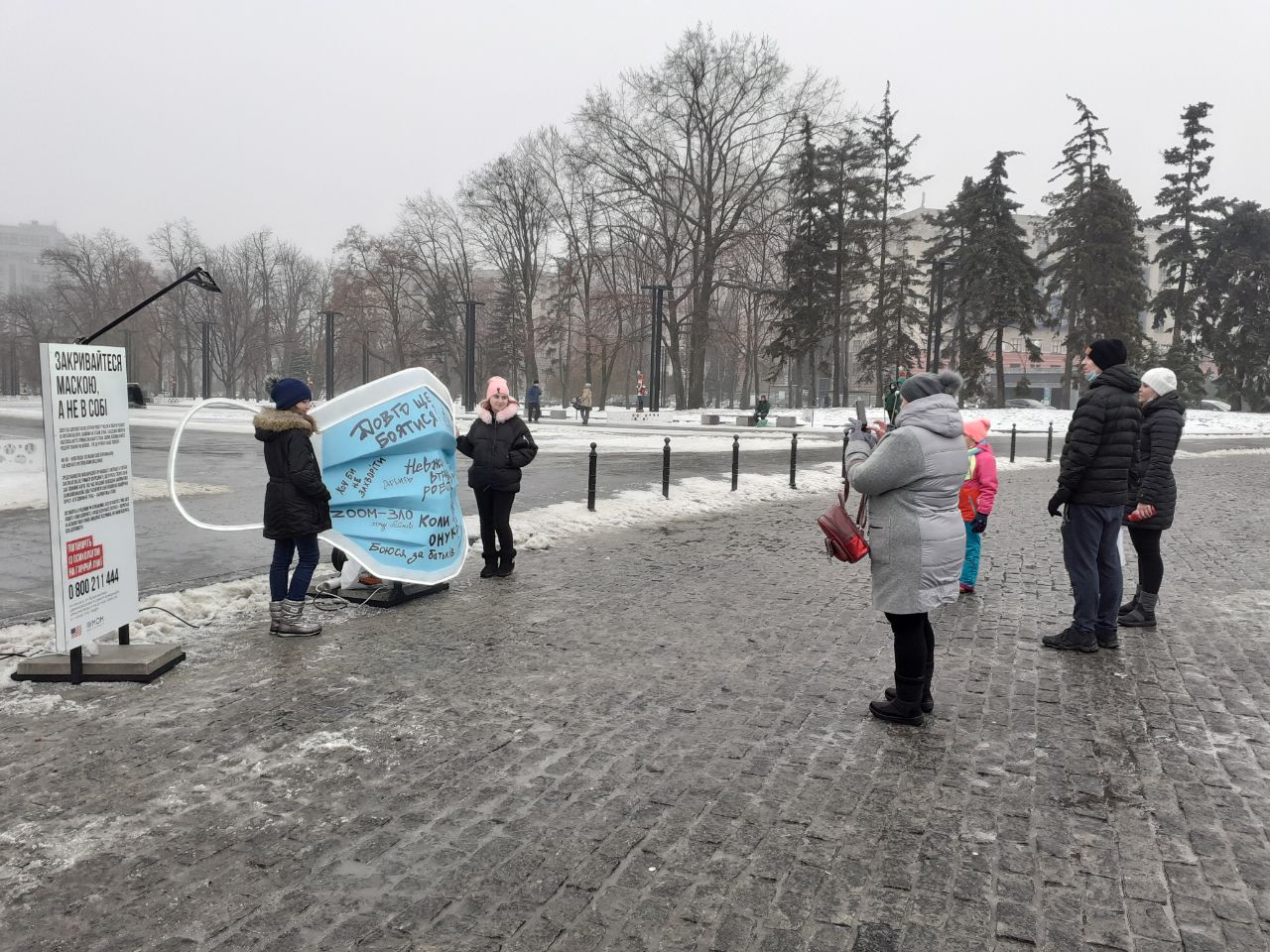 Passers-by stop for a snap with IOM’s “Wear Your Mask; Don’t Mask Your Feelings” campaign.

“Wear Your Mask, Don’t Mask Your Feelings” was the slogan accompanying the International Organization for Migration (IOM)’s street installation in the two largest cities, Kyiv and Kharkiv.

Passers-by have been keen to snap photos and selfies, which helped the installation become popular on social media. 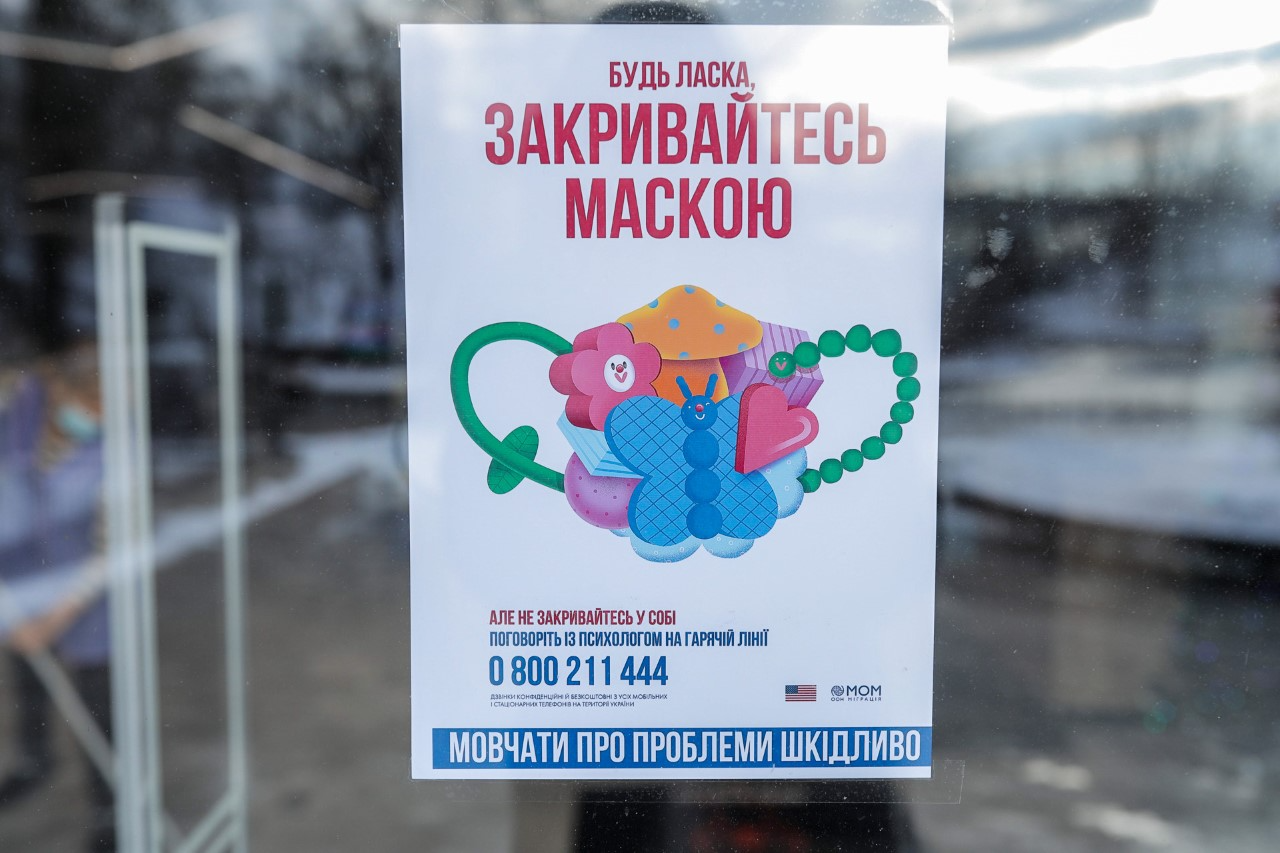 It also features the number of a toll-free emotional support hotline, operated by IOM and funded, like the entire action, by the US Department of State Bureau of Population, Refugees, and Migration (PRM).

The posters are available for download for shops, in particular pharmacies, and the general public.

“The issue of mental health is too important to ignore,” says IOM’s Dr. Risatul Islam.

“The ‘Don’t Mask Your Feelings’ action was the highlight of our campaign. Dozens of media and thousands of social media posters multiplied our campaign all over the country. A mask became a meme, and we’ve achieved what we were hoping to achieve: start a real conversation about mental health and the importance of emotional well-being.”

Since its launch, the hotline has received over 1,000 calls from all over the country, most of them coming from the Donetsk and Luhansk regions, which are the focus of the project funding the hotline. A similar number of counselling sessions have been provided by psychologists. People mostly report grappling with anxiety and fear, as well as problems with their partner and children, which have been exacerbated because of the quarantine and isolation. 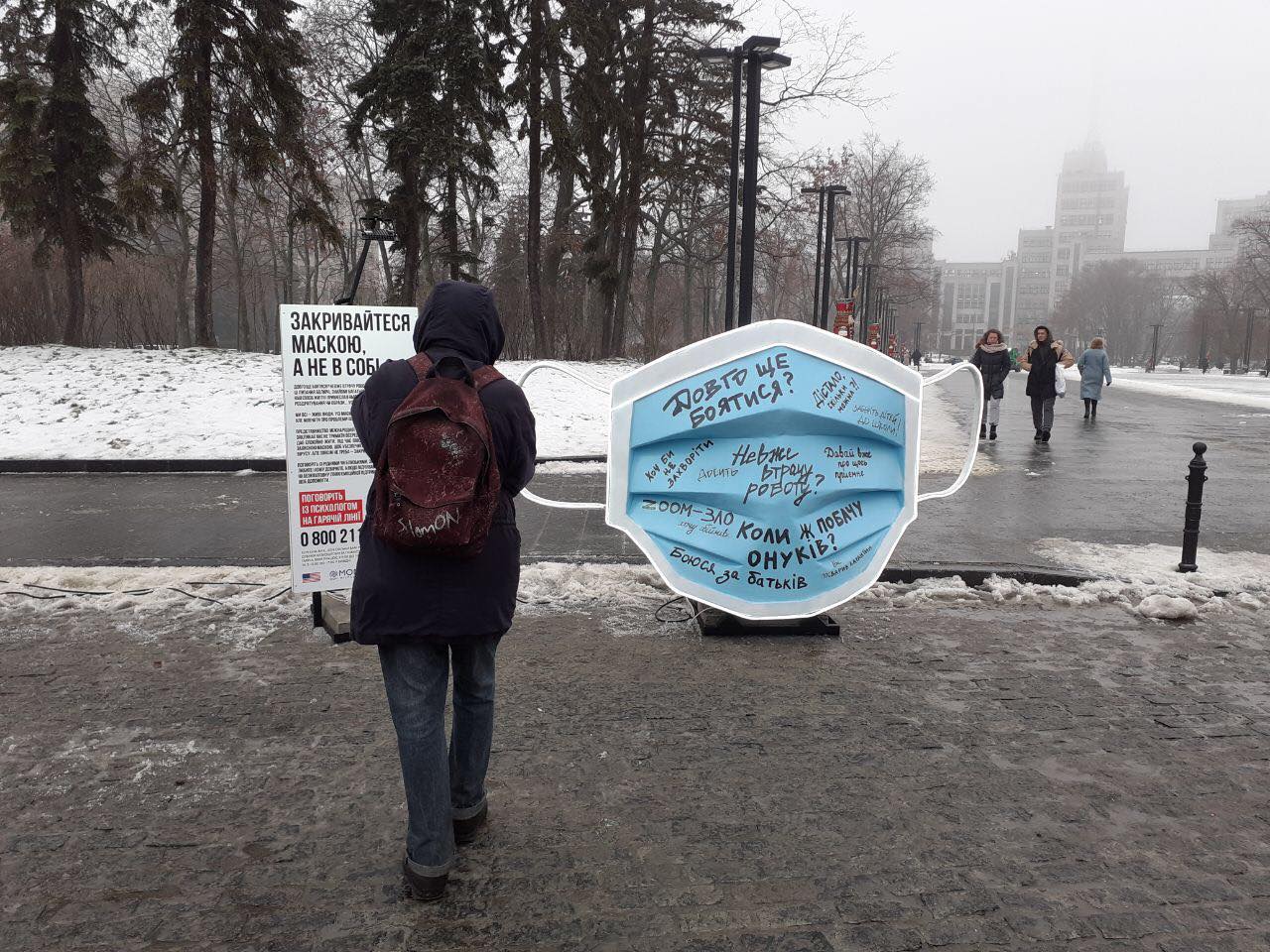 These 1.8-metre-high masks form the centrepiece of IOM mental health installations in the Ukrainian cities of Kyiv and Kharkiv.

As in many other countries, the pandemic is disproportionately affecting the most vulnerable in Ukraine.

In early 2020, reports of psychological issues spiked as conflict-affected communities struggled with the additional uncertainties brought by the outbreak of the pandemic and its effects on existing vulnerabilities. The impact on the elderly in conflict-affected eastern Ukraine is devastating. Most of them exist on meagre pensions and have become increasingly isolated.

Lockdowns and physical distancing have been equally disastrous for the economy of small communities, with predictable consequences on people’s well-being and mental health. IOM’s data shows that, among the displaced, 70 per cent of female-headed households have just enough money to feed themselves and their children. Nothing more. Women are taking on additional care roles within the family, which has been exacerbated by the closure of schools and social institutions. 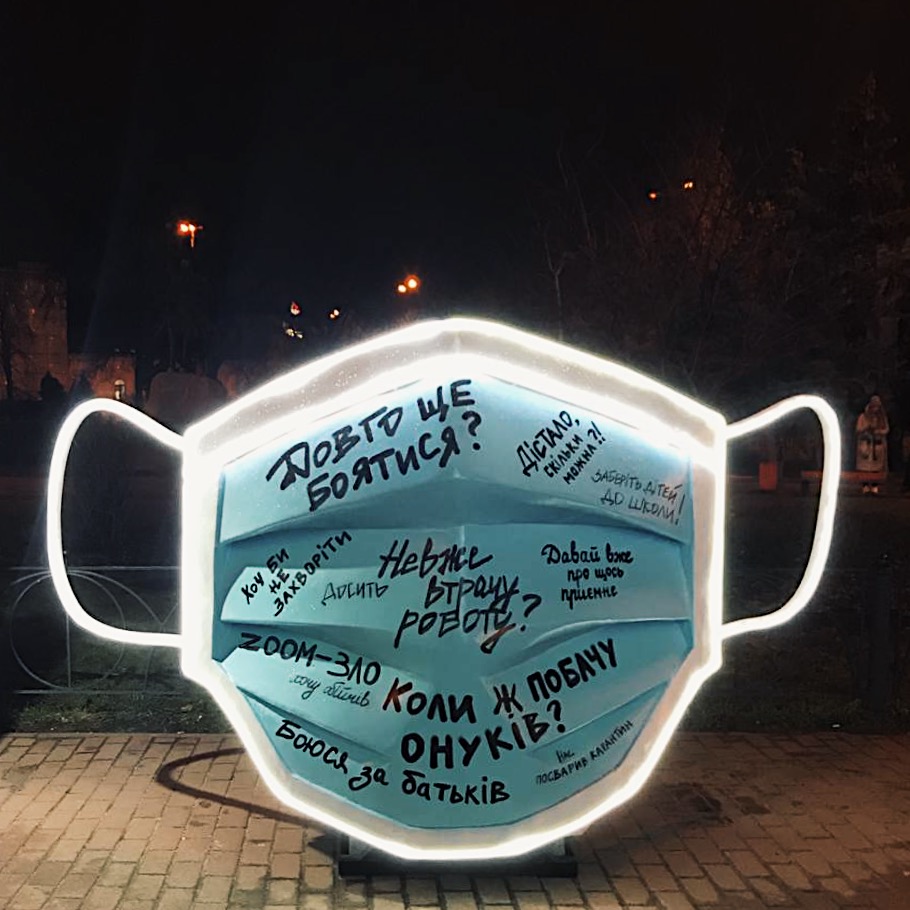 In November 2020, Ukraine’s Minister of Social Policy stated that the number of reported cases of domestic violence increased by 66 per cent over the year. She linked this worrying trend with the pandemic.

By Varvara Zhluktenko and Joe Lowry.